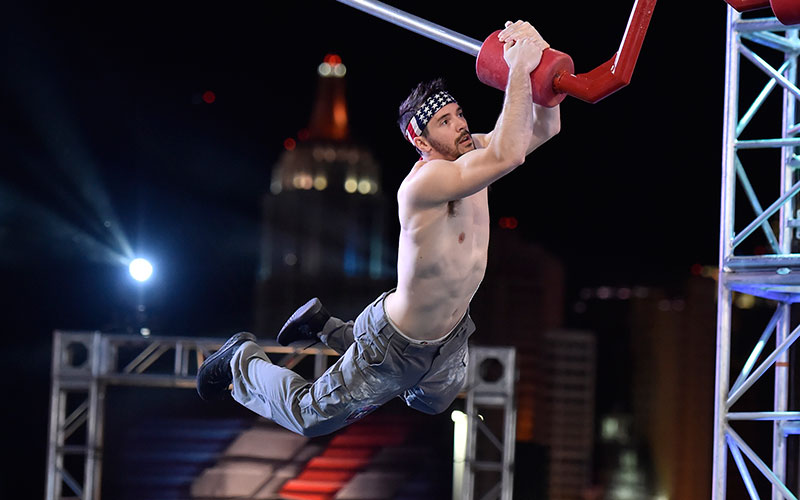 Drew Drechsel competing on stage three of the final course during the American Ninja Warrior season 11 "Las Vegas National Finals Night 4" episode, on which someone will win $1 million. (Photo by David Becker/NBC)

American Ninja Warrior has actually had only one winner in its 10 previous seasons, but that changes on Monday, when AWN season 11 concludes with someone finishing stage four and winning $1 million, becoming the show’s second-ever winner.

The male pronoun is not a spoiler by itself; only men made it to stage three of the Las Vegas finale, since all of the female contestants were eliminated during the second stage of the final obstacle course.

The dearth of previous winners may explain why NBC is spoiling the outcome, trying to create interest for its finale, though it’s possible multiple people will finish stage four and keep the episode more interesting.

Only one person, Isaac Caldiero, has ever won the show’s $1 million prize, and he is one of just two people to have finished all four stages of the final obstacle course in Las Vegas (Geoff Britten was the other; both finished the course during season 7 in 2015).

Besides the promo, NBC’s description of the episode explains what will happen:

“For the first time in four years a winner will be crowned on the finale of ‘American Ninja Warrior.’ A select group of competitors move forward in the competition to face stage three which features seven daunting obstacles; three new to the course this year – ‘Battering Ram,’ ‘Curved Iron Maiden’ and ‘Dynamic Pole Grasp.’ The elite few who conquer stage three move on to stage four, a final climb up Mt. Midoriyama, which they must complete in thirty seconds or less. Finalists vie for a $1 million prize and the title of ‘American Ninja Warrior.’ Matt Iseman and Akbar Gbajabiamila host and Zuri Hall reports from the sidelines. TV-PG”

And this quote-unquote spoiler stretches back nearly a month, when Matt Iseman said in an interview, “This is a huge tease, but just for the second time in the show’s history, we crown a winner. This season, someone is taking home the million dollars.”

Will the winner be one of the show’s now-famous regular competitors, such as Drew Drechsel or Mathis “The Kid” Owhadi?

NBC has released video clips of Drew, Daniel Gil, Karsten Williams, Lucas Reale, and Ryan Stratis attempting stage three, though those clips, such as the one above, don’t reveal if the contestant finished the stage or not.

There are 21 contestants who finished stage two, the most to ever have made it to stage three:

Four of those almost didn’t make it: Drew Drechsel and Flip Rodriguez fell during stage 1, and Mathis Owhadi and Karson Voiles didn’t complete stage 2. But they’re all competing on stage three because they used their “Safety Pass.”

That was introduced as a new twist this season: At the end of the courses in each city, the two fastest contestants competed against each other in a vertical climb. The winner, in the qualifying round, won the ability to go directly to the national finals in Las Vegas (the “speed pass”), while the winner during the city finals round won the ability to save themselves if they fell during stage 1 or 2 during the finals (the “safety pass”).

That kind of immunity twist is a nice way to check against the unforgiving nature of the course, but also helps keep the show’s stars on television longer. Otherwise, all four of the contestants who used their safety passes wouldn’t have been part of the finale, except from the sidelines.

Recommended for you: Behind the Scenes of American Ninja Warrior: How its obstacles are designed, tested and built; how the show is filmed; and more