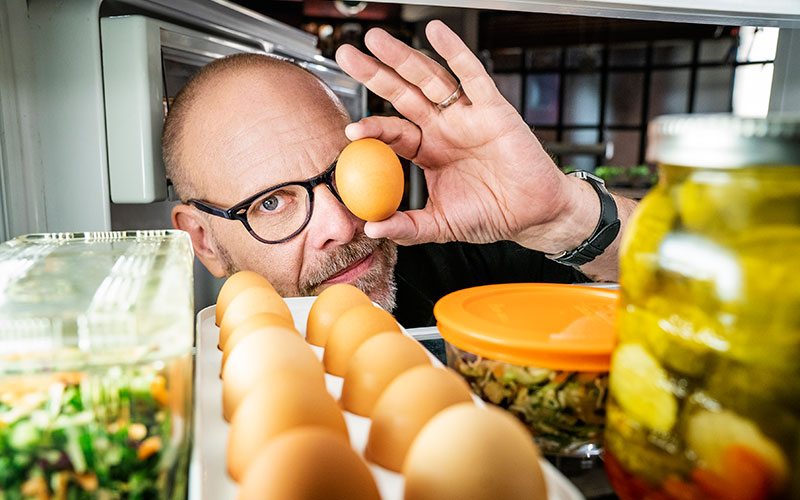 Alton Brown poses with an egg for Good Eats: The Return (Photo by Food Network)

Good Monday morning. In this week’s preview of reality TV shows and documentaries that are premiering this week, we have the return of two early, genre-defining reality shows—though Good Eats and Ghost Hunters couldn’t be any more different.

First up: Alton Brown’s Good Eats, which returns at long last, after seven years off the air. Now it’s technically called Good Eats: The Return (Food Network, Sundays at 10), and that shouldn’t be confused with Good Eats: Reloaded, which aired last year and was essentially repeats of the original series with new content added.

The original series premiered 20 years ago, in 1999, and aired there until 2011, when it moved to Cooking Channel. Alton Brown promises to bring back everything from the original, including the theme song, puppets, science, and cameras inside refrigerators and ovens.

Food Network also has two other series with familiar personalities premiering this week:

Also returning: Ghost Hunters (A&E, Wednesdays at 9). It’s only been off the air for three years, though it was an early paranormal reality series, debuting back in 2004 on Syfy. But only one of its original stars will be on the new season.

On the Syfy series, Grant Wilson and Jason Hawes’ The Atlantic Paranormal Society, or TAPS, investigated allegedly paranormal activity, and found definitive proof of an afterlife and the existence of ghosts. Just kidding! (You’d think with so many of these ghost-hunting, paranormal-sleuthing shows one of them would have found something by now, but no.)

That original team has split up: Jason Hawes has a new show coming to Travel Channel in October, Ghost Nation, on which he’ll be joined by Dave Tango and Steve Gonsalves.

Over 20 episodes, they will, the network says, “investigate hauntings across the country” and try to “help everyday people who are struggling with unexplained supernatural phenomena.”

Their series will be followed by the return of Psychic Kids (A&E, Wednesdays at 10), on which the kids from the 2008 show “will work to empower a new generation of young psychics alongside trained licensed therapists,” according to A&E.

Kingdom of the White Wolf (NatGeo WILD, Sunday, Aug. 25, at 8 p.m.) is a three-hour special, that follows National Geographic Explorer Ronan Donovan, who films his quest to find a wolf pack in the Arctic, where it lives far away from humans.

In documentaries, Jawline (Hulu, Friday) follows a 16-year-old in Tennessee, Austyn Tester, as he live streams his life, using social media to find both celebrity and a way out of his small town life. Watch its trailer here.

The end of last year’s U.S. Open, when Serena Williams was penalized repeatedly by an umpire, is the subject of the first documentary in a new ESPN series, Backstory. The first doc, Serena vs. The Umpire, aired yesterday on ABC, and is now on the ESPN app. It’ll air tonight, too (ESPNEWS, 10 p.m. and ESPN 2, midnight).

American Factory (Netflix, Wednesday, Aug. 21) is about a factory in Ohio opened by a Chinese billionaire, and focuses on how “high-tech China clashes with working-class America,” according to Netflix. This is the first show from Higher Ground Productions, the production company founded by Barack and Michelle Obama, to be on Netflix.

Hitsville: The Making of Motown (Showtime, Saturday, Aug. 24, at 9 p.m.) tells the story of Motown Records, including interviews with its founder Berry Gordy and footage from its vaults. Watch its trailer here.