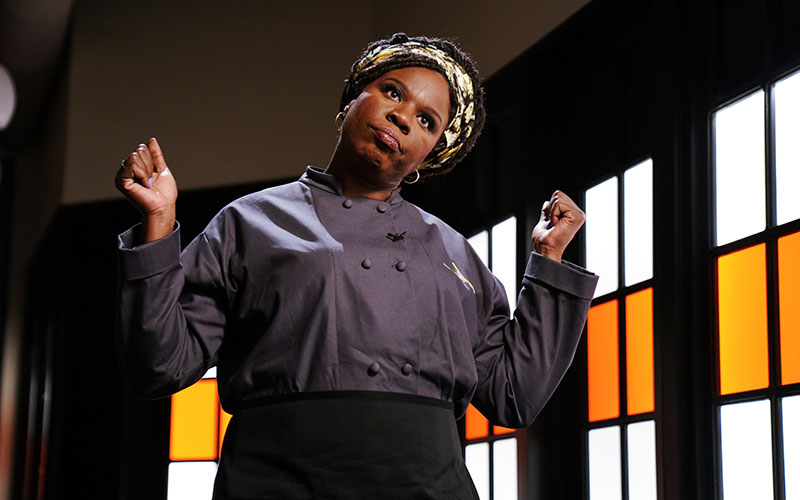 Leslie Jones has left Saturday Night Live, and among the projects she’s involved with now is revival of Supermarket Sweep, the game show that aired during the 1960s (on ABC), and then in the 1990s (on Lifetime) and early 2000s (on PAX). She’ll host the reboot.

Although ABC has been the home for classic game show revivals—most recently, Press Your Luck and Card Sharks—this revival doesn’t yet have a network. Deadline reported that Fremantle has pitched it and now “multiple networks [are] bidding on it,” including “ABC, NBC, Fox and Netflix.”

That kind of interest makes it likely the show will find its way to the air.

David Ruprecht hosted the 1990s version, with announcer Johnny Gilbert. It was filmed in a fake supermarket, and ended with Ruprecht giving the line I can still hear: “Remember, when you’re at a checkout counter and you hear that beep, think of the fun you would have on Supermarket Sweep!”

Leslie Jones was apparently wondering how much fun she could have there, too; Deadline reported that “Jones was a big Supermarket Sweep fan growing up and has been a driver behind the revival of the classic show, created by Al Howard.”

Two seasons of the Lifetime version are on Amazon Prime. The pilot, filmed in 1990 in an actual grocery store, was uploaded to YouTube by game show host Wink Martindale, and starts with a message from David Ruprecht. Watch it here:

One interesting difference with this revival and other recent revivals of classic game shows is that there’s already a competition set in a grocery store on TV: Guy’s Grocery Games, which has been on the air since 2013 and does very well for Food Network. (Last Wednesday, it was the eighth most-popular show on cable, beating Married at First Sight, Property Brothers, and House Hunters in the 18-49 demo.)

Of course, both of those shows are cooking competitions; Supermarket Sweep is a game show set in a grocery store; there’s no cooking involved.

In the 1990s Lifetime version, teams of two answered trivia and/or pricing questions, winning time on their clock. (Teams started with 90 seconds and won 10 seconds for the correct answer.) In the most-fun part, the teams ran around the grocery store, grabbing up to five of each item, looking to buy the most-expensive things. There were also bonus items throughout the store. At the end, all their items were tallied and the team whose groceries and bonuses cost the most won the game.

The winners had 60 seconds to find three items in the grocery store—which is essentially the same as the final round on Guy’s Grocery Games, where contestants hunt for items and earn cash for each one they find.

I loved the Lifetime version, perhaps because a grocery store set was the most-familiar looking set I saw on television, and also there was something exciting and transgressive about running through a grocery store and grabbing only the most-expensive things, like five turkeys.

My memories are tainted a little by an anecdote shared by RuPaul’s Drag Race and Guy’s Grocery Games set designer Scott Storey in my interview with him, when he revealed what the set was really like. Hopefully the new set is more like Guy’s Grocery Games (a set that’s been crafted into a full, working grocery store) or just an actual grocery store.