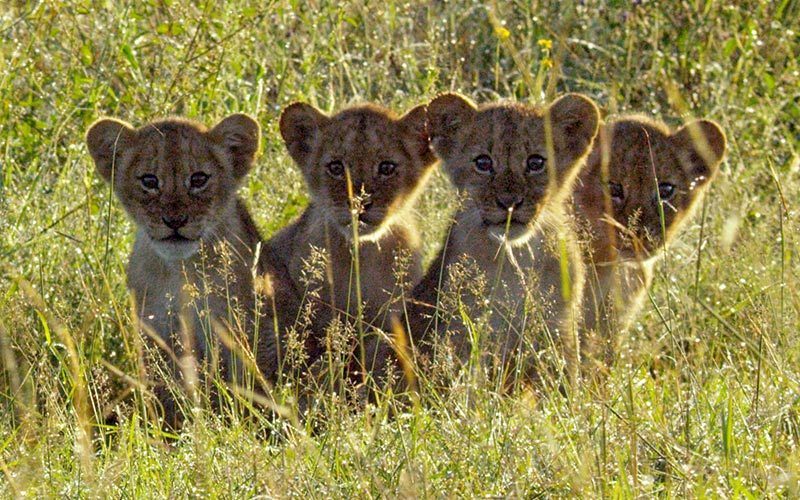 That’s what the director of Serengeti, John Downer, told me when I asked him about producing a natural history documentary series in an era where it feels like there’s a brand-new one every few weeks or months. This year, we’ve had BBC America’s Dynasties, NatGeo’s Hostile Planet, and Netflix’s Our Planet, and those are just the big ones I can remember without Googling.

The first episode of Serengeti—which follows animals over one year in northern Tanzania, region with rich biodiversity—airs tonight simultaneously on Discovery Channel and Animal Planet at 8 p.m. ET/PT; future episodes will air Sundays on Discovery.

“I was less interested,” Downer said, in shows that were “everything slowed down, beautiful, it’s just awesome. But people are doing that.”

“My viewpoint, right from the start 30 years ago, was I wanted to tell the story from inside the animal world,” Downer told me. “And all my energies and technical developments has been about: Can we get inside that world? Can we see it in a different way?”

Those technical developments were on camera in 2017’s Spy in the Wild, which I wrote had “emotionally manipulative robot animals.”

There will be emotional manipulation in Serengeti, which has very heavy-handed, anthropomorphizing narration (Lupita Nyong’o narrates the Discovery Channel version; John Boyega narrates the UK version, which aired earlier this summer on BBC One). There’s also an emotional score by Goldfrapp’s Will Gregory and songs performed by Lola Lennox, who’s Annie Lennox’s daughter.

Downer said Spy in the Wild “resonated with people because they saw the connections between us and other animals,” because the series “explored the emotions of animals, the family connections, friendships—all of that kind of thing that’s normally not touched in documentaries. It doesn’t make big spectacle. You have to get inside that world to even understand what’s going on.”

Downer was able to use some of that same technology on Serengeti, though there were new innovations, too. And it’s not just the big sweeping slow-motion shots that we’ve seen in other shows.

“I had a whole array of different ways that came out of filming that came out of the Spy idea,” Downer told me. “There were all this new stabilized camera systems which were coming out—one of those is drones, but that’s just a little bit of it. More interesting were the other stabilized platforms and ways of filming that meant we could continue that viewpoint while we were on the move.”

“We could have cameras wherever we wanted and keep them stabilized and moving with the animals. We were able to track, at 40 miles per hour, over rough terrain, and stay with the animals when they’re running on a hunt or something,” he said.

The motion and movement is “the big breakthrough in the style of filming,” he said. His goal was to “always try to keep the cameras on the move as much as possible. If the animals were on the move, we should be on the move. It was a much more fluid and energetic style that we developed for the series.”

The narration isn’t the only part that’s dramatic. So, too, is the editing, which includes point-of-view shots and cutaways that make it seem like we’re seeing the world through the animal’s eyes—often because there is a camera right next to it.

Serengeti was also filmed like scripted TV shows. “We had multiple cameras, and we would be filming different angles, we were filming much more as you would a drama,” Downer said.

“We also spent a lot of time making the sure that one of the cameras was capturing expressions, so we could enter the animal’s mind a bit more. What are they thinking? You kind of project your own emotions on it, which helps with the connection.”

The series is produced by Simon Fuller, who created Pop Idol and American Idol, who had an “epiphany moment on the Serengeti plains” while traveling with a guide who shared information about the animals and their lives, according to Downer.

Fuller approached Downer and asked, according to Downer, “Is it possible to tell these stories, and can we tell it in a different way?”

“That’s what I really want to do, so it’s like the perfect connection between the two of us,” Downer added. “There was no idea that we were just do it to give the audience what the want. Because actually the audience doesn’t know what they want until they get it anyway.”

Fuller told TV critics at the TCA press tour that “the project came simply from my love of animals, really, simple as that. So even though I’ve obviously done a lot in entertainment—nothing in natural history and not that much in drama—it was my passion for animals and just observing the world as it stands now and the plight that a lot of these animals are under.”

Downer echoed that sentiment when we talked.

“We both had this belief that, with Serengeti, we could tell the interconnected lives of the families of Africa in a way that makes us connect with them emotionally,” he said.

Serengeti’s director hopes that it will “break down that barrier that says, well, we’re human, we’re above all this. Well, we’re not, you know? We live in cities now; we’re just disconnected now. At one point, we were part of that world. And we wanted to try to bring people back into that world and realize those connections are real there isn’t that much that divides us, except a brain that can justify why we do things.”