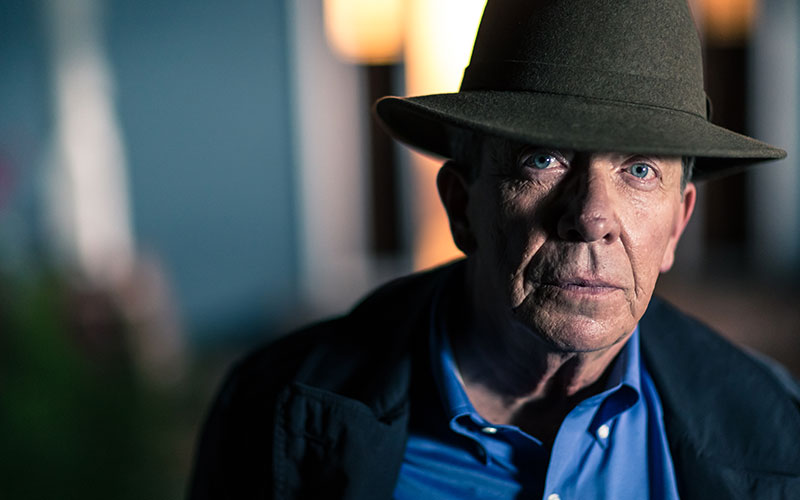 “I’m a storyteller. For thousands of years, Andy, people have gathered around the fire and said, Tell me a story, and if you tell it well, they’ll ask you to tell another. And that’s all I am: I am a raconteur. I tell stories in interesting ways.”

That’s what Homicide Hunter: Lt. Joe Kenda told me about what he does on his Investigation Discovery show, where he’s been telling the stories of murder cases he solved since 2011. Eight seasons have aired so far, but after this 20-episode season nine (ID, Wednesdays at 9), the show is ending forever.

Kenda isn’t leaving ID: In fact, the network is developing a new show for him, though it’s so early in development that he knows nothing about its focus or content. (It’s likely to premiere in fall 2020.)

Why end now? The cases he’s discussed over the years “were very presentable in a storytelling, mystery format, which is what made the show work as well as it did. At this point, I’m running out of those, and I don’t have enough remaining to sustain a season 10,” he told me.

“What I have remaining are either too simple or simply too disgusting—involving children and babies, and I won’t do those and neither will ID,” he said. (The book he published last year, I Will Find You: Solving Killer Cases from My Life Fighting Crime, tells some of those stories, which Kenda writes in the book “are simply too heinous and distressing for a general viewing audience.”)

“I called Discovery two months ago and I told them, When season nine is over, I’m done, and I will either go home—and thank you very much for the money—or if there’s something else you’d like me to do for you, I’d consider it,” he told me.

There’s a good reason ID would want to stay in business with Lt. Joe Kenda: His series was the second-most popular show on ID last year, with an average of 1.75 million viewers per episode.

He’s so popular that his catchphrase, “my my my…”, has inspired bootleg merch, and he’s so famous that he’s recognized “every place I go: every airport, every restaurant, even a city street, even here in New York,” he said, where “I’ve had stop for selfies for a couple of people.”

Those who meet him on the streets will discover that, as Kenda said, “I am who I am. You meet me in person, I’m the same guy you see on television.”

That fame is a big change. “Having this notoriety that this show has provided, the dramatic difference is this: when I worked, everybody was either afraid of me, they hated me, or both. And now, everybody wants to be my friend,” he said. “It’s very weird.”

How Homicide Hunter episodes are produced

The cases Lt. Joe Kenda investigated as a detective in the Colorado Springs Police Department—and that were solved and adjudicated, with all appeals exhausted—have become public record in Colorado.

So new seasons start with producers actually buying the case files, which anyone can do.

The production company “buys 60 of them at a time, and they go through those and select some that they like the mystery level, the like the players involved, the like the number of suspects involved,” Kenda said.

“Then I sit down with the producers and decide how to cut it up and remove parts of it, because murder cases are immensely complicated. You cannot present a murder case on Homicide Hunter; if you did, the show would last for six weeks and nobody would watch it.”

That leaves the production with only “the highlights” of each case, so Kenda can tell the story “without getting involved in the minuscule details and the names of everybody and all the people we talked to and all the things we did.”

Kenda told me that he remembers the cases—”it’s very intense work. You don’t forget any of the facts. You just don’t”—but before filming, he does review the case. “I go back in there and look at the file to make sure I don’t get them mixed up with another case, because there’s a lot of similarities with murders,” he said.

A disclaimer at the top of the episode explains that “certain images and details may have been altered.” I asked Kenda what specifically is changed, and who makes that decision. Details that are changed, he said, are only ignored or changed to simplify the storytelling, though it doesn’t change the facts of the case.

As to names, he said “we change any name of any real person that didn’t get arrested and convicted of something. Because if we don’t do that, we’re casting aspersions on their character, and that’s a potential lawsuit,” he said. “We can’t say this guy was a suspect in this crime if he didn’t get convicted for it, because you’re telling the general public this guy is a potential murderer, and now he turns out to be your kid’s third-grade teacher? That’s not good.”

The reenactments aren’t filmed until after Kenda completes filming, which may include producers asking him questions or prompting him to talk about certain aspects of the case. “It’s not a monologue; they’ll give me guidance,” he said. “They give me the headline, and I’ll fill in the details.”

After that, the production will “make a transcript of what I talk about, word for word, like they do in a court, and they send that to the director of reenactments, in Knoxville, Tenn., and he uses that transcript as a guide for his scriptwriters.”

“They reenact exactly what I discuss, and that’s why it fits together so well,” he added.

Kenda sees the actor who plays him, Carl Marino, once or twice a year. (You can see him in the preview above, which is for the season-nine premiere, “Cynthia,” about a woman, Cynthia McLuen, who was abducted and murdered in 1982.)

Kenda and Marino don’t have regular contact, but at the beginning of the series, they did talk a lot because “he wanted to get some kind of read into my personality,” Kenda said.

“The fans enjoy him, and he’s a lot better looking than I ever was, and people like that part,” Kenda told me.

I said, “It’s good to have an attractive person play you on television,” and he replied, “Yeah, you want to have a handsome guy play you on TV, it’s always important to have that. Not somebody who’s not pleasant-looking.”

Once the reenactments are filmed, Kenda watches them to ensure they’re accurate. “I review those to make certain that there’s not any mistakes or not any Hollywood add-ons—no gunfire, car chases, that sort of thing,” he said. But I’ve never had that happen. They’ve always been very accurate.”

Watching those reenactments, he said, “feels like you’re doing it all over again. It does really feel that way. That’s part of the advantage to me: it’s therapy for me to get involved in this, because I feel better now than I did nine years ago,” he said. “It’s released a lot of emotions that I’ve never released before.”

“If money was a motive, I wouldn’t have been a policeman. I don’t care about money. If I had it, I spend it, if I don’t have it, I don’t spend it. Simple policy. It’s not a big deal; feeling good about myself is a big deal, and I want to have that feeling again, and I’m getting it back as a result of having done this.”

As to those viewers who’ve watched him tell stories and process those emotions, Kenda told me, “I am hopeful that they learn something about how to live their lives and things to avoid.”

He cited an example: A letter he received from “a young woman on the west coast who said that she was watching one of my shows and I was describing the abusive male personality and how it progresses from jealousy to verbal complaint to physical demand to homicide. In the letter, she said, I’ve been watching that show and I realized that the person you’re talking about was sitting next to me. And I left him, and I want you to know that you saved my life. That was very nice.”

“A year later, I got another one,” Kenda added. “Two lives saved from a TV show? I’ll take that any day of the week.”