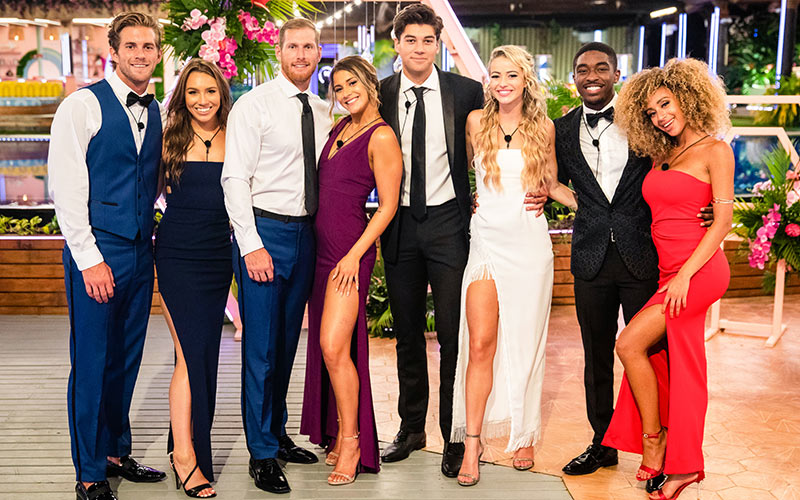 I secretly wished Love Island would end its (surprisingly wonderful) first season on CBS with the narrator’s voice becoming audible to the final couples, like Christof at the end of The Truman Show: “I know you better than you know yourself.”

Because he’s as much a part of this journey as they are. But even without that, I enjoyed the actual finale, though not as thoroughly as I enjoyed this entire first season of the CBS version of the UK hit.

Matthew Hoffman’s narration—still the highlight of Love Island for me—was strong at the start of the episode (“What happens in the villa, stays in the villa—and our back-up drives, forever,” he said after a PG-montage of sexual activity).

Alas, it faded at the end, as the show really dragged out its final minutes of its finale, when Arielle Vandenberg emerged from wherever she sits and waits to host the show that she’s apparently the host of. This unnecessary filler and cliffhanger mirrored the first episode, minus the narrator’s acknowledgement of it.

Arielle showed up to announce which of the final four couples had won viewers’ hearts. Weirdly, this was described as voting for “the winning couple” (not “favorite couple”?), who Arielle explained “will have the chance at winning the $100,000 prize.”

Why was it “a chance”? The final two each selected an envelope; one had the prize, one didn’t. The person who selected it got to decide whether or not to share it. This felt oddly tacked on and unnecessary; just give the kids some cash and be done with it.

To use the narrator’s perfect description of them, the “talking wedding-cake toppers, Zac and Elizabeth” won viewers’ vote. And of course they did: they’re young, cute, and have been together since the very start.

Weston and Emily came in fourth place, i.e. last, perhaps because their relationship is so new, or perhaps because of Weston. Ray and Caro came in third, which was a little surprising, especially since they lost to Dylan and Alexandra, the couple who registered the least to me.

Elizabeth decided to share the $100,000, because of course she did. Zac’s mom is already trying to get them married, though at least Elizabeth’s mom was like HOLD ON WOMAN. After all, they’ve known each other for less time than it takes to fly to Fiji and back (I’m exaggerating only slightly).

During the family visits on Tuesday night, Zac’s mom told him, “We never expected you to connect with someone as great you did.” Zac said, “I didn’t either.”

Neither did I. Yet that was one of Love Island’s many surprises: these relationships seemed genuine, neither performative for cameras nor the product of any kind of manipulative producing or editing. I haven’t watched every single episode, especially over the past week or two, but I’m fascinated at how they really seem to have strong connections—but also are clearly aware that their relationships are new and were formed in a weird environment.

Is this the healthiest network dating reality show ever? The producers didn’t even try to screw with people, or exploit them, or let some crazed ex come back just to create a dramatic scene.

Although there were recouplings and votes, and some flashes of drama, the show was mostly just conversations: long stretches of talking. On a network reality show!

But that’s what I loved about Love Island (I know, I know, I need to watch the UK version): While the show has a spectacular location and a robust budget for evocative pop music, it really thrives on the smallest of details: a throwaway laugh line, the relationships between young, hot, blank people.

(If you want to know more about how producers chose the music, read Marisa Roffman’s interview with executive producer Simon Thomas.)

The final eight people all wrote “declarations of love” for their partners, which were like wedding vows without the wedding, and which, on any other show, would have me literally screaming at the television. But even with the treacly soundtrack—John Legend’s “All of Me”, Ellie Goulding’s cover of “Your Song”—it was somehow still just nice to hear them say kind and loving things about each other, these people they met on a summer reality show.

I’m not sure I know anything about any of the cast members besides the connections they formed, and that’s okay: it keeps it small, sweet, low stakes, yet still buoyant fun.

It’s what Big Brother always promises—light, sexy summer entertainment—but never delivers, and not just because it’s frequently a fount of terrible behavior that CBS is just fine with.

Love Island was “a gamble” but one that turned out to be “absolutely the right call for CBS,” as Vulture’s Joe Adalian explains in this story.

My dream: CBS hands Big Brother over to the producers of Love Island (not just ITV Entertainment, but I mean literally the people responsible for running the show this season), and also gives them a similarly robust budget and the trust to do the show right, like it was once done in the UK.

I know this won’t happen, in part because CBS has no incentive to change Big Brother, which gets double the ratings of Love Island despite being so unbearably shitty and cynical.

But I am content with CBS acknowledging both Love Island’s quality and its value to the network by bringing it back next summer. It’s nice to finally have such a high-quality, highly entertaining CBS summer reality show that it’s easy to fall in love with—and, apparently, fall in love on.