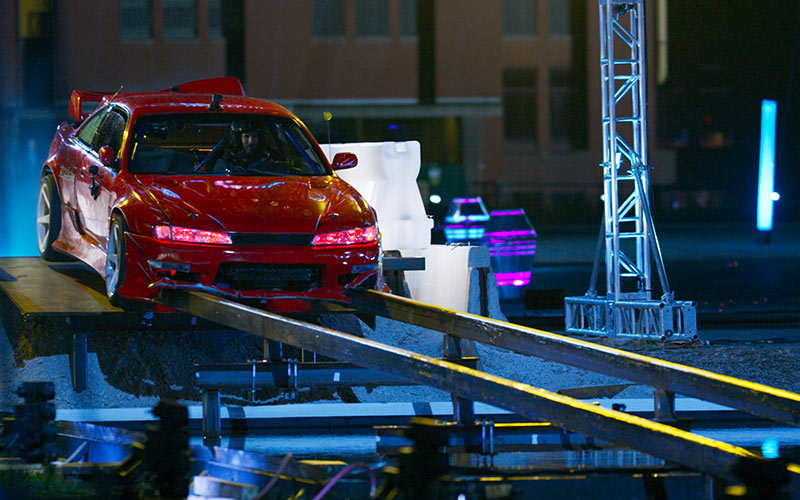 Netflix’s first competition reality show was Ultimate Beastmaster, a competition series that was essentially a version of American Ninja Warrior, except the contestants came from multiple countries and the obstacle course was set in the innards of a beast-thing, with blood-red water.

Its latest competition series, Hyperdrive, is also comparable to American Ninja Warrior: it’s an obstacle course, with contestants trying to get through the fastest so they can move on to future rounds. But instead of fit bodies flying through the air, this course has custom-built cars that fly through the course. It’s Fast & Furious: the reality show, and it’s thrilling.

Netflix calls this “the biggest, baddest automotive obstacle course ever built,” and it’s hard to dispute that.

Drivers drift and slam their cars’ back ends into targets; they speed through straightaways at 90+ miles per hour or creep across a bridge that see-saws underneath them; they drive across a field of water, unable to see the flooded road and following just a dim series of lights marking a safe path; they speed through a narrowing tunnel toward an end that has just six inches of clearance on each side.

The goal is to get through the course as fast as possible. Time penalties are added if drivers screw up, such as by missing a target, and some obstacles have a time limit.

As they navigate these smartly designed obstacles, dramatic lighting across the course shifts and changes. Markers turn red if a car hits them. When cars make contact, intentionally, with targets that resemble reflective button road signs, the reflectors fall out, blinking and bouncing around the pavement. Spotlights beaming across the track whip up into the air as cars fly by. It’s beautiful and an electric rush.

Hyperdrive was filmed last summer at Eastman Business Park in Rochester, New York, a former Kodak manufacturing plant that’s now home to other businesses. It’s expansive and industrial, so there’s a lot of room for cars to zip between buildings and across parking lots.

All of this is filmed creatively, with multiple camera angles capturing all the action. Inside the car, we can see the driver and look over their shoulders; cameras attached to the outside of the car show us the track ahead and behind, and also the sides. Overhead cameras track the cars as they fly through the course, as do cameras along the course at ground level.

The editing cuts all this together to make it as dramatic as possible, and it’s like watching a car chase more than a reality television competition. Each episode bleeds into the next, so it’s easy to just keep watching.

The four commentators are a bit of weak spot, or more like a blank spot; they have neither the energy nor the personality of Matt Iseman and Akbar Gbajabiamila, and are easily overshadowed by the action. That’s better than becoming the focus, though, and their explanations of what’s happening can be useful.

The course is ultimately the star for me, but of course, these cars don’t drive themselves, and the contestants—who’ve brought their own cars from around the world—are a wildly diverse group who make it clear that there are more than just young men who love to insanely modify cars to do insane things.

They’re introduced with bio packages that usually focus on their start in street racing, and their passion for it. Each of them has brought someone to help out, a person who talks to them through a headset, watching on monitors to see, for example, if a target was missed.

While new obstacles show up and others get modified as the competition proceeds, I wondered early on if there was enough variety in the course to make 10 episodes interesting.

I think there is: The range of cars and contestants means there are completely different approaches to the course and its obstacles.

I was ultimately surprised me by the range of what happens on the course. Drivers show off their abilities and also damage or accidentally break their cars, while others make spectacular moves but also screw up in consequential ways. So many things can happen—and usually do.

All of this makes Hyperdrive just fun to watch, both for the speed and for the technical perfection of this formidable yet fucking awesome course.