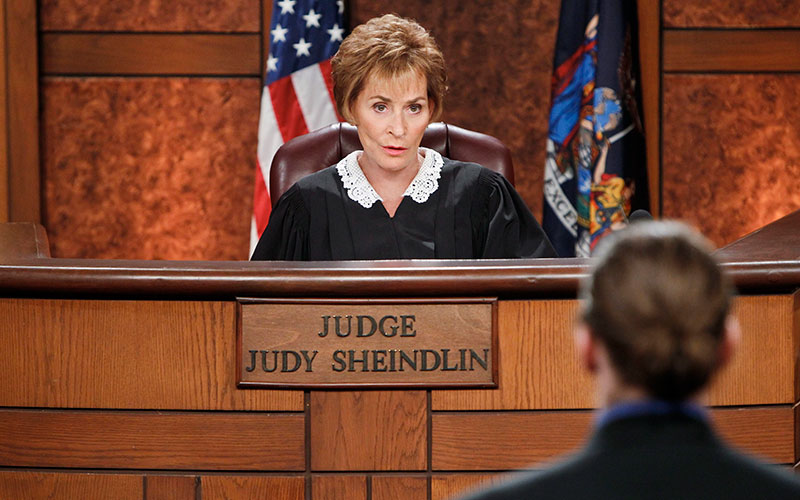 Judith Sheindlin, aka Judge Judy, during a 2014 episode of her syndicated courtroom reality show. (Photo by Sonja Flemming/CBS)

Happy Friday! For your long, Labor Day weekend—which hopefully will not be affected by Hurricane Dorian—I’ve gathered together 13 terrific stories about reality television and its personalities and producers.

When I read something I love, I first share it in my next weekly newsletter. (You should subscribe now if you’re not already on this list; it’s free, and of course, you can unsubscribe any time.)

Also, since it’s the end of the month, thanks so much to Aaron Barnhart and Kia B. for their support via Patreon. If you’d like to support my work and help keep it free for everyone, join us—and I’ll send you some reality blurred stickers.

Okay, on with the short and long reads. Enjoy! Happy weekend, and please stay safe, fellow Floridians, those in the Caribbean, and anyone else in this storm’s path.

Yvonne Villarreal opens her story about the return of The Hills at Les Deux with Spencer Pratt is hanging out, with his child. The reality just gets weirder, like when Vanderpump Rules films at The Hills‘ premiere. A great story about how the MTV show has “become a relic of the culture it helped ignite.” (L.A. Times)

Anthony Bourdain has been gone for more than a year, but Drew Magary’s profile of him from last December is still relevant, arguing “that Bourdain’s work cannot end with him.” (GQ)

This Old House is 40 years old—and gets higher ratings than any show on HGTV. That’s one of the many things I learned in this story that looks at the venerable home renovation series. (New York Times)

It’s been 20 years since Who Wants to be a Millionaire? premiered and surprised everyone with its huge ratings—including its producer, Michael Davies, who had such a low budget for the first season he didn’t even pay himself. (CNN)

Judge Judy has been on the air for almost than a quarter of a century, and has been the highest-rated syndicated show since 1998. For more than half its life, it was even was higher-rated than Oprah Winfrey’s show was. Those facts and more in this profile of Judge Judy and her courtroom reality show. (New York Times Magazine)

After that Judge Judy profile was published, there was this essay, in which Sarah Jaffe points out that the New York Times Magazine “devoted several paragraphs to her new hairstyle (a clip-on ponytail) but none to the allegations that dogged her throughout her career: that she is both racist and profoundly contemptuous of the poor,” and that she “creates a world in which prejudice has no power and people are rewarded or punished simply for their actions, not for who they are.” (Slate)

I loved Bravo’s new version of Project Runway, and its new judge Elaine Welteroth contributed a lot to making it so terrific. I went back and read this 2017 NYT Magazine profile of her, which explores how she advanced quickly in the magazine world, and I also appreciated reading this new-ish Q&A with her, in which she talks about the show and her other work (The Cut).

New Project Runway host Karlie Kloss’ brother- and sister-in-law are Ivanka Trump and Jared Kushner, and she’s annoyed, too: “It’s been hard. But I choose to focus on the values that I share with my husband, and those are the same liberal values that I was raised with and that have guided me throughout my life.” (Vulture)

This piece on Luke P.’s return to The Bachelorette explores how that happened with the help of producers, and how they’re reinforcing some dangerous ideas. (Flare)

This Hollywood Reporter story about food reality TV has some fun facts, including:

There have been 36 songs released by Real Housewives cast members, who are, you know, mostly not actual singers. Dave Quinn compiled and ranked them all. Spoiler alert: “Money Can’t Buy You Class” is in the top five, though not number one. (People)

Have you come across—or written!—an in-depth story about reality TV? E-mail me a link!