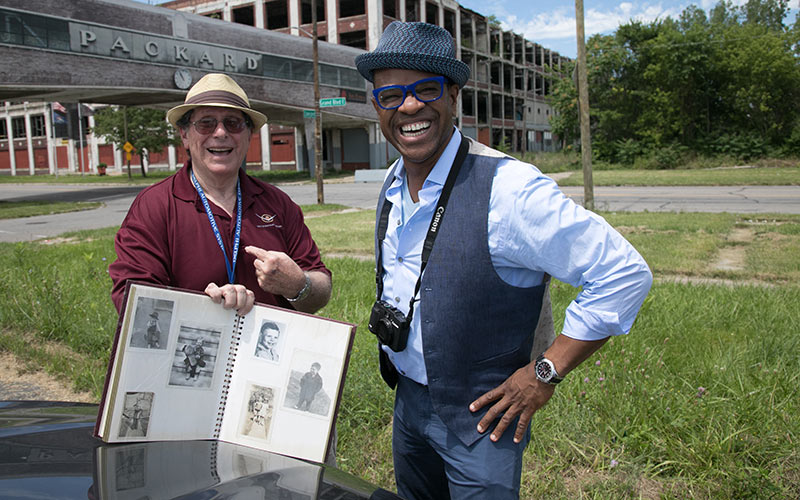 A sixth grader in Immokalee, Florida, looks at a table covered in photos that she and other students brought to school. “These pictures remind me,” she says, “of how whenever we were little, we would go through these pictures together, and there would be, like, a journey.”

That’s exactly what the show she’s being filmed for, Family Pictures USA (PBS, Monday at 9, and Tuesday at 8), does in its three episodes: It weaves a narrative from people’s photos, sometimes using them to illustrate history, and more often diving into them to explore the connections between people and places.

It’s a fascinating show: Watching tomorrow night’s episode about Southwest Florida, where I grew up, I learned more about the person who my high school and county were both named after, Barron Collier, than I did in four years of actual high school. (Collier was a developer who did things like draining the Everglades and building a road from Naples to Miami, cutting off Florida Seminole Indians’ waterways and access to their land.)

Family Pictures USA began as a sort of Antiques Roadshow for family photos: at events set up by the production, people in each of the three regions were invited to bring old family photos and have them scanned. They were interviewed on camera, and also received a free DVD of those scanned photos to take home.

The series had its genesis in a project that began a decade ago. Thomas Allen Harris, a photographer, filmmaker, and artist, created the Digital Diaspora Family Reunion, a project that toured the country, helping people make sense of their photos.

“People were stuck with boxes and books of images,” Harris told TV critics at the Television Critics Association’s press tour in late July. “They didn’t know how to begin to digitize them. And I said, ‘Well, why don’t you pick 10 to 15 to tell a story. We’ll digitize them and tell that story.'”

“We wanted to really lead with the story, but also with the image,” Harris told me later, when I interviewed him. “Most of these images have never been seen by the public.”

Harris estimated that 85 percent of the photos in the series came directly from the photo-sharing events.

But finding these stories required “a lot of research,” he said, noting that they the production team members “hunt for stories and people. … We go and hang out, and then we allow for serendipity.”

“We interviewed over a hundred people in each of these different locations,” he said, and after that, “we were constantly asking people to search out other photographs.”

The photos lead to connections, sometimes even between family members: “They’ve never had an in depth conversation about a particular part of their history or about the album. They had the find out the story of these images,” Harris told me.

Collecting those stories into coherent episodes required a lot of post-production work. “The process of editing was the most challenging,” he said. “These stories are connected, but how do we do it in a way that seamless, and where each family story builds upon the next—even though they’re not related and they might not know each other?

One of the many thing I found interesting about the show is how rare photos are of our relatives’ everyday lives, especially when compared to the abundance of photos we take today.

“All of a sudden, everyone’s a photographer—instantly, in the last 10 years, everybody is both photographer and star, on Instagram or whatever,” Harris said when I asked if this kind of show would be necessary in another 30 years.

He pointed out that, while “we’re taking more images, they’re also more disposable. The key is that we don’t curate them.” He suggests that people select and print one or two images every month, or maybe even just every six months or year. “At the end of a few years, you have images that mean something.”

“Images that mean something” might be a good description of some of Thomas Allen Harris’ previous work, which includes the documentary Through a Lens Darkly: Black Photographers and the Emergence of a People was, as PBS said, “The first documentary to explore the role of photography in shaping the identity, aspirations, and social emergence of African Americans from slavery to the present.”

Harris hopes the stories told in Family Pictures USA can help Americans get out of our common mindset. “The grand narrative of this country is us versus them,” he said. “It’s everywhere. How do we allow for another narrative that might be talking about commonality?”

“In mainstream media, it’s so full of stereotypes and shorthands that rely on older histories, dominant histories, and so this is opening things up in a way that’s not threatening: I’m right and you’re wrong. This is your life and this is my life.“

On Family Pictures USA, Harris said, “We look for the commonalities. So we tried to bring people together across notions of family.”

“It was a great joy to discover the stories in the family albums,” he added, “and to be take that energy of discovery—both my own discovery but also the people discovering the significance of the family albums—and make that into something special.”