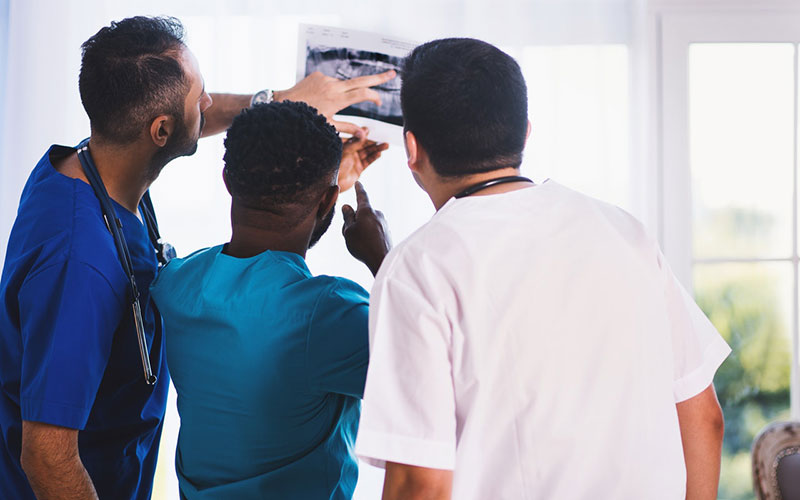 A stock photo of doctors looking at an X-ray. Chasing the Cure will have real doctors, not stock photos.

Chasing the Cure (TNT and TBS, Thursdays at 9) is a new weekly series hosted by Ann Curry that tries to “help people suffering from undiagnosed, misdiagnosed or uncured medical mysteries.” They’ll share their stories and interact with a panel of doctors and viewers, and try to find a cure.

But how exactly does a live TV show do that? How does it do that ethically and responsibly, without encouraging over someone’s medical help to a Google search or someone on Twitter? How will the show be cast? And why is it even live? I interviewed Chasing the Cure’s executive producer and showrunner, Kim Bondy about all of these questions and more.

We started with why the show is live, and why that matters. Bondy said it’s live for “the social interaction, the idea that communities of people can interact with each other to help with the case. If the show had been taped, it wouldn’t have that same level of vibrancy, because the doctors will also be tapping into that community.”

People with mysterious medical conditions have been uploading case files to the show’s web site, and people can browse those files and offer help.

But this isn’t Wikipedia, where anyone can add and edit. Bondy repeatedly referred to the people who will come on the show as “patients” (not, say, “cast members” or “guests”), and said that any information submitted by patients “goes through a very rigorous process of vetting.”

The current “featured case files” include a 51-year-old who has “difficulty walking and speaking”; Mike, who has “severe painful abdominal bloating after most every meal—so big [it] looks like I’m pregnant”; and a person who has been in a coma twice and has both epilepsy and rosacea, yet has been diagnosed with having eczema.

The cases that are “a great story that really resonates, that might resonate with our audience” get attention from the show’s producers, Bondy said. “We go out and we will do a story on them, and you get to know them through that storytelling. Then we invite them on live.”

But there will be a lot of advance planning. “You’ve got to plan it all out, because you don’t know what you’re going to get, especially in the beginning,” Bondy said.

Casting hasn’t been done by typical reality show casting teams. “Even our patient procurement team: many of them have medical experience,” she said. “They know the names of a lot of these ailments, diseases, treatments are. At every step of the way, there is another layer, a filter before it goes out. Because what we don’t want to do is be in the position of giving misinformation.”

Bondy was very clear that the production will be treating people on Chasing the Cure very carefully.

“They’re not celebrities. They’re not reality stars at all. We’re meeting people where they are,” she said. “We want to make sure that there’s a level of caring concern around them the whole time that they are with us. We don’t want to rush conversations or have it be so loose that we don’t get to someone.”

“Everything’s really up to them. They share up to the level of which they want to share. We can’t access anything without their consent; not at all. We have a staff psychologist who works with us, we have a medical ethicist on board—obviously legal review, which is very important. And journalists like myself and Ann Curry, and many others, who are used to dealing with sensitive information,” she added.

If a test result is shared with the patient live on the air, they’ll know that it’s coming, and have agreed to learn about the test live. “Only with their permission,” Bondy said. She added that the production and its host, Ann Curry, are all focused on being “patient first.”

When patients do share information, and viewers start weighing in—either because they have something similar, or because they have an idea about how to help—Bondy said that feedback will be evaluated first. The show just won’t share random advice.

“We have to have a filter in place, and that’s why we have many steps along the way. The person who will staff the crowd-care center is a doctor” who can filter out things that are “not even a remote possibility,” Bondy told me.

She also said there are “team of doctors on set behind the scenes, so that at every step of the way, it goes through several sets of eyes.”

The show itself won’t be directly providing medical care. “We have partners, people want to help, who’ve stepped up—partner hospitals or whatever,” Bondy said. However, she added, “most of our patients have health care and so what they might be looking for is just another set of eyes, because their health insurance will follow them through. But we’re working with hospitals that maybe are doing something innovative and they’re like, We’ll be happy to look at that case with you.”

Bondy hopes that Chasing the Cure offers the people who do come on, or do share their case files online, some hope: “Can you imagine if you’ve seen dozens and dozens of specialists and you still don’t have the answer?”