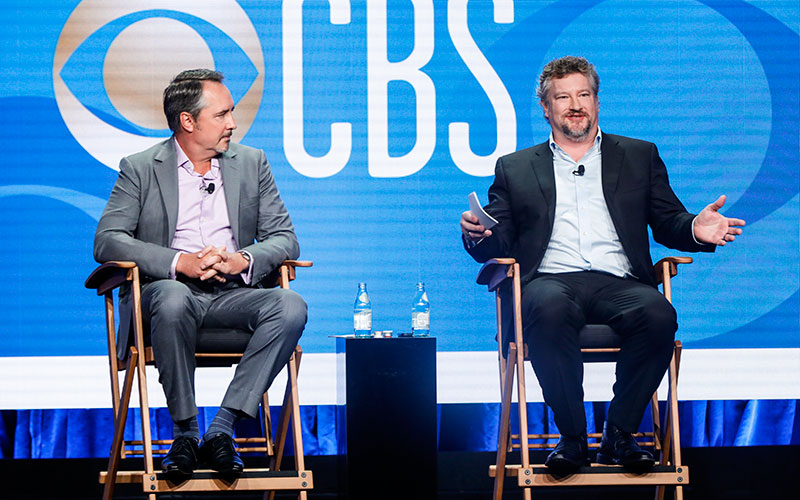 CBS investigated, reprimanded, and trained a producer who asked Big Brother 21 player Kemi Fakunle to speak and act in stereotypical ways, and also trained all of Big Brother’s producers, according to CBS Entertainment’s executives.

CBS Entertainment president Kelly Kahl and VP Thom Sherman were responding to questions I asked about diversity and inclusion on Survivor and Big Brother during their Television Critics Association’s summer press tour press conference this morning.

I specifically asked if it was acceptable for them that their two top reality TV shows allow racist behavior and perpetuate stereotypes. Kahl eventually promised to “take a look at” Big Brother after this season ends, but did not address Survivor specifically.

I began by quoting from Julia Carter’s essay, which among other things, pointed out that players used racial slurs starting on the first day of Survivor.

An important note: I regret and feel terrible that I did not specifically name Julia in my question. Julia, I’m very sorry. I regret that in part because I am so very appreciative of Julia’s writing about this. It’s important that a cast member is being so honest, open, and unequivocal about her experience and the problems that Survivor (and CBS reality shows) are facing. It’s so rare that we hear public, on-the-record criticism from the inside, whether it’s from cast members (who are under contract and may want to return one day) or the entertainment press who are granted regular access to producers.

Here is the full exchange:

Andy Dehnart: “Just to return to diversity and inclusion: I think that’s one place where CBS has often been strong, in its reality show casting. But I just wanted to quote something that only black female cast member on Survivor wrote after her experience this year.

She said, quote: ‘There is a significant difference between diversity and inclusion. Casting a few Black faces each season simply isn’t enough. Include them in the story. Stop giving them stereotypical edits that perpetuate the same stereotypes that many of us come on the show to combat.’ End quote.

Yet, this summer, Big Brother producers have asked their only black female cast member to act and talk in a more stereotypical way. They’ve edited out hateful and violent things that white men have said about her, and edited her into someone who seems rather crazy.

So I guess my question is: Is it acceptable to you that your two top reality shows allow this behavior and continue to perpetuate stereotypes through the choices the producers are making in editing and in production?”

Thom Sherman: “Well, in the case of Big Brother, a producer—we learned that a producer, in an attempt to get a soundbite from one of the houseguests overstepped. That producer was reprimanded, received unconscious bias training—as did all the producers on the show—and we don’t believe that an incident like that will happen again.”

Andy Dehnart: “What about on Survivor? Again, this is a pattern that’s happened over 10 years, and these are just some specific this-summer examples. So that’s a great first step, but how do you plan to address it across all of your reality TV and with all of your producers?”

Kelly Kahl: “Well, I think, all of our shows, the producers receive unconscious bias training. In terms of how people are represented, I think the vast majority of people who come off the shows are very happy with way that they’re represented. Most people who’ve been on those shows have a—speak very fondly of their experience.

So, I’m not sure we can always edit the show—in the cases of all these shows, there are thousands of hours that are condensed down to 42 minutes per episode, and we’re simply not able to show every single thing that happens on the show. We strive—and the producers strive—to show a good representation of what happens, and I think they do a good job of that. Like I said, I think most participants on these shows come off and come away having a very, very good experience.”

I would have liked to follow up on so much of that—starting with how “most of the people” on CBS reality TV are white, so of course they aren’t complaining about this particular problem—but TCA decorum provides for asking just one follow-up, and then letting other critics and reporters ask questions.

Thankfully, NPR TV critic Eric Deggans—whose 2012 book is subtitled, “How the Media Wields Dangerous Words to Divide a Nation” and has an entire chapter about reality TV—asked a follow-up:

We are now telling you that you have a problem with your reality shows. Why can’t you take that criticism and do some substantive looking at it rather than trying to spin it?”

Kelly Kahl: “Well, I would say, on Big Brother, half of our cast this year is diverse, and the last three winners of Big Brother have been people of color.”

I think he meant the past three of four winners (CBB2, BB20, and BB19). Here are the past six winners of Big Brother:

Back to the press conference, and Eric’s follow-up question, which address Big Brother 21’s “Camp Comeback.”

Eric Deggans: “This year, you had a situation where your three people of color were stuck in some sort of camp situation where they had to live in lesser circumstances than the other housesguest.

The people of color have been systematically eliminated from the show. People are talking about the racism on Big Brother, and you’re telling us one producer got some kind of training.”

Kelly Kahl: “First, we said all of the producers have received training. Second of all, I would say that (pauses) we have heard things on the show that we are not comfortable with, that we have not enjoyed hearing. And we will absolutely—after the season is over—take a look at the show.

We, every season, try to go back and look and ask if there’s anything we can do better next year. And that is something we will do after this season is over.”