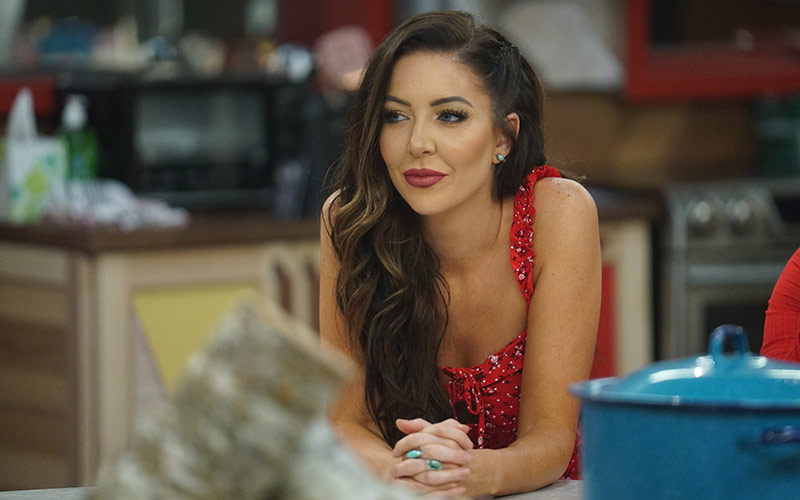 Earlier this summer, a Big Brother producer was reprimanded and given training after telling Kemi to speak and behave in a more stereotypical manner during her Diary Room interviews. The problem there, of course, was the racism.

Coaching contestants, however, is nothing new for Big Brother—or for many reality shows. And on BB21’s live feeds this weekend, houseguests have complained about producers in the Diary Room telling them what to say.

Over the years, we’ve learned about what happens behind closed doors in the Diary Room, where there are no live feed cameras, so all we see are the edited versions on the CBS episodes.

The houseguests tend to shout at the camera during their Diary Room interviews, and that’s because they were being coached to do so: Big Brother winner Derrick Levasseur told Buzzfeed, “They tell you to. Whenever you talk normally, they ask for more energy. You do what you’re told.”

That’s one way that makes those interviews sound less-than-real, which I wrote about three years ago: “The problem with Big Brother’s disingenuous Diary Room interviews.”

Big Brother 4 winner Jun Song explained more about the Diary Room, revealing that, during her season, a producer “only puts words in your mouth when you have to explain instructions for a competition, or if they need you to repeat something more clearly, but that’s about it.” She also said that lines might seem “rehearsed” because something “wasn’t a perfect thought” and the producer “may ask the HG to repeat what they said in an exact way.”

Honestly, in the past few years, the interviews have gotten better: there seems to be less shouting, and there have been moments that are quite authentic, not rehearsed. Of course, there’s still plenty of phony-sounding lines that come out of the contestants’ mouths when they’re in the Diary Room. But there’s even more coming out of the Diary Room this season.

“Stop fucking telling me what to say,” Holly told producers

Kemi’s example showed how the producers go beyond just getting houseguests to clarify something: they’re also trying to shape characters and narratives.

They’re still doing that, according to several houseguests. Here’s a report from the live feeds on Friday, during which three houseguests said they’re fed lines and told to say things that they don’t actually want to say:

Why would someone do that? There’s a considerable power imbalance, with contestants playing a game for $500,000 after having signed Big Brother’s contract, which gives producers all the power.

Today, Holly pushed back against that. After she tried to make a joke in her Diary Room session, she was told it was “too nice.”

The joke was about this season’s visit from Zingbot, a crew member who dresses in a ridiculous robot costume and delivers “zings” about their behavior. That occurred yesterday, and will be on Big Brother later this week.

Hamsterwatch detailed the zings, which seemed really weak and nonspecific: Jackson was called “a pompous douchebag,” and Holly was referred to as “an old buzzard.”

Jessica was zinged for being a “snoozefest,” Holly told, “I tried to make a joke yesterday about, like, Hey, ‘snoozefest’ sounds fun. I’ll grab my jammies and be right over. Like, where’s my invite? But apparently that was too nice.”

Christie responded, “Yeah, that’s so annoying to me. I hate that.” She started to say, “That was like, me, too, I…” and she says something that sounds to me like “wouldn’t say.” (It’s unclear because of cross-talk.) Watch:

I can’t fully hear Christie because Holly (and Christie?) was reprimanded by the Big Brother’s producers, who played one of the pre-recorded messages that have executive producer Don Wollman issuing various commands.

“You are not allowed to talk about your Diary Room sessions with other houseguests,” it said.

Holly basically ignored the reprimand for a moment, and then said, “Come on! Stop fucking telling me what to say. If you would just let me say what I want to say in there, I wouldn’t bitch about it out here.”

As always with Big Brother, the live feeds give fascinating insight into the way a show is produced.

While we’re not seeing actual interviews take place, I can say with confidence from my years of reporting on reality TV that Big Brother is not some aberration here: this is quite common. Reality show interviews are often about getting a cast member to say what a producer needs them to say in order to tell a story or fill in the blanks. (Here’s a story producer talking about how that process works.)

That can be innocuous or just helpful; it can also be fiction—especially when producers don’t get what they need. That’s when editors may turn to a frankenbite: creating a soundbite by taking words and phrases from other lines and creating something completely new.

Is that more or less real than just telling someone what to say?

I am grateful to Holly, Kemi, and others for speaking out about things like this, because talking about production is important, because how our reality TV entertainment is made really does matter.