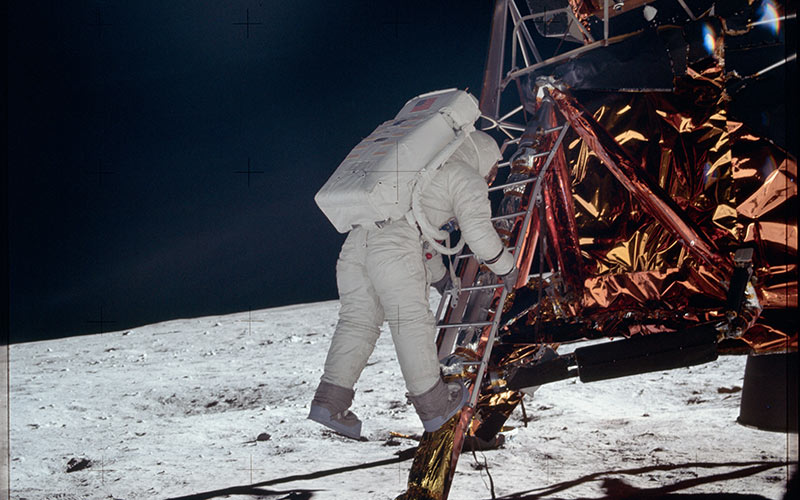 Since The Real World’s premiere in 1992, most reality TV shows have followed the template it established, with sit-down interviews mixed in with footage, allowing cast members to explain what’s happening or what they were thinking during a particular moment.

That format comes directly from documentary film, where interviews with experts and people with first-hand knowledge is interspersed between footage.

Yet that’s exactly what documentary filmmaker Tom Jennings and his team at 1895 Films do, however, immersing us in history as it unfolded, making it feel like things are happening in real time, again.

They’ve been successful: Challenger Disaster: Lost Tapes won an Emmy in 2017, and the MLK: The Assassination Tapes won a Peabody in 2013.

And these types of documentaries are just really watchable: their Challenger doc instantly transported me back to elementary school, when I was watching the everything unfold live on TV, before, during, and after the explosion.

Jennings’ latest documentary premieres Sunday. Apollo: Missions to the Moon (National Geographic Channel, July 7 at 9 p.m.) is the story of the moon landing, which happened 50 years ago on July 20.

But the missions included more than just Apollo 11: There were 11 years of the Apollo missions, starting with the deaths of three astronauts and concluding in December 1972 with astronauts spending 22 hours on the moon.

How do you tell an 11-year story with no narrators? How do you provide context with no experts or interviews? I talked to Tom Jennnings earlier this year about his process, and where exactly he got the idea to produce documentaries this way.

JFK, the book depository, and an idea for a different kind of doc

In the 1990s, Tom Jennings was producing a documentary about John F. Kennedy’s assassination.

He went to the Sixth Floor Museum at Dealey Plaza, which was Lee Harvey Oswald shot and killed Kennedy. Its curator, Gary Mack, “started showing me all of this local footage—hundreds and hundreds of hours,” Jennings told me.

It was “local footage that was really never seen outside of Dallas. We’re so used to Walter Cronkite taking his glasses off and crying—which is all well and good, but we’ve all seen it.”

“I said to Gary, Watching this, you could just let this stuff play. You could make a film just with this. You don’t need to interview anybody, because I’m in it,” Jennings said.

Gary told Tom: “Nobody ever has.”

Jennings decided to do it, but Hollywood didn’t love the idea. “I tried for 12 years to convince a network to let me do this style of documentary filmmaking, and finally National Geographic said, Okay, we’ll give it a shot and see if it works,” he said.

The objection from networks “was context,” Jennings said. They were worried that viewers wouldn’t know what was happening: “How are they going to understand the context of what you’re trying to present?”

Even other documentarians and nonfiction producers didn’t think this kind of documentary would work.

“I was at a conference about 10 years ago, and a very prominent nonfiction producer said, History shows are dead, and if you’re doing anything with archive, you’re really dead. They were on a panel, and I raised my hand and I said, Whose fault is it that archival footage appears to be dead? Is it the fault of the archive, or is it the fault of the producers who haven’t come up with a more clever way of using it? And there’s this silence in this room, and finally one of the other panelists said, That’s a very good question. And nobody answered it.”

“I just felt like: I’m not done watching this stuff yet, and if I can find a way to use it that’s engaging, so that, young or old, people will watch it and be fascinated,” he added.

“We can hold it up journalistically, and if we do the filmmaking right, we can hold it up as a piece of narrative entertainment, and people start to forget that they’re watching archive because it starts to play like a movie.”

“It can be extraordinarily compelling hearing from the people who were there,” Jennings said, “but what we wanted to do was, instead of hearing what it was like, why don’t we just let you experience what it was like? And that’s the difference. To create that with archival images and sounds. We always look for stuff that’s never” been seen in other documentaries.

Before Jennings and his team gather any footage, however, they start with a timeline.

For Apollo: Missions to the Moon, he said, “We have to cover certain things: We have to cover the Apollo 1 fire, we have to cover Apollo 8 and the earth rise, the famous Christmas Eve broadcast, which I actually remember from being a little kid.”

Then, they look for footage—starting with the familiar.

“We do start with the majors just to get the foundational stuff,” Jennings told me. “You can’t do Apollo without having some Walter Cronkite involved. Our trick is to think: Where else can we find this stuff where everybody else isn’t looking? I love doing the work, but it’s very difficult.”

Where other people aren’t looking tends to be with local stations in small TV markets, which is “not as polished as the CBS Evening News, it’s not as well-put together as what you would get out of the NBC News national archives,” he said.

Because local news would only use a few seconds or minutes of footage that a photographer shot on location, there’s a lot that’s unused—well, “unless somebody like me comes along and says, I want to see the raw [footage]. And then you find all of this magic,” Jennings said.

“If we want to tell a more complete story, there might be great things that happened on either side of those moments that we’re all familiar with,” Jennings told me. “It’s not the news; it doesn’t feel like a news broadcast. You feel like you’re in the room.”

They also look beyond the event itself, for “a bigger picture of society as best as we can paint it.” The Apollo documentary begins with Walt Disney discussing Disneyland, for example, and that ties in to the Apollo program.

One thing they never do is use footage from one event to illustrate another. “We don’t fake shots from 1969 for 1968; everything is accurate,” he said. “Everything in it is highly vetted.”

Jennings’ technique is “intended to get people caught up in the moment and forget that they’re watching a bunch of archive footage,” he said.

That presents many challenges: not just arranging the footage in a compelling way without narrators or talking heads, but also sticking to actual history.

“We basically use time-tested narrative formats, like, say, the hero’s journey, Joseph Campbell, that type of thing. It goes back to the Greeks: The hero ventures out into the world for the first time, meets a mentor, has to overcome—it’s like Star Wars. We apply that to these formats. If you look at our film, we have all these storylines firing.”

“When we find a certain storyline stalling, because we can’t go shoot something else, we either look for more that might help, or we pick up another one, so everything starts to weave together. Whether you’re shooting nonfiction or you’re doing something like with all archive sources, I think the failing is not having a picture of what’s the beginning, middle, and end.”

This approach does have limitations. For example, people who were marginalized at the time are far less likely to have been interviewed or filmed.

The book and film Hidden Figures tells the story of black female mathematicians who worked at NASA. While their contributions to the space program were significant, as the title suggests, they were hidden from the historical record.

Jennings said that his team tried to include those stories. “We were obviously aware of that, seeing the movie, heard the story. We went purposefully seeking out whether we could find stuff with them, but they weren’t covered,” he said.

That lack of footage and coverage is “very difficult and very noticeable, and it’s almost impossible” to rectify in this format. “It is a limitation,” he said.

Apollo engineer Frances “Poppy” Northcutt, the only woman in Mission Control, was interviewed during the Apollo years, but often subject to sexist and condescending questions, and not treated, by journalists, as seriously as they treated men.

Jennings’ film does use an interview with her, but as part of his quest to include less-familiar tape, it was an interview “she didn’t remember giving.” His documentary has a “subtle way of making the point” about her exclusion from other footage, which is to point out how, he said, “invariably the first or second question to her was always, What’s it like being a woman working with all these men? That was the best we could do.”

“We want to be true to the storytelling with the media at the time that’s available from that time, and sometimes we can’t fully explain what’s going on,” Jennings said.

Sometimes those gaps are filled in with on-screen information (i.e. the lower third, which will show locations and places), but also with text cards.

Yet the goal is always to just let images tell the story by themselves.

“We try to use none. Our goal is to have it play with nothing,” he said. “People want to watch television, they don’t want to read television.”