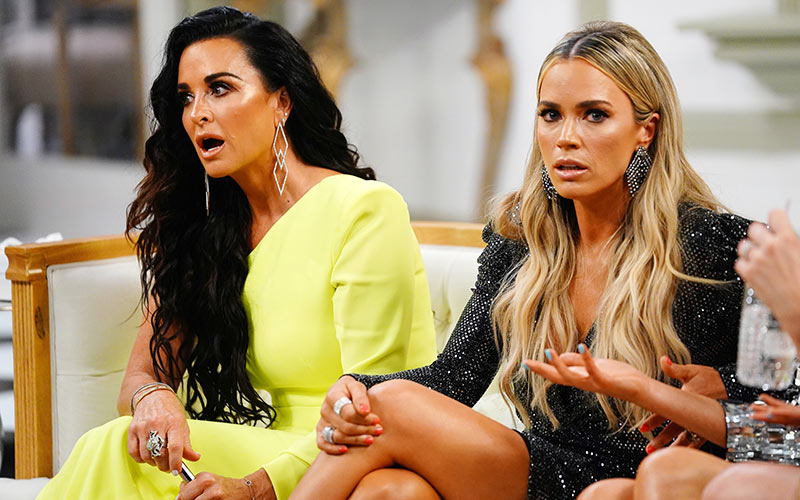 Kyle Richards and Teddi Mellencamp Arroyave on The Real Housewives of Beverly Hills Reunion, which Lisa Vanderpump did not attend. (Photo by Nicole Weingart/Bravo)

There are lots of other reality TV—and televised documentary—premieres, too, so let’s get on with our look at what’s premiering this week.

This Friday, Netflix’s hit and wonderful revival of Queer Eye is back, as are Last Chance U and Comedians in Cars Getting Coffee.

Also Friday, Amazon’s behind-the-scenes NFL series All or Nothing returns with a season focusing on the Carolina Panthers.

The RHONY reunion continues this week, and the three-part The Real Housewives of Beverly Hills reunion begins (Tuesdays at 9).

Lisa Vanderpump didn’t show up, having quit the series after nine seasons, and the events of this past season, which started with the adoption of a dog and got weirder from there.

Bravo says that “stunning no-show … sets Kyle off” in the first part.

Next weekend, two chefs return to television: Robert Irvine’s revival of Restaurant: Impossible is back with a fast-tracked series of new episodes (Food Network, Saturdays at 9).

Meanwhile, Hell’s Kitchen and Masterchef star Gordon Ramsay will be back on TV but not on a competition: Gordon Ramsay: Uncharted (National Geographic Channel, Sundays at 10) follows Ramsay as he travels the world and learns about food—and also competes against locals.

The big question is whether or not it’ll be better than what it sounded like when it was announced—which was not good. I’ll have a review of the show later this week.

MTV’s Ex On The Beach (MTV, Tuesdays at 9) is back with 10 reality stars who want to find love, and then discover their exes show up so they can all audition for The Challenge.

Also back: Say Yes to the Dress (TLC, Saturdays at 9), a look inside the wedding industrial complex.

Lil’ Kim and her friends are going on a cruise for a reality show, and that premise makes VH1’s Girls Cruise (VH1, Mondays at 9) sound like the inverse of Bravo’s Below Deck.

William Shatner hosts The UnXplained (History, Fridays at 10), which says it explores things like “mysterious structures and cursed ancient cities to extraterrestrial sightings and bizarre rituals.”

Tonight’s POV documentary, Bisbee ’17 (PBS, Monday, July 15, at 10) is about the 100th anniversary of 2,000 people in the small copper mining town banding together, at the behest of a mining company, and kidnapping 1,200 immigrants who also worked in the mines. Robert Green’s documentary uses both documentary and scripted footage to tell the story.

Power, Influence and Hip-Hop: The Remarkable Rise of So So Def (WE tv, Thursday, July 18, at 10) profiles producer Jermaine Dupri and “his indelible influence on music over the last 26 years,” as the network said.

Behind Closed Doors (HBO, Tuesday and Wednesday, July 16 and 17, at 8) explores an unsolved double murder in India: a 13-year-old girl and their 45-year-old domestic servant, whose body was discovered the next day after he was identified as a suspect.

Finally, if you haven’t had enough moon landing coverage, there’s: