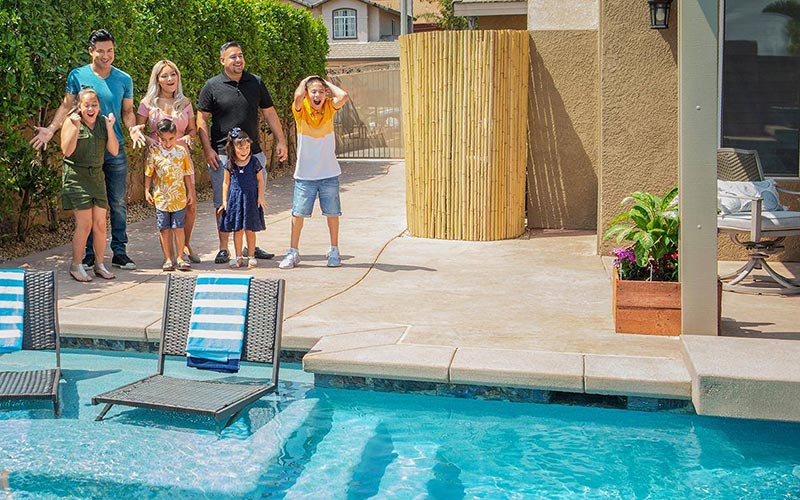 Several shows premiering this week seem themed to summer, or perhaps I’m just thinking about summer, now that I can bake a cake outside by just putting dough on my driveway.

If Mario Lopez showed up to my pool, I’d be surprised, in part because I don’t have a pool. So I’m probably not going to be surprised on Supersize My Pool (HGTV, Saturdays at 9), on which Mario shows up and surprises families.

They will have “their lackluster pools” turned “into spectacular resort-style oases,” according to A&E. Here’s one example of a “lackluster pool

Because summer is a perfect time to sit inside and eat cupcakes while watching other people make cupcakes, Food Network has a new season of Cupcake Championship (Mondays at 9), which is like Chopped but for cupcakes.

And there’s also Crazy Cakes (Cooking Channel, Fridays at 11), which goes behind the scenes of bakeries.

Speaking of eating: The Good, The Bad, The Hungry (ESPN, Tuesday, July 2, at 8 p.m.) is a 30 for 30 documentary about competitive eating. You know, the people who can eat dozens of hot dogs all at once.

Specifically, ESPN says, Nicole Lucas Haimes’ film focuses on “Takeru Kobayashi, the native of Nagano, Japan, who won the Nathan’s Hot Dog Eating Contest six consecutive times, and Joey Chestnut, the Californian who emerged to dethrone the Japanese legend in 2007 and became the face of the sport.”

The new show Out There with Jack Randall (NatGeo WILD, Sundays at 10) follows a man who apprenticed with Steve Irwin as he looks “searches for exotic, endangered and iconic species.”

Also this week, there’s a new season of Revenge Body with Khloé Kardashian (E!, Sundays at 9).

YouTuber and Amazing Race contestant Joey Graceffa has a fourth season of his hybrid scripted/reality murder mystery show coming to YouTube later this month, and right now, the first three seasons are free.

They’re usually behind YouTube’s paywall, but they’re available to stream here until July 31:

POV continues its season with Call Her Ganda (PBS, Monday, July 1, at 10 p.m.), a documentary that follows three women who pursue justice after a United States Marine murdered a Filipina trans woman.