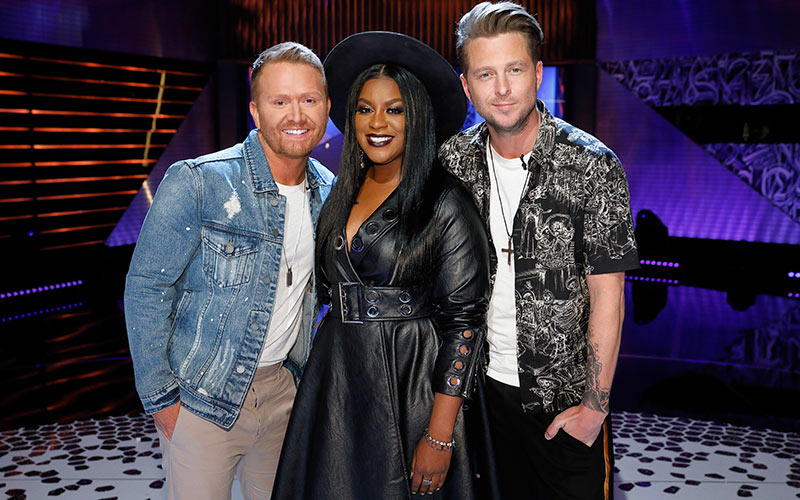 When NBC’s Songland premiered at the end of May, it was a ratings success. I really liked its presentation of the creative process: in each episode, a new singer joins a panel of three producers, and together they listen to and refine original songs performed by songwriters. At the end, the singer chooses one song to record.

Then it vanished. Bring the Funny took over its timeslot.

Episodes with Charlie Puth, OneRepublic, Macklemore, Old Dominion, and Leona Lewis have not yet aired.

The show has definitely not been cancelled mid-run.

When it premiered, it was “the most-watched summer alternative series debut on ABC, CBS, NBC or Fox since June 21, 2017,” as NBC bragged in a press release. It also “generated NBC’s best 18-49 rating in the timeslot with regular programming since Nov. 27, 2018 (1.1), while winning the time period in every key ratings category and beating the timeslot’s original ABC-CBS competition combined in adults 18-49.”

Ratings did drop a little after that, and the show was clearly helped by its lead-in, America’s Got Talent, because when that show aired a recap, its ratings fell.

Still, for that week, the show tied for 10th place overall—not bad at all.

It’s also produced several hit songs already: For example, The Jonas’ Brothers “Greenlight” was #2 on iTunes the morning after the show aired, and bumped Taylor Swift from #1 a day later, The Wrap reported.

When Songland will return, and what America’s Got Talent has to do with its break

Songland didn’t disappear entirely: While the last new episode aired July 2, repeats of those first six episodes have been airing Wednesdays at 9 since the beginning of July.

New episodes will return in that same, new timeslot—Wednesdays at 9— starting on Aug. 14.

Why the six-week break? The answer has to do with America’s Got Talent.

Bring the Funny, the show that replaced Songland, has been doing well following America’s Got Talent, and is much more thematically similar: it’s basically just AGT with only comedic acts.

Bring the Funny is 10 episodes long, so it’ll go into mid-September, staying on Tuesdays right through the finale of AGT.

Sometimes networks premiere a new series behind a popular show in order to encourage people to watch it. It’s then moved from that cushy timeslot to its regular timeslot.

That’s essentially what NBC did here, but it gave Songland six episodes behind America’s Got Talent—summer’s number-one show—instead of one.

I asked NBC why the show was moved, and the network confirmed that it had to do with its lead-in: For both of its brand-new summer competition series, the network “wanted each to have an AGT lead-in,” a spokesperson said.

Both shows will retain their AGT lead-ins, too, because Aug. 14 is also when America’s Got Talent will be start airing a second weekly episode, so Songland will once again be airing new episodes behind AGT.