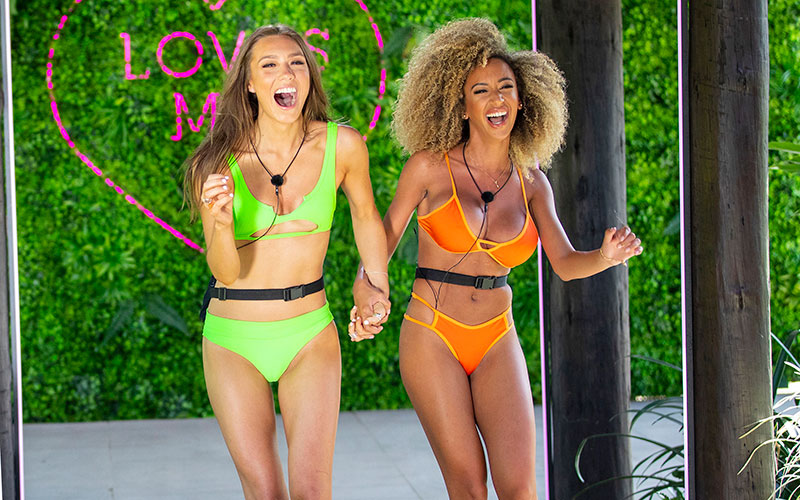 “Brace yourselves, America: get ready for love, lust, and some very tiny swimsuits,” said narrator Matthew Hoffman at the start of CBS’ Love Island, before going on to joke about how the “a lot of throw pillows”

Cue the song “Baby” by Bakermat, and then a slow-motion shot of host Arielle Vandenberg running down the beach, her hands in her hair: “That’s our host Arielle. I think she’s running late.” Cut to the contestants on an airplane, in their very tiny swimsuits.

That is how CBS opened its adaptation of the UK phenomenon: so playfully, so breezily that I could feel the Fiji air coming out of my television.

The only time it showed its hand as a desperate U.S. broadcast network reality series was at the very end, when Kyra’s decision (Cashel? Yamen? Weston?) was interrupted by a commercial, and then the credits.

At least Love Island made fun of its cliffhanger: “You didn’t think you’d find out that easily, did you?” the narrator asked.

The series will be on five nights a week, every weekday, so viewers may need a prompt to tune in tomorrow. Even Big Brother viewers aren’t used to that kind of frequency.

But I’d have returned even without the cliffhanger. That’s because the contestants’ bodies and the production were both pretty flawless and scrummy.

The producers delivered on every level, starting with the soundtrack: Lizzo’s “Juice” early in the episode; “Where’s My Love” by SYML during some tooth-brushing bonding; “Raise Hell” by Dorothy during the fire pit ceremony as Kyra discussed her decision.

Jonathan Adler’s Love Island set popped off the screen. The editing and narration—which, yep, may have been trying just slightly too hard—gave the show a feeling of frivolity that I haven’t seen on broadcast TV since Amy Poheler and Nick Offerman brought Making It to life. (Coincidentally, Adler’s husband Simon Doonan was a judge on Making It.)

In their introductions, especially, the cast walked the line between This is a ridiculous lark! and I’d really like to find love. I actually kind of believed them!

“The guys can’t ghost me. There’s nowhere to hide, and I will find you,” Mallory laughed, a joke on top of a sad truth about modern dating.

Love Island isn’t here to wrestle with any Issues or Ideas, but it did surface some, like when Kyra told Yamen that her previous relationship was with a woman, and he leapt from the couch, freaked out. “Why does it have to be a big deal?” she asked.

I agree with her, though also: kind of a big deal that a network dating show isn’t entirely straight people.

The 90-minute episode—the others will be just one hour—did sag about two-thirds of the way through, as the humor and fun of the introductions faded and instead we were left with scenes with no music, just eavesdropping on conversation. The energetic transitions between them helped keep up the pace, but my attention drifted a little, especially when I realized I might need to start creating a chart to keep track of all the pairings and flirtings and potential dumpings.

I’m hoping its accelerated, live-ish production schedule won’t yield more of the kind of flat scenes and less of the brilliantly conceived first half.

Love Island didn’t exactly break the fourth wall, but it did just lay everything on the surface: the randomness of the rules, the superficiality of pairing up with no information except physical attraction.

The absurdity was frequently acknowledged, by the narrator (“Now that the girls have had seven seconds to really get to know each other”) and the contestants (as Caro wondered if she and Cashel should see other people, she said, “I don’t think we should because this is, like, day two,” and then chuckled at her own words).

That’s where it really differs from Fox’s Paradise Hotel, I think; it was just as superficial and is almost identical on paper in every single way, but it didn’t know what it wanted to be, and so it was nothing.

From its first second, Love Island made a very strong declaration about what it was: frivolous, over-the-top, self-aware. It may not live up to the original, in the ratings or its cheekiness, but it was absolutely enough to get me to tune in tomorrow.