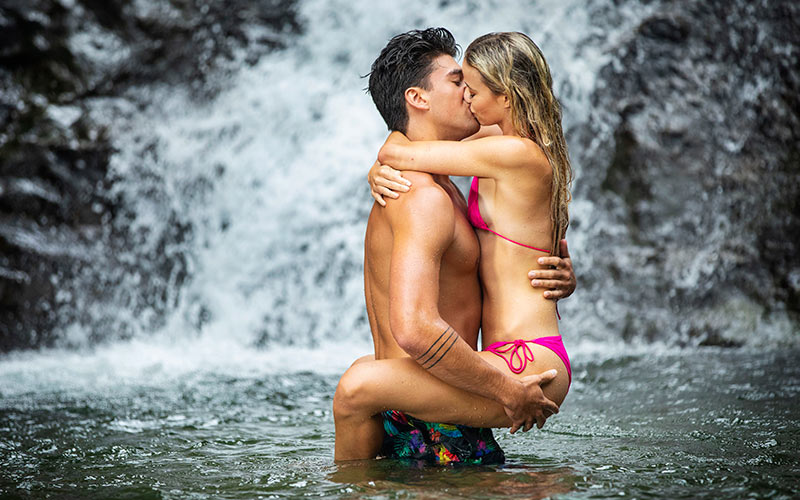 If you haven’t had time to check out Love Island because you’ve been watching Holey Moley or Press Your Luck or other fun shows, or if you’ve been hate-watching Big Brother, treat yourself this weekend by checking it out—or watching it again.

On Saturday, Pop is airing all 14 hours of Love Island: a day-long marathon starting at 9 a.m.

Pop, which CBS owns, is the network that airs the fantastically ridiculous sitcom Schitt’s Creek, and has recently picked up the wonderful sitcom One Day At a Time after Netflix cancelled it. It also airs the Big Brother live feeds every night as Big Brother: After Dark.

Here are three reasons you should watch (or record) some or all of the Love Island marathon:

I’m exaggerating, but only a little: Without that device, without his wit and commentary on both reality television and what’s happening, the show would be, well, Paradise Hotel.

The narration is the glue that holds together lots of other entertaining elements: ridiculous challenges, discussions of relationships and attraction, the drama created by the injection of new hot people, periodic re-coupling and evictions, hot people walking around in bathing suits.

The cast members also have long, uninterrupted conversations, both as couples and about their coupling, and it almost feels like watching in real time. They feel real, as do the connections people have; they’re not mere showmances.

Reality TV shows rarely let conversations breathe this long, and it’s refreshing—and sometimes boring, which is why the narrator helps perk things up.

While I’ve been charmed by the show—it’s a perfect show to have on in the background, or to dip into occasionally—it hasn’t caught on in the U.S. (Of course, it took a while to build to where it is in the UK.)

Ratings have been low but relatively stable. Last week, July 15 to 21, the Wednesday episode tied for 21st place in the 18-49 ratings with four other shows, including a repeat of NBC’s The Wall and Fox’s First Responders Live.

Still, the most spinning and bragging CBS could do in the press release were these two sentences:

“Love Island has been a popular summer show among all key female demos, with its strongest skew among women 18-34. The show has also been a social media star, with several episodes trending among the top 10 topics during the night’s broadcasts.”

I’m glad to see the marathon, and wish CBS had been doing more of this. The network has invested a lot in the production that ends up on the screen (the set design of the villa, music rights) but the marketing hasn’t been as visible and certainly nowhere near as effective.

For one example, the ads that aired on CBS were really weak: they focused on host Arielle Vandenberg, who is essentially never on the show. They also didn’t establish the fun, playful, and witty tone of the series.

The marketing sure didn’t take advantage of Big Brother’s popularity, which is baffling to me, though I’d assume there was a reason.

Repeating 14 episodes on Pop tomorrow probably won’t flip a switch and turn the CBS version into the kind of phenomenon it is in the UK. But I’m thrilled CBS is giving people more opportunities to discover it and experience it.

That’s how I watched most of The Real World in its early years, and it’s how Project Runway went from a bomb to a hit. Hopefully more people will get a chance to experience Love Island‘s wit and humor.