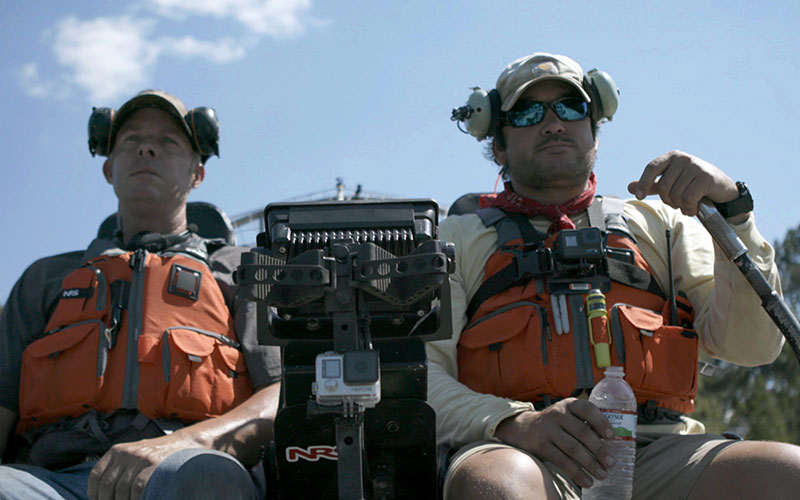 During Hurricane Katrina in 2005, when people were stuck in flooding houses, others jumped in their own boats and rescued more than 10,000 people. They haven’t stopped since, mobilizing during natural disasters, and are known as the Cajun Navy.

Many organizations and groups that now use the name “Cajun Navy,” so it can be used informally or to refer to a specific group, but the general idea is the same: people helping other people in times of disaster and times of need.

A few of those are profiled in the new documentary Cajun Navy (Discovery, tonight at 10), which was produced by Simon Chinn and Jonathan Chinn, who also produced the exceptional Clay Aiken documentary series.

This is not a perfect model for disaster relief. In the introduction to a 2017 GQ feature story, Miriam Markowitz wrote,

“In an age when the governmental bodies charged with our safekeeping are failing during times of both crisis and calm, stretched ever more thinly between natural disasters of increasing magnitude and frequency, amateur outfits like the Cajun Navy seem not just useful but like a patriotic solution to our society’s crumbling infrastructure. The idea of strong-willed, brave citizens working collectively to help each other during an emergency is an appealing one—but it is also a scenario whose utility has its limits, as well as its dangers.”

That appeal is definitely clear, especially as televised entertainment, but also as encouragement and motivation to help other people.

After mentioning he has a 9-year-old son who lives in Los Angeles, producer Jonathan Chinn told me that the Cajun Navy volunteers in the documentary are “from a different part of the country, completely different culture, grew up in a different area with different ideals and ideas, and I’m going to want my son to watch it because these guys can really be great role models for him in terms of how to be a good American—put all the bullshit aside and just have a sense of what’s right.”

“And that’s what these guys are operating on,” he added. “Just an innate, primal sense of what’s right and wrong.”

How British filmmakers embedded with members of the Cajun Navy

The documentary began pre-production in the spring of 2018, when a team went to Louisiana to subjects and film them.

After I asked how the producers found their characters, Jonathan turned to members of the Cajun Navy and said, “What was your take when these British guys showed up with cameras?”

Carlton Boudreaux, who isn’t affiliated with any particular Cajun Navy group, was frank: “They were delaying me. I was trying to pick up and rescue, pick up and rescue, and they were like, Hold on, can I get in the boat. Yeah. Well, let me strap this GoPro onto the boat. Can we do it while we’re rolling? Because I have to go.”

They eventually figured it out.

A team, family: those are the words that members of the production and Cajun Navy used to describe each other when I asked them how, exactly, filmmakers embedded themselves with those who sometimes do life-or-death rescues.

Producer Laura Warner told me that the production relied closely on the people they were filming. “They are quite dangerous scenarios that we found ourselves in, filming,” she said. “We are a team. I’ve only got the camera lens to look at, so I would rely on John and Carlton and whoever just to make sure that I’m not going to get my head bashed by something. You just have to work as if you are a part of the Cajun Navy on the ground.”

Laurie Bridgers, who’s the CFO of the group known as Cajun Navy 2016, said, “We worked that out quite well—it all fit together well, where they were just another member of the Cajun Navy.”

Jon Bridgers, the CEO and founder of Cajun Navy 2016, agreed. He said the embedded crews were first “kind of awkward, but real quickly it wasn’t a problem. It was never really a problem. A lot of times we just did what we normally do and didn’t really pay attention to that camera. They did a great job embedding themselves and not really hanging us up as far as performing some of these missions.”

Carlton added, “They didn’t hold me up whatsoever. Every once in a while, they might say, Oh I forgot batteries in the truck; I’ll be right back. Other than that, everything went as usual for us. They didn’t interfere with our rescue.”

That may have been because of the preparation involved—both in terms of logistics and the story.

Laura told me, “We’d had quite long conversations about the health and safety aspects and making sure we weren’t going to get in the way or risk anybody’s life, but it was also just a matter of making sure that these guys felt really comfortable that they were telling their own story in their own words. We really were just observational documentary makers. This is their life, and their decisions, and their rescues, and their story to tell.”

There were three film crews who’d been trained and were ready to go if a storm approached the Gulf Coast, though in the boats, it was usually just one person with a camera.

“You’re just waiting around for a disaster,” I said. Jonathan said, “But also waiting around for heroic rescues. At least we were following people who were trying to save lives.” Simon added, “The disasters were going to come—they were inevitable.”

With the production based in London, producers watched for storms that might threaten the Gulf Coast during the the 2018 hurricane season, which eventually included Hurricanes Florence and Michael.

Warner told me that when a storm formed, the production “had to decide that it was going to make landfall. We jumped on a plane—jet-lagged, no sleep, prep the kit in the car and then we’d split with whoever was filming, and that’s it, we were fully embedded.”

Once they did come, and once the production had its footage, it had to be distilled into a documentary less than two hours long.

Simon Chinn said the goal was to “give people like this a voice in a different way, as people who are out there doing really inspirational work, setting whatever prejudices some of them may have, to one side, to actually go out there and save lives.”

John Bridgers told me that “we kind of made it clear up front that we didn’t want it to be a quote ‘Hollywood’ film,” turning them into “something that we really weren’t.” He said that didn’t happen: “Ya’ll actually put what ya’ll filmed on there.”

One of their focuses, Laura said, was “about people’s lives intersecting,” though the documentary stays with the Cajun Navy crew. In other words, it doesn’t follow—or follow up on—the people who were rescued.

That’s typical of the Cajun Navy, too. “Very seldom do we even exchange names,” Carlton said.

Laurie added that she often receives “messages from people who’ve been saved, and they want to thank this person. It becomes very difficult because they are like, He was in a silver boat. … We try to take these thank-yous and post them on Facebook. A lot of these guys, they don’t want recognition. They don’t.”

Jon Bridgers said he hopes what he and others are doing catches on, and not just with water rescues after natural disasters.

“I hate to this, but we’re divided, to a certain extent. These disasters and this water actually brings us back together, puts us all back on a level playing field,” he said. “You see love and you see compassion for one another; there’s no bickering, there’s no Republican wanting to choke out a Democrat or vice-versa. Color and race doesn’t matter; we just get out there and make a difference and help people, because we love them. If we didn’t love somebody enough to go out there and do that, they’d die.”

“With this actually being broadcast out there, I’m hoping that it’s gonna actually inspire more people to do exactly what we do. If you don’t want to come with us and do what we’re doing, maybe, hopefully, you’ll start your own little thing. And it might not be during disasters. It might be helping a veteran that doesn’t have a home … there’re so many different needs in the world today, and if everybody does just a little something—you don’t have go out there like I do sometimes, unfortunately, try to go overboard with helping too many people—just do a little bit of something. The more efforts that are being taken out there, that decreases the need.”