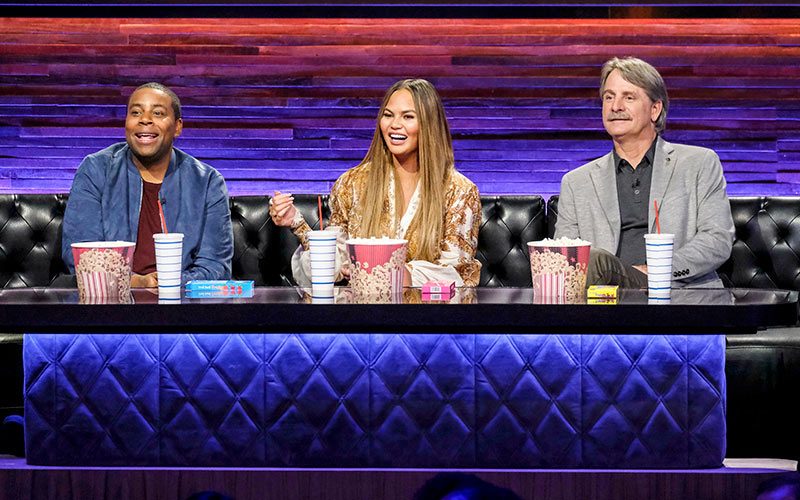 Bring the Funny, NBC’s new reality competition, is not a revival of NBC’s Last Comic Standing, a competition between stand-ups. Instead, it’s essentially America’s Got Talent: Comedy Edition, complete with the ludicrously loud fake crowd screaming.

The studio audience sits at small tables on a set that’s been designed to resemble a comedy club with a low-slung ceiling. It’s not a huge audience, yet they sound like a stadium full of Patriots fans.

This is broadcast network reality TV going for bombast above all else, though the actual funny doesn’t quite rise to that level.

How much of that is expectation? A show that calls itself Bring the Funny (NBC, Tuesdays at 10) makes some promises, and so does that phony, post-production insertion of grandiloquent cheering and applauding.

The actual acts are smaller, sometimes subtler, and there’s some clear talent and entertainment here.

I wish the show had compacted around them to allow the contestants and acts to knock down the show’s walls with their humor. Instead, it sometimes echoes off them.

Bring the Funny leaves its competition behind

Bring the Funny establishes itself as something different than comedy-forward reality TV by broadening beyond stand-ups, and also muting the competition elements.

It’s been four years since NBC aired a season of Last Comic Standing, its competition between stand ups, which nine seasons in fits and starts over 12 years. Some noteworthy comics appeared over its nine seasons, but I remember it most for judge Drew Carey calling the show “crooked and dishonest” once it was revealed that producers were essentially casting the show behind the scenes, using the judges as cover.

This is not a reboot of that show, and for that I’m grateful.

It’s also not Amazon’s Inside Jokes, a show that I highly recommend, which premiered last fall and took a documentary approach to stand-up by following comedians competing for slots in a showcase at the Montreal Just for Laughs festival.

By spending time with them behind the scenes, the series illustrated just how difficult stand-up performances can be. The same joke can ignite the room one night, and disappear the next.

That’s evident on Bring the Funny. Some of its traditional stand-up comics were great, but I also found myself more alert and excited when different kinds of comedic acts appeared.

If it’s an act with humor, it can fit on this stage. The first episode has a musician with jokes and also a sketch troupe that sings, plus a robotic Hall of Presidents-style faux robot comedian.

There’s a range, and also some familiar faces: The second act to perform is Frangela, who I watched regularly on Best Week Ever. They were later cast on NBC’s wreck of a series I’m A Celebrity…Get Me Out Of Here!, and became the first to quit the show (Angela was eliminated, Frances quit), before Spencer Pratt and Heidi Montag also quit.

Host Amanda Seales, who brings more life to the stage than some of the acts, makes it clear up front that these are people and acts who’ve been invited to perform. This is not American Idol: Comedy Edition.

Inviting people to audition is what AGT does, though AGT keeps up the charade that it’s entirely an egalitarian casting process that begins with people standing in line for hours. One AGT auditioner detailed the process and called it “rigged.”

While bringing in pros—pros who deserve more attention and success, sure, but still pros—along with unknowns makes the playing field feel uneven, they also don’t exactly feel in competition with one another. That’s in part because each performance is so different, and in part because there’s barely any competition to be found.

The acts that go through are nearly all of the ones who the episode focuses on by showing their performances in full, and introducing them with bio packages. So, the outcome is not much of a surprise.

There are judges—Kenan Thompson, Chrissy Teigen, and Jeff Foxworthy—who give some mild compliments and soft critiques, but don’t vote after each act. They eventually choose six acts to send through, but the episode doesn’t include their deliberations or their rationale, or the rejected contestants’ feelings.

What they also don’t do is pull too much focus—well, at least compared to their counterparts on America’s Got Talent, who make the show about themselves way too much.

Bring the Funny does give time for John Legend to come hang out at the judge’s table for a moment, but mostly, its attitude seems to be: Eh, let’s skip all that reality TV competition nonsense and just fill the 43 minutes with comedy.

All of this has the effect of making Bring the Funny feel mostly like a showcase, which is fine.

Though I may want more actual competition and less from the production (enough with the fake cheering!), I’m perfectly content with a show that gives talented people a national stage to try to make people laugh.