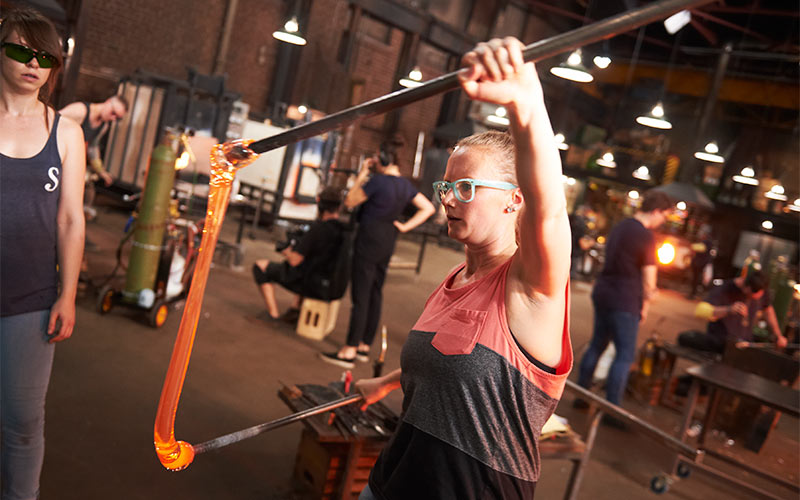 Leah, a contestant on Netflix's Blown Away (Photo by David Leyes/marblemedia)

Drop a reality competition onto the floor and pick up some of the shards and glue them together: that’s what Blown Away feels like.

It’s something new and different, showcasing an art form that hasn’t gotten this kind of televised attention before. But it’s also missing pieces, making it feel so entirely ordinary that it barely stands out except for what it lacks (e.g. many of the standard elements of reality TV talent competitions).

That’s why the flutter of attention it’s gotten in the past two weeks was a little surprising. I’m not sure what to make of the breathless headlines (“Blown Away Is Netflix’s Must-Watch Glassblowing Competition of the Summer”, “…your latest reality obsession”, “…The Next Show You Need To Watch”), because that enthusiasm seems overblown for what’s actually on the screen.

But Netflix’s algorithm surfaced it for me, and it pulled me in, like a gentle yet insistent current pulling me along from episode to episode.

For exposing the world to an art form and craft that has not received television attention, especially not like cooking or fashion, it’s wildly successful. Blown Away introduces tools and techniques, and artists use those to sculpt pieces that are dazzling: smooth and twisted, colorful and clear. There are complex interlocking shapes, sometimes inset one within the other, and end products that can be surprisingly complex or beautifully simple.

I genuinely don’t know how they’re able to create what they do, especially given the time constraints.

There is the flip side to that, and it’s Blown Away’s problem as a competition: there is very, very little that’s shown about the creative process. Their work is is reduced to a montage of moments—some focus, but no coherent arc, a start to finish, raw material to completed artwork.

Blown Away has artistry, talent, and a Big Brother cast member talking about glory holes

The series first aired on the Canadian DIY network Makeful, and was a co-production between that network’s owner, Blue Ant Media, and Netflix. It’s clearly not a recipient of unlimited Netflix cash, judging from the prize package that host Nick Uhas insists is “a life-changing prize package” but is worth, in total, $60,000. The prize includes a residency at the Corning Museum of Glass, which seemed thrilled that the show “will bring the art of glassblowing to a global audience.”

Blown Away lacks what other reality TV competitions have, for better and for worse.

I think that’s mostly about time. The episodes are 23 minutes each: half the length of Top Chef, a third the length of an average Project Runway.

With well under a half-hour for each episode, Blown Away doesn’t have time to waste. It just starts immediately: no time in a house, no interviews where the contestants reflect on the last challenge, no set-up, just host Uhas introducing the challenge. (He’s a former Big Brother contestant and one-time America’s Got Talent auditioner, and he keeps things moving smoothly and keeps the focus on the contestants.)

There’s no time to do anything except acknowledge that each artist has an assistant, who play key roles (blowing, carrying, holding, cutting) but are treated like background. We just dip in and see the artist and their assistant doing something: cutting, twirling, burning, running across the studio to put something into the annealer, a word I now know, thanks to Blown Away.

While we see the judges—”head evaluator” Katherine Gray, Uhas, plus a guest judge—survey the completed pieces, and talk to the artists, there’s no time for their deliberation.

The abbreviated time also means there’s no time to have the edit give focus and attention to the person who might be leaving, so the result is often surprising: perhaps an artist who was mostly in the background and produced so-so work without any big moments.

This is all so choppy: I want a smooth surface, not shards that get stuck in my hand.

But to disagree with myself: it’s also a refreshing divergence from other competitions, which highlight a few people, often with biographical packages, and you know that one of them will be gone by the end of the episode.

Also refreshing: the show’s general amiableness. The artists are supportive, focused more on their own art and vision than each other. When things break, and they often do, they try again.

The editing gives a half-hearted attempt to initially define one person as a sort of villain, but she’s constantly rooting for other contestants, and articulating her vision for her art. The most conflict there is comes between the artists’ vision and the judges’ desires, but even that is fragmentary and fleeting.

Blown Away is so neutral and affable that when Nick Uhas asks “What is a glory hole?” there isn’t even a Mary Berry twinkle in his eye. When he introduces the equipment available to the glass blowers and announces that there are “personal glory holes,” there is no hint that this is funny to childish people like me.

It’s not without puns and jokes, from the title to Uhas asking the contestants, at the beginning of a light-making challenge, “Is everyone ready to get lit?”

Yet the series’ tone is neither playful nor serious. I’m ultimately not sure if Blown Away is clumsy or just compressed, but I’m also not sure that matters: The entire season lasts less than four hours, and it’s an easy watch that also puts an art form and craft on display.