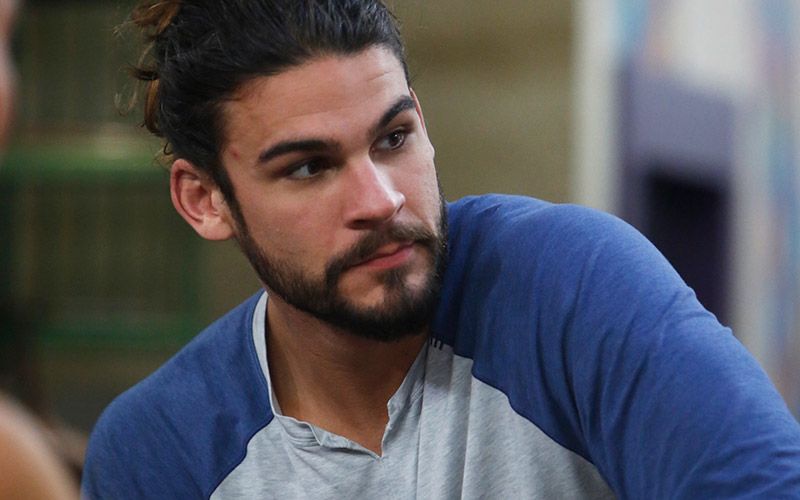 The Big Brother 21 houseguest who got attention for his resemblance to Jason Momoa—and for the accidental nickname “Jason Mimosa”—has been drawing attention on the live feeds and was warned by producers for what he’s been saying, especially about Kemi.

Kemi has been Jack and Jackson’s target in the BB21 game since before the live feeds began, so there isn’t clear context or information about where their hostility comes from. But their comments are increasingly vicious, as live feed watchers have been documenting on social media for the past few days.

Talking about Kemi, Jack told another houseguest, “It’s like, bitch you’re fucking going up and you can play for your veto, but I’m gonna fuck you up. God, dude, she gets me so hyped! I fuckin’ hate…”

The producers cut the feed at that moment, switching to another camera. Watch:

Jackson, who was elected camp director last week and decided banish the only two black contestants, the oldest contestant, and a Latina woman, said he wanted Kemi out in this way: “rip this band-aid off and cut this tumor out of us, because she’s a cancer on this house.”

Some of Jack’s comments are just bizarre criticism, like saying that Kemi’s decision to eat an avocado sandwich after working out is “the dumbest fucking thing.”

Among the things he’s said, as feed watchers have documented, include telling a fellow houseguest, Nick, that he doesn’t talk to Jessica but “I flirt with her just to make her feel good about herself.”

One person has gathered together several clips in a Twitter thread titled “Thread of Jack being problematic,” while someone else gathered clips.

This afternoon, Jack told fellow houseguest Tommy that producers warned him, presumably in the Diary Room, away from the live feeds.

Jack said, according to one feed watcher, “They’re taking it out of context. I just need to be careful what I say. … They (live feeders) saw it. It was production.”

The production’s disclaimers on the live feeds—which says “the Houseguests may reveal prejudices and other beliefs that CBS does not condone”—is appearing more frequently, according to feed watchers.

A petition—and of course, let’s not pretend that online petitions accomplish much—says he should be expelled for “numerous racist things” he’s said and because Jack “has been very aggressive towards the only black woman in the Big Brother house.”

It quotes one specific thing Jack said, which is actually a call-back to something Sam (who was on Big Brother 20) said last summer: “I’ll stomp a mud hole in that bitch’s chest,” she said, and then added, “I can’t believe I said that!”

Of Kemi, Jack said, “Fuckin’ Kemi makes me want to stomp a fucking mud hole though her chest.”

He did not qualify it after saying it, nor point out that it was a reference to something a past houseguest regretted saying, although the other houseguests recognized the reference. Watch:

Jack also referred to both Jessica and Kemi as “fucking maggots” and said she was “fucking toxic.”

Specifically, he said: “It’s crazy that these fucking maggots are just saying shit. … This is the whole reason why I want to get rid of Kemi: because she’s fucking toxic and says shit like that. She said something, she said something that I met with her, that I asked—she put that in Christie’s mind.” Watch:

Hamsterwatch reports that, yesterday, the things Jack and Jackson were saying are “ridiculous and horrid and ugly, and it’s escalating daily.”

Today, Hamsterwatch says that several houseguests reacted negatively to overhearing that houseguests of color might support one another:

Nick told Jack and Sam (at Sam’s urging as he’d already been told) that Ovi told Kemi, Bella, Jessica “we’re both people of color, we need to stick together” (Ovi and Kemi), “pulling that fuckin card.” Sam said that makes the rest of them look bad, and Nick said “it’s fuckin bullshit.” It sounded like Jack was given a talking-to by production to watch what he says, and the content disclaimer seems to be popping up more often when switching feeds, as petitions to remove Jack from the show gathered momentum and began circulating outside our insulated BB world

While Jack said at one point, what I came in here to do is to spread nothing but love, not fill this house with animosity and hatred,” he’s also been cruel toward others, particularly Ovi.

At one point, Jack said to Ovi, “You feelin’ swole right now boss? You look a little swole.” Ovi responded and then walked out into the back yard, and after the door closed, Jack said, in a quieter voice, “Douche.”

There are signs that Jack might be laying off Kemi, perhaps because of his conversation with producers. This afternoon, he told another houseguest, “I actually spoke to Kemi a little bit today. I felt like we talked a lot, actually. It was nice.”

While there has been much more toxic behavior in the Big Brother house again and again in the past—including the eruption of racist, homophobic, and misogynistic comments during Big Brother season 15—it’s very early for what’s supposed to be a light, fun summer reality show to have such ugly behavior.

Recommended for you: I asked CBS executives about this and Big Brother. Here’s what they said.