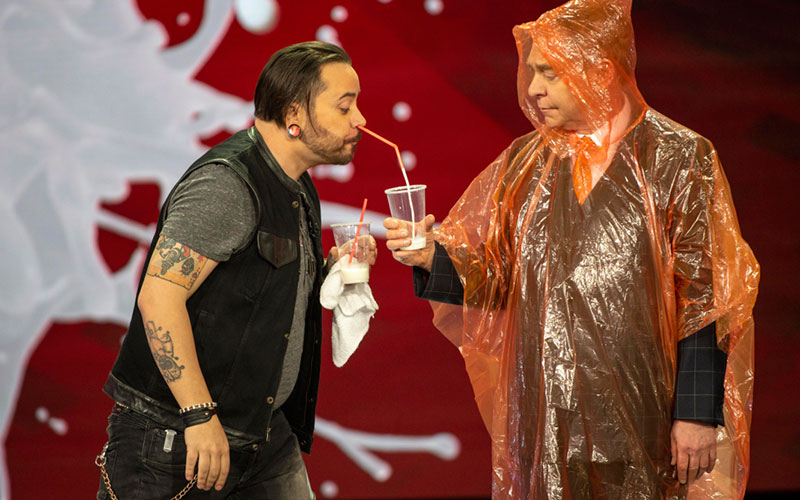 Magician Ryan Stock and Teller on the "Penn & Teller vs. Inventors" episode of Penn & Teller: Fool Us (Photo by Jacob Kepler/The CW)

Good Monday morning! The summer solstice arrives Friday, June 21, giving us our longest day of the year, and the first official day of summer. Summer reality TV, however, lasts much longer than actual summer, so here’s your look at what reality shows are premiering this week, to give you something to do on those long, hot summer days or nights.

Last week, six prime-time game shows premiered, and this week, there are two more, one of which is brand new, sort of:

The best version of The Profit, The Profit: An Inside Look, returns for a new season (CNBC, Tuesdays at 10) of Marcus Lemonis and executive producer Amber Mazzola watching and commenting on old episodes together.

In crime TV, there’s a new season of ATL Homicide (TV One, Mondays at 9), which has Atlanta police detectives sharing of murder investigations; License to Kill (Oxygen, Sundays at 7) on which Botched’s Dr. Terry Dubrow “investigates the jaw-dropping cases of murderous doctors, nurses and medical professionals,” according to Oxygen; and A Lie to Die For (Oxygen, Sundays at 8), which focuses on cover-ups.

More supernatural TV from a network that used to be about travel: Ghosts of Morgan City (Travel Channel, Fridays at 9), which is about people calling for help because of allegedly paranormal stuff in Morgan City, Louisiana, while Haunted Towns (Travel Channel, Fridays at 10) follows The Tennessee Wraith Chasers who explore allegedly haunted towns.

Lady Bunny, Yellowstone Live, and other specials airing this week

The exceptional PBS series of documentaries POV returns for its 32nd season tonight, having premiered in 1988.

The first film this season is Roll Red Roll (PBS, Monday, June 17, at 10, and online amcdoc.org), and it “goes beyond the headlines to explore the Steubenville, Ohio, case where members of a small town’s high school football team sexually assaulted a teenage girl,” according to PBS. It focuses on “the role adults played in suppressing the story.”

If you watch RuPaul’s Drag Race, you’ve seen Lady Bunny multiple times, and heard many references to her contributions to drag culture. One of those, Wigstock came back last summer, and the new documentary Wig (HBO, Tuesday, June 18, at 10 p.m.) “follows celebrated drag queen Lady Bunny as she resurrects Wigstock for a new generation,” HBO said. A press release adds that the doc also “celebrates the early days of New York drag culture, and those personalities and performances that contribute to today’s understanding of queerness, art and identity.”

The Lavender Scare (PBS, Tuesday, June 18, at 9 p.m.) is about a secret 40-year effort inside the “federal government to identify and fire employees suspected of being” gay, according to PBS. Glenn Close narrates.

When Whales Walked: Journeys in Deep Time (PBS and Smithsonian Channel, Wednesday, June 19, at 9 p.m.) uses CGI and graphics to “bring ancient beasts to life,” and follows the scientists who “investigate clues from the fossil record and use 21st-century technology to unlock the evolutionary secrets of crocodiles, birds, whales and elephants,” according to a press release.