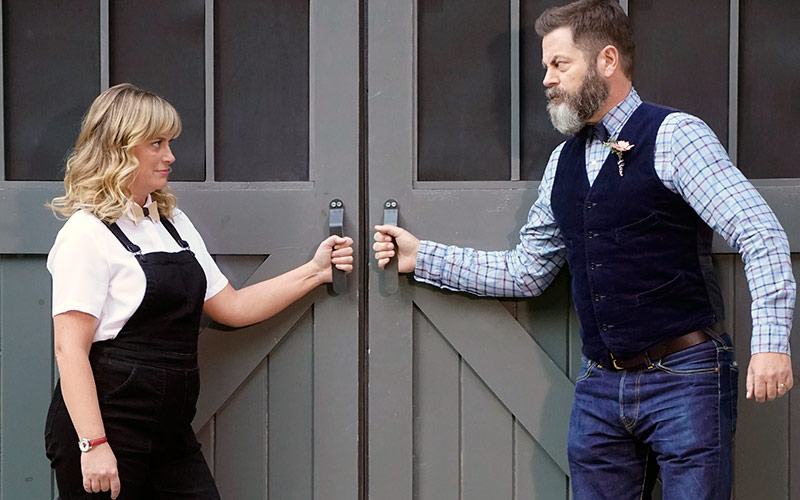 Amy Poehler and Nick Offerman open the barn doors to reveal the winner Making It! during the season-one finale, "Happily Ever Crafter." (Photo by Paul Drinkwater/NBC)

The Television Critics Association announced the nominees for its 35th annual TCA Awards, which will be presented in August. Those include 10 reality TV shows and documentary series across two categories.

The nominees were chosen by the members of the Television Critics Association. A press release says that “[m]ore than 220 professional television critics and journalists from the United States and Canada voted,” and that includes me, since I’m a member and serve on the TCA’s board of directors.

Two of those shows had significant cultural impact earlier this year, giving voice to victims of abuse by two different celebrities.

I also loved America to Me.

Any of those would be strong winners. Of course I’d think that: four of the six nominees made my list of the best reality TV of 2018, and Queer Eye won the TCA Award last year.

Last year’s Great British Baking Show season was its last season on PBS, which brought the show to the U.S. so audiences here—including me!—could fall in love with a competition that was witty and charming, not cutthroat and cruel. So I’d love to see it win.

But I also loved and was charmed by Amy Poehler and Nick Offerman, whose hosting, chemistry, and banter with contestants alone made Making It! one of 2018’s best shows. (It’ll be back later this year, but as a holiday event series.)

All the other TCA Award nominees

Here are the other nominees for TCA Awards, with the exception of the Career Achievement and Heritage Awards, which are announced at the ceremony.