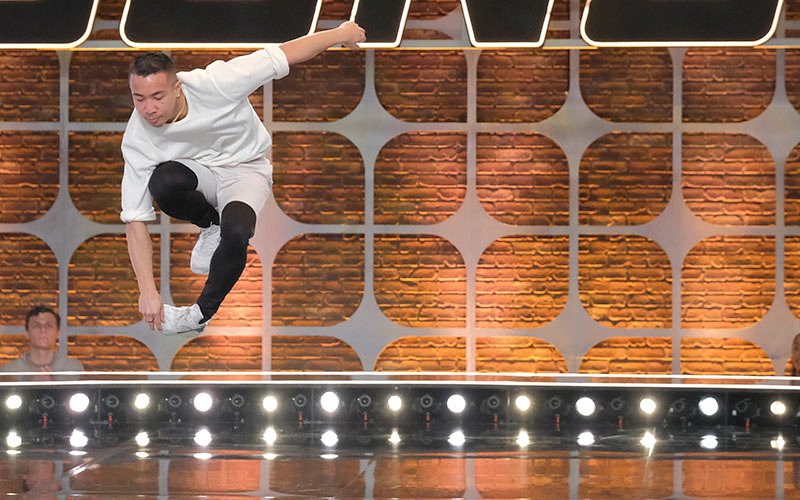 So You Think You Can Dance's new stage is surrounded by a ring of cameras and lights that catch the dancers mid-movement, mid-air. (Photo by Adam Rose/FOX)

It’s easy for reality competitions to get caught in a rut, doing what works season after season. Fox has several examples of that, most notably Hell’s Kitchen, which has been renewed for its 19th and 20th seasons, and continues to fill a buffet full of incompetence for Gordon Ramsay to scream at.

For a while, Fox’s So You Think You Can Dance was in a deep groove, too, growing tired and stale around season 11. It faced an uncertain future season after season. For season 13, it leapt out of that rut with a pivot so hard that the show escaped earth’s gravitational field and went flying into the land of kid reality shows.

Thankfully, it both survived that disaster and recalibrated, returning to its core in 2017 and again last year, and clearly re-establishing itself as broadcast TV’s best reality competition.

In the two years since, it’s made small but significant changes, such as dropping the focus on SYTYCD all-stars who were paired with new contestants. When it returned for its sixteenth season last night, the show had a few more tweaks that kept it true to its core but also moved it forward so it’s not at risk of being overly familiar.

Its new judges, choreographer Laurieann Gibson and dancer Dominic “D-trix” Sandoval, both have lots of experience, but also come from SYTYCD’s deep pool of talent (not from an insane decision).

Dominic’s reactions and emotional responses poured out of him, during dances and after. Laurieann’s feedback was less technical than I expected from a choreographer, but she also connected well with the contestants. They both fit in well with Mary “HOT TAMALE TRAIN” Murphy and Nigel Lythgoe, who are each doing their familiar thing.

The episode itself was familiar: stories, montages of auditions, a kid who was on Dance Moms; a mother who danced with other mothers, Mary Murphy screaming. But it did introduce one major change that was immediately a thrilling addition.

Actual auditions took place in several cities, but auditions in front of the judges have moved to Los Angeles. That seems like a budgetary decision—keeping the production in one studio for the entire season, instead of traveling, moving everyone around, and using rented facilities.

It’s a decision that really works creatively. Being in different cities didn’t really add anything, and now the entire show can take place on SYTYCD’s incredible new stage.

The stage is circular, and it is surrounded by a ring of lights. Next to those are 120 cameras, which create 365-degree freeze-frame images of the dancers frozen in time.

That was commonly known as “bullet time,” thanks to its use in The Matrix. While that film may be 20 years old—The Matrix came out in 1999, where is the black hole that is consuming all of those years—but the effect feels fresh and new in this context.

It allowed me to appreciate the dancers’ majestic and preposterous movements even more. When their bodies fly through moves during their routines, and we see them from a single angle, they are quite impressive.

SYTYCDanceTime, which is what I just decided to call it instead of bullet time, was immediately a fun toy to play with and slobber all over, as the editors treated us to a montage of SYTYCDanceTime images of both dancers and the judges mugging.

As that happened, my excitement came with concern that it could get old quickly. But thankfully, the auditions didn’t overuse it: dances weren’t frozen during the performance, but used as instant replay during the judges’ critiques.

The stage itself is a large, open circle, which at least appears to give more room than the previous stage, and some of the stages used for auditions.

Its backdrop is too busy for me: bricks, an overlay, the show’s logo. It can swallow the dancers, especially in photos:

The one other change I could do without is the addition of a live audience. Typically, dancers who are auditioning have auditioned in front of a small audience of other dancers. Now they face a screaming mob.

I hope that energy is better for the contestants than it is for me. I’ve just had enough of screaming audiences, especially when it’s not matching the visual, whether that’s because audience noises have been sweetened in post-production or just because we can’t see the people who are screaming non-stop for 60 minutes. There are small pockets of audience members behind the stage, and when they’re silent and we’re still hearing roars and cheers, it’s weird.

What So You Think You Can Dance did have, which I am as grateful for as always, were strong and varied dance routines.

My favorite performance was by Sarah “Smac” McCreanor, whose dance embodied the combination of artistry and playfulness that SYTYCD lands on when it’s at its best.

Mary Murphy called Smac “the Lucille Ball of dancing.” That’s a perfect description for a dancer whose routine, which is below, was both technically impressive and also turned a sneeze into a move. I hope for a season full of such delightful surprises.