Although the show aired six seasons and 119 episodes between 2002 and 2013 on Syfy (and originally on the Sci-Fi Channel), there’s a lot I didn’t know about it, including the surprising way the victims of pranks were cast.

On the eve of the debut of uncensored episodes on Netflix, I talked to creator and executive producer Scott Hallock, who also produced other hidden camera and prank shows such as NBC’s Betty White’s Off Their Rockers, $25 Million Dollar Hoax, and Howie Do It.

Scare Tactics had three hosts during its tenure, Shannen Doherty, Stephen Baldwin, and Tracy Morgan, all of whom mostly introduced the pranks, though they would occasionally appear as part of one.

Instead, the show’s focus was on everyday people. In each bit, an accomplice helped to set up a friend, who’d then be placed into a situation populated by actors and terrifying things, such as the spirit of a dead little girl terrorizing a babysitter.

How did that babysitter end up in a house with a pretend ghost and cameras? How are the scares and pranks developed? And what will be different with the show on Netflix, both with the old episodes and potential future ones?

Read on for answers and lots of behind-the-scenes details.

Netflix will be airing “our two most recent seasons unbleeped and unblurred,” Hallock said. Seasons four and five will be streaming.

“Fans are going to get see the shows the way we see it in the edit bays before we have to censor it. The phrases you’ll hear most often, I think, are Holy shit! and What the fuck is that?“

You may have seen the censored version on TV recently, even though Syfy hasn’t aired it since 2016. That’s because MTV2 has the linear TV rights for the United States and Canada, and will keep airing repeats. Now, “Netflix has the rights to air about half of the library” internationally, Hallock said.

The show has also been on TV in other countries: Seasons one to four have previously been distributed around the world, including three seasons that were dubbed with Spanish and French audio. “We’ve seen really good results in India, and Africa, in Europe and in Asia,” Hallock said.

He thinks that’s because “screams translate into any language.”

Hallock sold the show to Netflix, along with his representatives at APA, the talent agency, “because I own the rights exclusively,” he told me. That’s rare in television, since networks tend to retain ownership of seasons and even the format and name. (That’s why, when Syfy killed Face Off, another network couldn’t just pick it up.)

“We really wanted to be smart about how we exploited the rights,” Hallock said, and their deal means that Netflix has the “first look rights to new episodes, spin-offs, movie projects—anything and everything.”

While Netflix is “very interested in new episodes, they wanted to dip their toe in the water first,” he said.

So they’re streaming two seasons to “see how our fans and maybe a new audience responds,” Hallock added. “There’s a whole new generation out there that maybe isn’t aware of Scare Tactics.”

In other words, if the show does well, Netflix will probably order new seasons.

“We’ve got the creative standing by for new episodes,” Hallock said. If that happens, “the goal for Scare Tactics is to get people to believe the unbelievable, and do bigger and better storytelling.”

Hallock wants to “really embrace this idea of bigger, better stories, and the kinds of things we get people to believe. It takes a lot of innovation and storytelling to believe that there’s a monster nearby.”

How Scare Tactics wants its marks to react to being pranked

Since the show has been off the air for years, has it aged at all? Are there any pranks that just don’t hold up as entertainment?

Hallock doesn’t think so. “I think the pranks age really really well. They’re evergreen because they’re comedy,” he told me.

“We pride ourselves on doing the kind of storytelling where we get people to believe things that are absolutely ridiculous,” Hallock said. “The fact that everyone’s set up by a friend or a family member also hopefully takes the sting out of people thinking that it’s mean-spirited.”

The pranks start as an outline of what will happen with the scripted and pre-planned elements. (Someone who identified themselves as a writer, producer, and director on the first four seasons shared a treatment for one prank, “Toilet Full of Scary,” on Reddit, if you want to see what those outlines look like.)

“We really treat our victims as valued guests. We want the reaction to be: That was fun, let’s do it again! Kind of like getting off a roller coaster,” Hallock told me.

Of course, people choose to get on a roller coasters and be terrified. But it turns out that the marks on Scare Tactics have already agreed to be on a reality show before they’re pranked.

The surprising way Scare Tactics is cast, and how the marks consent

While people are not consenting to be scared, in the same way that I know I’m going to be terrified when I go to Halloween Horror Nights, people also choose to go on Scare Tactics—sort of.

When I asked Hallock about the roller coaster metaphor, pointing out that people choose to be scared, he said, “It’s a good point and it’s one we take very seriously. What a lot of people watching the show don’t know is that people have opted in, in a way,” he said.

“The way we cast our marks—as we call the victims in the pranks—they sign up with a reality casting company that they think just does general casting for reality shows.”

Prospective marks are told by casting producers that they could be cast for a variety of shows.

During casting, they “fill out a form, and they tell us a lot about their history, whether they have any medical conditions—which is really important—and also their phobias,” Hallock said.

While they share fears with the production, the show’s producers will actively avoid those things. “Believe it or not, if someone tells us they have a fear of spiders, we won’t use spiders to scare them,” he told me. “We don’t want to shake someone to their core.”

Instead, the production develops “bits that are appropriate for them.”

The accomplices play a role in deciding that. They get involved because the mark listed them as a contact.

“When people apply with our casting company, they put down their names of their three closest friends or family members, and then, a few weeks or months later, we’ll reach out to that friend or accomplice, and say, Hey, your friend doesn’t know it, but they signed up for Scare Tactics. Would you help us with this prank?” Hallock said.

“We kind of vet the prank through the friend. They ask, “Do you think this would be appropriate for them? If the friend says, I love it, than that person becomes our conduit.”

“It really keeps it in the spirit of fun and takes the onus off the show a little bit, because the friend has signed off,” he added.

What happens if the mark doesn’t want to be on TV after being pranked?

Hallock told me that it’s “very rare that someone doesn’t want to be part of the show” after the prank is over.

One example Hallock gave: A mark was at a (pretend) bachelor party at which a stripper disappeared. He “thought it was funny,” but declined to appear on the show because he was running for elected office, as he didn’t want to be associated with a televised bachelor party.

Are the marks and accomplices paid?

Scare Tactics often lures people into situations by promising some kind of temporary work. So do they ever receive compensation?

Yes: both the mark and the accomplice are paid.

The odd-job situation works as a lure, Hallock said, “because a lot of the people who end up being marks on the show are young people—18 to 22-years-olds. A lot of them are college students.”

He said they “jump at the chance. $50 cash for two hours? Absolutely!”

What happened to Scare Tactics’ collaboration with Jason Blum?

In 2017, Variety reported that horror producer Jason Blum’s “Blumhouse Television has teamed with producer Scott Hallock to produce a new edition of the horror reality series.”

But Blum—who’s produced horror films including Get Out, The Purge franchise, and Happy Death Day—is no longer involved.

“We took it out, we pitched the reboot, we got a couple series offers, but for whatever reasons the deals didn’t make,” Hallock said.

“I love Jason Blum because he shares a very similar scaring tactic to Scare Tactics. We both agree that the monster in your head is a lot worse than the monster that you see,” he added.

What happened to the Scare Tactics lawsuit?

Google “Scare Tactics” and you’ll see stories about how one mark, Kara Blac, sued the show, network, and its producers, for being a “nonconsenting and unwitting victim” who received “severe physical and emotional injuries and damages.”

The prank involved was for the show’s pilot back in 2003, and involved an alien who appeared when a car stalled in the middle of nowhere.

What happened to the lawsuit and her claims?

“I can say that it was resolved to everybody’s satisfaction,” Hallock said. “We never went to court. The insurance company stepped up, and basically we reached a settlement with her that was satisfactory to everybody.”

He said that “it ended up, in an odd way, being a good thing for us.”

He said that even she’d wanted to go on a prank show: “She was set up by a good friend of hers who had been an accomplice for us before and had set people up on other shows for us. She had actually asked this friend to set her up on one of these shows. So, it was something that was just unfortunate she reacted the way she did.”

Hallock added, “I’m knocking on wood as I say this: We haven’t had any incidents like that since the pilot, which was over 15 years ago. We like to say: Scaring people safely since 2003.“ 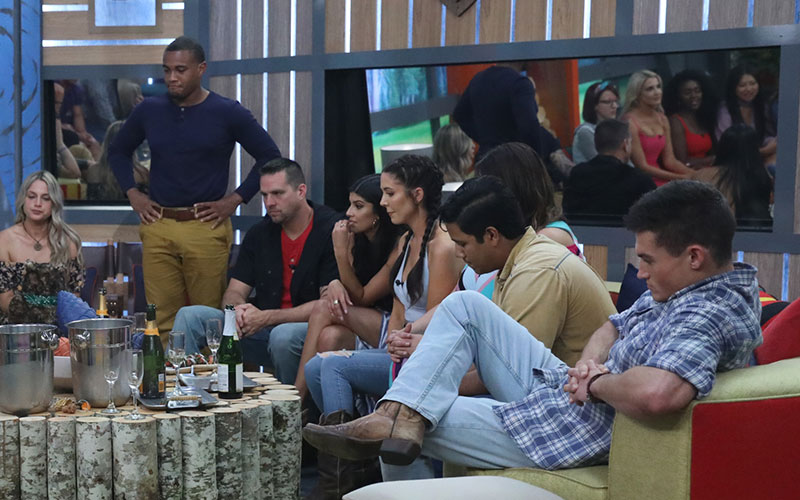 Next
Love Island's cast: CBS' first Islanders are all in their 20s
Click here to cancel reply.