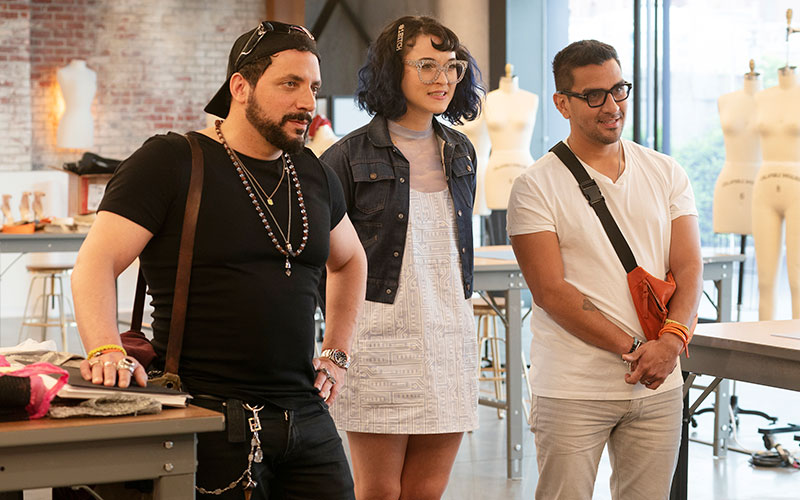 My concern with Bravo’s Project Runway was that, without Heidi Klum and Tim Gunn at its center, it would have collapsed into a limp puddle, like an inflatable lawn Christmas decoration laying on damp grass in the morning, after it’s been unplugged.

It’s been the opposite: inflated so much it floated off and became a spectacular new version of itself. Project Runway season 17 shook off all the cruft that accumulated during the format’s time at Lifetime, and leapt out of that rut with innovative challenges and a cast of contestants and judges that I loved spending time with each week.

I’ve rolled my eyes at its Emmy nominations these past few years—I still watched and often enjoyed the show, but its repeat nominations (for the show, and for Heidi and Tim as co-hosts) felt more like lazy Emmy voters just choosing the show they were familiar with.

But this year: it’s earned an Emmy nomination, and even a win. (There are 53 shows eligible to be nominated for competition reality show, and just scanning that list suggests to me that Project Runway will likely, hopefully be nominated again.)

The finale had another series of strong choices, including the decision to do its own runway show instead of one at Fashion Week. That meant a visually dazzling venue and also just more attention on the contestants and less on OMG FASHION WEEK.

In many ways, that was the story for each of the final three—Sebastian Grey, Hester Sunshine, and Garo Sparo—each of whom struggled with their final collection, despite having five months to put it together, and, in last night’s finale, no additional challenges to complete. The only twist, and it wasn’t really that, was a choice of whether or not to go to Mood.

That brings me to Christian Siriano, who gave them that choice and was perhaps the highlight of the finale for me. These episodes were filmed recently, and there is a lot of time and distance between finale Christian and first-episode Christian.

As host/mentor, Christian Siriano started tentatively, but at the end of the season, he was in What the fuck are you doing?! mode, and I am here for it. His confidence in the advice he was giving is still counterbalanced by anxiety for the contestants (“Listen, it was hard! I was very stressed, a lot,” he told the final three), and that all manifests as a strong combination of empathy and constructive, considerate advice. He helped!

His help was often filtered through humor, and more of Christian’s personality and personableness showed up as the season progressed. “Are you going to air cut that? I’m going to cut you!” he joked to Garo. When he learned Garo was going to dump “the only thing [the judges’] liked” from the pre-final runway, Christian said, “Oh, I’m going to black out.”

I also adored his annoyance at having to be at Mood early in the morning with Sebastian, who decided to go there simply because he was struggling to make decisions, and who ended up using just thread from his trip.

Also it’s just wildly fun to watch Christian try to herd the contestants—especially Hester, who didn’t want to stop working to gather ’round.

The winner of Project Runway 17

Going into the finale, I thought this was Hester Sunshine’s season to lose. She been the most consistent designer, both in terms of winning challenges and in her point of view. Perhaps I also thought she’d win because her pieces are louder and more dynamic, which makes it easier for them to stand out to lay people like me, and seem more future-of-fashion than work that’s subtler.

During the final runway show, DVF went from saying “she’s wild” to “she’s talented.” Later, she told Hester, “The humor of it all! It really says Fuck you. If you don’t win, you can work for me.”

I have no doubt Hester will find lots of work after this—as will all of the finalists, and also fourth-place Bishme Cromartie, who tragically fell apart during their final challenge, collapsing under the pressures of both the competition and his personal life (people died, his sister was diagnosed with cancer). It turned out the entire season was a struggle for him, arriving at “a point in my life when I felt the lowest,” he wrote on Instagram:

The win, however, went to Sebastian, who finally figured out how to talk about his work, which he resisted all season. The judges were thrilled with both his technical work and precision, and also how wearable and sophisticated his clothes were.

Garo was eliminated immediately; his clothes had technical issues, and also he just made some bad choices with his final collection, especially in leaving out pieces the judges said they loved.

Through all of this, I’d have been fine with any of them winning, both because they’ve each done outstanding work, but also because there was such supportiveness and camaraderie among them—and among nearly all of the cast this season. It was just such a pleasant group to spend time with. I was rooting for them all.

And I am now rooting for Project Runway to be able to keep up this momentum, to find another cast as creative and personable, to keep up the creativity with its challenges when it returns this fall. For now, though, Project Runway is definitely back in as must-see, high-quality reality TV.