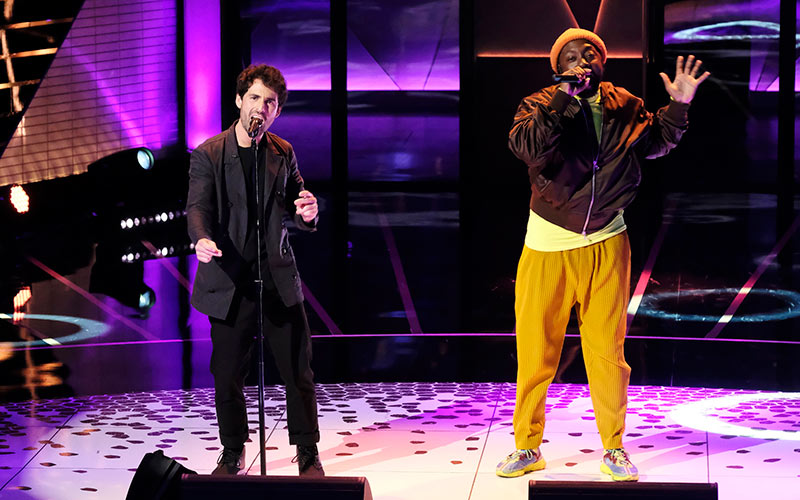 In the first episode of NBC’s new competition series Songland, John Legend describes the process of writing songs as “collaborative,” and then says, “This is how it works.”

Since this is a slick reality show production, in which songs go from early drafts to tracks on major artists’ albums in under an hour, that’s doubtful. But I don’t doubt that Songland is giving us a drone’s-eye view of the creative process that is song writing and producing.

This isn’t the first songwriting reality show; there was Bravo’s 2011 Platinum Hit, with Kara Dioguardi and Jewel, which tried for the Project Runway model by using “innovative songwriting challenges” and “personal drama.” That I cannot remember a thing about it except that it existed probably explains enough.

Songland takes a very different approach. Each episode has a different featured artist—Meghan Trainor, The Jonas Brothers, Kelsea Ballerini, will.i.am, and John Legend are the first to appear—and four contestants/songwriters pitch that artist by performing a song they’ve written.

The least interesting part is hearing the songwriter perform their own songs, even when they’re decent-enough singers; it’s probably my singing competition fatigue, but there’s rarely any kind of spark.

But the room quickly is set ablaze by what happens next: The artist and mentor-producers immediately begin to revise the song—sometimes rewriting, sometimes reworking, usually riffing.

Musicians join in, and soon that collaboration finds and produces a shower of sparks. It’s a captivating romp through the creative process.

Tedder, Dean, and McAnally are valuable contributors, but the show leans heavily on the guest artist. Episode two’s star, will.i.am, was so much more engaged and invested than episode one’s John Legend, who often seemed bored, or at least faded in comparison to will.i.am’s energy and enthusiasm for the songs, their writers, and their potential.

The twist at the end of will.i.am’s episode—he dumped three songs from the Black Eyed Peas album and included all three of the Songland songwriters’ songs instead—could have been an eye-rolling twist, but instead came across as genuine passion for the songs.

The pitches take more than half the episode, and then it transitions into the least-interesting part: each mentor/producer works with one contestant to develop the song. All of this lasts for just five minutes, so it breezes over the actual development and production process, giving us just flashes of decisions.

Then we’re back to having the contestants performing the revised song for the panel. At the end, the artist picks one song and then records it.

What’s most refreshing is the one-off format: so many talent competitions are insufferably long, dragging out auditions and various rounds of competition, until months and seasons have passed, babies have been born, polar ice caps have melted, and Gordon Ramsay has filmed 81 new seasons of Hell’s Kitchen.

If anything, though, the episodes move a bit too quickly, skimming over some of the leaps the songs take. Still, it gives the most time to that initial riffing, which is so entertaining and instructive that I’d be glad to just want to watch more of that.

As satisfying as it is to suddenly see will.i.am in a music video singing the lyrics that he was first introduced to less than a half hour earlier in television time, the conclusions also take another leap past a lot of creative decisions. And of course it is: this is a prime-time NBC reality show, not a 10-hour documentary series about songwriting. For a summer series, though, especially one that’s paired with that noisemaker America’s Got Talent, Songland comes across as thoughtful and intimate, and it’s a welcome addition to the creativity competition genre.