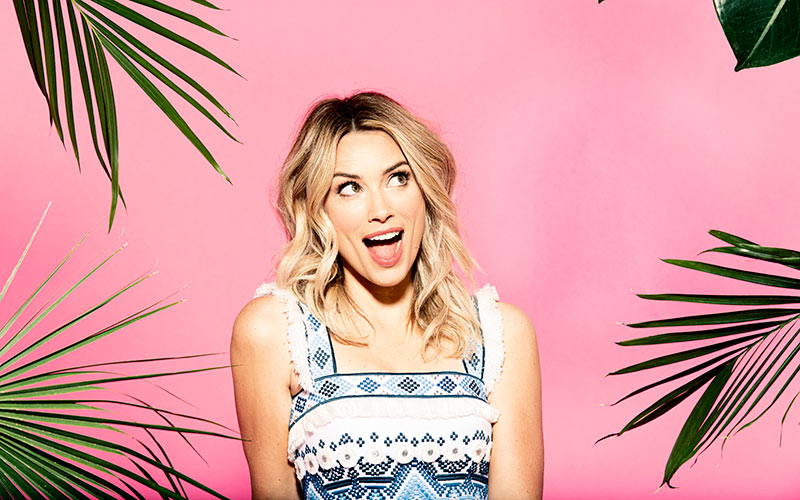 Arielle Vandenberg is the host of CBS' version of Love Island. (Photo by Timothy Kuratek/CBS Entertainment)

CBS announced the initial cast of Love Island Islanders, the 11 people who will pair up or be sent home.

The CBS show is starting with six women and five men, meaning one of the women will end up un-paired and leave first.

Just like Bachelor in Paradise and Paradise Hotel (from which Love Island has essentially taken its format), new cast members will be brought in throughout the season, so this is just the initial group.

Last week, the show announced that actor and comedian Arielle Vandenberg will host the CBS version; she’s been featured in teaser ads since then.

Love Island premieres next week, and then will air every weeknight for five weeks, which means 22 episodes overall.

The Islanders on CBS’ Love Island

Here is the initial cast of Love Island, along with CBS’ description of their interests, including some celebrity crushes or fun facts.

Caroline “Caro” Viehweg, 21
Los Angeles
Marketing Student
Looking for a guy who is spiritual, loving, friendly, funny and authentic.
Celebrity crush: The Rock because he is sexy, strong, powerful and hardworking.

Mallory Santic, 25
Vancouver, Wash.
Analyst for Nike
Looking for someone who is motivated, independent, fun, wild and spontaneous.
Biggest pet peeve in a partner: loud chewer

Yamen Sanders, 24
Los Angeles
Real Estate Agent
Friends describe him as the life of the party and the best person to get advice from.
Celebrity crush: Amber Rose

Weston Richey, 25
Dallas
Photographer
He’s looking for someone beautiful on the inside and out, and a great smile will really win him over.
Fun fact: He built his own house!

Zac Mirabelli, 22
Chicago
Grocery Store Cashier
Looking for a trustworthy, supportive and goofy girl who brings out the best in him.
Celebrity crush: Rachel McAdams