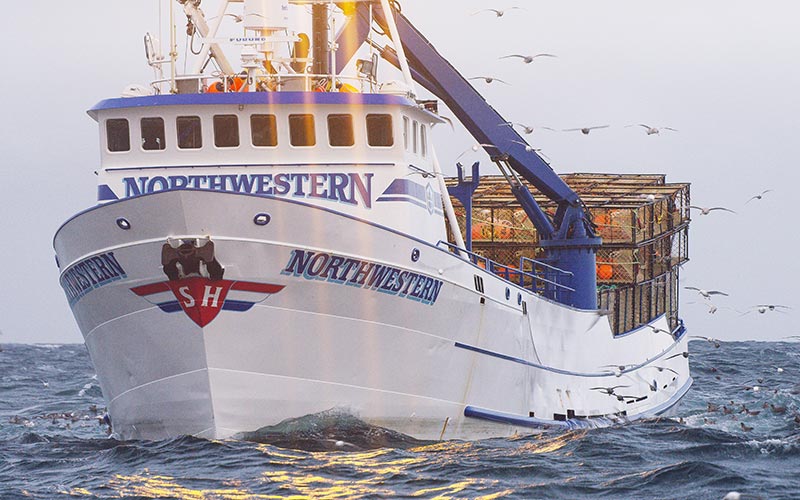 The Northwestern, as seen on episode three of Deadliest Catch season 15. (Photo by Discovery)

As its name suggests, Deadliest Catch, which is currently airing its 15th season on the Discovery Channel, involves challenging work, and that’s also true of the film crew: there are just two people on each ship, both of whom film and act as producers, too.

That means there are no audio engineers or sound techs to record or mix audio. While crew members do wear mics, and cameras on the deck do record audio, a lot of what we hear is actually created in post-production.

That’s according to a story in Emmy Magazine, which quotes audio supervisor Mike Morrell, who also worked on Animal Planet’s Whale Wars and says that “The mics are going into the most hostile environment for a mic: high winds and saltwater. The salt immediately starts to corrode the electronic circuitry.”

Most shows have their cast members wear mics on their bodies—and that’s even true of Survivor: during challenges, contestants are outfitted with individual lavalier mics and mic packs, which you can sometimes see hidden beneath a buff or swimsuit. (At other times, like at camp, contestants are recorded using boom mics or mics attached to cameras.)

The same thing happens to both the film crew and the crew of the boat on Deadliest Catch. The magazine reports that “deck shooters have lav mics,” and so does the crew of the boat, who “wear lavalier mics, usually hidden in their shirts and connected to transmitters in waterproof tubes.” They use “at least 200 mics a season,” that’s how easily they can get damaged.

Also, there’s a camera in the wheelhouse, which records audio of the captain and any other people who are there, too.

Executive producer Decker Watson, who’s won two Emmys for his work on the show and used to do audio, told the magazine that “everything else is done in post-production.”

In other words, if it’s not recorded in the wheelhouse or by the mics being worn by deckhands, it’s sound that’s created in post-production.

That includes sounds of waves or crab pots smashing into the deck. The show’s sound designer, Bob Bronow, “reduces noise and recreates sounds as needed,” according to Emmy Magazine, and he “has amassed a digital library of show sounds, such as crashing waves.” He also has “a ‘futz’ track, which he uses to simulate a voice coming through a speaker, such as when the crew on deck speaks with the captain in the wheelhouse.”

Bronow, who has won two Emmys for Deadliest Catch, told the magazine that “it’s important to match the sound to the visual, to involve the viewer.”

All of that work on the sound—including adding Mike Rowe’s narration and music—can take 35 hours per episode.

All this makes Deadliest Catch similar to nature documentaries, which typically don’t record any sound on location, often because nature photographers are too far away. In the Discovery Channel show’s case, though, nature may be too close.

Related: How and why nature documentaries lie to us