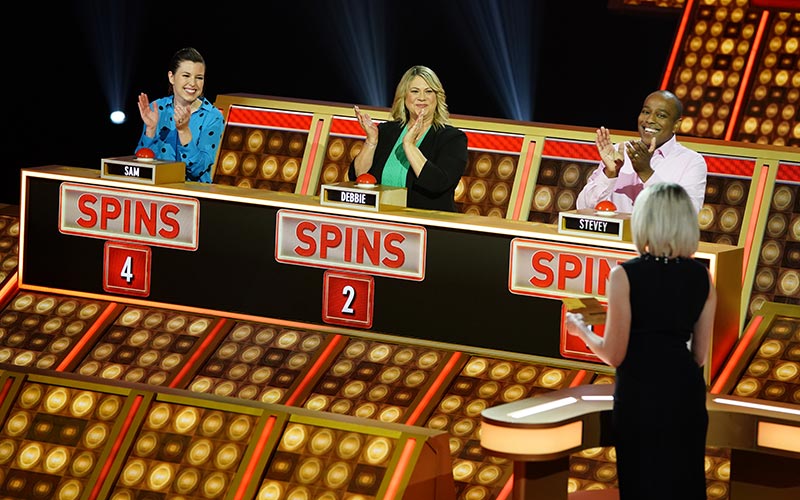 By now, there is no question that ABC’s alternative and reality TV team, led by Rob Mills, knows how to reboot a game show: For the past few years, they’ve repeatedly made the simple yet critical choice to honor the original versions of shows they’re rebooting, right down to the Match Game’s shag carpeting.

So I had no doubt that the revival of Press Your Luck, which aired a special preview last night and premieres in its usual timeslot tonight (ABC, Wednesdays at 8), would be true to the game show I loved as a kid.

This would not be Whammy! The All-New Press Your Luck, an attempt to recreate a 1980s CBS show for a 2000s audience. No, this would be everything from the 1980s transported into high definition.

And it was: the rotating set, the sound effects. The contestants clapping awkwardly at chin level, so their clapping is visible in the frame. Even, brilliantly, the stilted animation of the celebrating Whammies.

This was not a mist of nostalgia, it was a cannonball into childhood summer and sick days. I was so, so excited to welcome this old friend to prime-time television in my 40s.

I was also excited for the one major change, new host Elizabeth Banks. (The original host, Peter Tomarken, died with his wife in 2006 in a private plane crash; they were flying to pick up and transport someone who needed medical treatment at UCLA.)

The format, however, gives her far less to do than some of her other ABC game show host peers. Match Game’s Alec Baldwin has ridiculous fill-in-the-blank answers to react to, and a panel of witty celebrities to banter with, for example.

Elizabeth Banks mostly had very precise and technical tasks and asks to accomplish. Although her teleprompter reading wasn’t subtle, she executed the other parts well, and there was more room for looser conversation in the show’s second half.

I’d forgotten how questions are asked and answered: the answer given by the first person to buzz in becomes the first answer in a multiple-choice question, which the other two contestants then answer. A correct first answer wins three spins; a correct answer from the multiple-choice list wins one spin. I remember being impressed by how fast Tomarken could adapt his list of answers to whatever the person just said, and Banks did similarly quick work of it.

Everything looked great, but I was surprised by how bored I was in the first few minutes. The questions weren’t challenging, and the first few spins of the first game were, well, surprisingly boring.

Watching someone rack up a few thousand dollars and generic prizes—another of the wonderful calls back to the original were some generic prizes, although there was a Jaguar and a very conspicuous Walt Disney World logo for the “Orlando” prize, damn you, Disney!—is nice, but not what I tuned in for.

I was waiting for a Whammy to fuck things up.

And then one arrived, and it was glorious: a halting, jerking animated Whammy version of Bachelor host Chris Harrison—which even used his voice, albeit modulated to sound like a Whammy.

The second Whammy was Oprah, who got crushed by a car. There was also a return of the jackhammering Whammy.

The show needs tension, needs losses, needs big prize values to be risked with every spin. It needs competition and strategy, especially with passed spins. That’s because contestants must play any spins passed to them, so the person in the lead can easily be sabotaged by a passed spin and a Whammy.

In the first game, someone with just $3,500 passed two spins to the person with $45,970—and she immediately hit a Whammy. That’s why I loved watching this game: it moves fast and delivers a lot of successes and failures, and really builds momentum.

There’s something else I forgot about: Acquiring four Whammys—which still popped up as physical cards from within the desk! I love you for your attention to detail, ABC and Fremantle!—means you’re out of the game forever. The chair sits empty, a reminder of the damage those little cartoon bastards can do.

Press Your Luck added a bonus round

And welcome, new bonus round. While the original Press Your Luck just ended after the second visit to the big board, ABC added a six-round bonus round, turning this from a half-hour show into an hour-long one.

That’s a risk, since it’s a significant change. And as Elizabeth Banks introduced it, the rules were a little muddled, especially when she said that earning $500,000 in cash and prizes meant the player would just win $1 million.

But ultimately, the bonus round was no different than regular game play, and that’s what made it work: just one contestant versus the board, playing spins and deciding whether or not to risk everything and press their luck in another round with even bigger prizes.

In a clever (bordering on saccharine) addition, some of the prizes were created specifically for the player. It was a way to sneak in some personal connection with the contestant and raise the emotional stakes, and, yep, it worked.

When Stevie hit the “baby stuff” prize, it left his husband in tears. And then, of course, a Whammy showed up. My jaw literally dropped several times during the bonus round.

It was quite an arc to the episode, from Stevie failing to answer the game’s first question because he buzzed in before Elizabeth Banks even read it, to winning—and losing—some emotional prizes.

With their revival of Press Your Luck, ABC and Fremantle managed to both recreate and honor the original while adding to it. They’ve earned their Big Bucks.