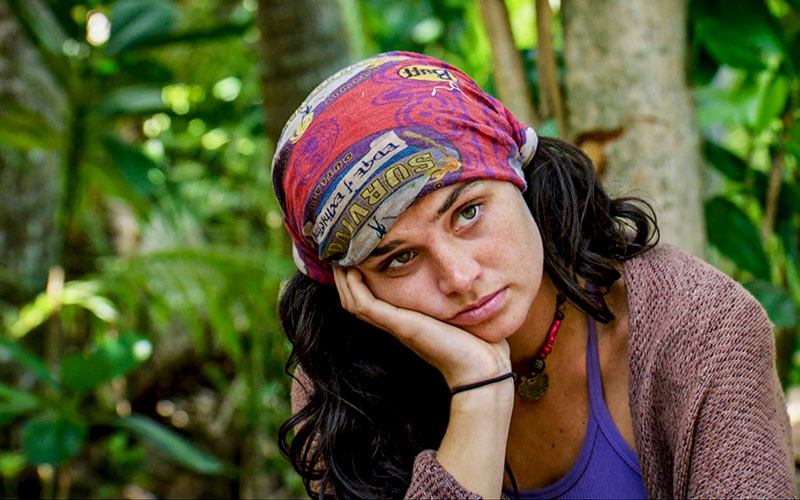 That's how I feel about this season, too, Lauren. (Image from Survivor via CBS)

For the second week in a row, Rick Devens took the spotlight on Survivor: Edge of Extinction. He ran around pretending to look for an idol, gleeful that everyone was following him.

Then, at Tribal Council, he lowered the lights, pulled out his Casio keyboard, and started his now-weekly one-man production, dramatically revealing the hidden immunity idol. CYMBAL CRASH

Then Rick declared he’d play it for Julie. Since he already had immunity, he told the alliance of Lauren, Victoria, Gavin, and Aurora that they would have to vote out one of their own.

If he’d pulled out a roll of butcher paper, some glitter, glue, and Sharpies, and created a huge banner that said, “Congratulations Rick on being the best!!!!!”, that would have been less self-congratulatory than what he did.

Except: He didn’t play the idol. Of course he didn’t! He’s the person everyone wants to vote out, and he needs it in case Jeff Probst doesn’t FedEx him another handful of idols and advantages next week.

Even though Julie wasn’t protected, the tribe voted out Aurora unanimously. She was convinced that everyone else fell for Rick’s performance; I’d guess the jury also fell for it, too.

Except: The vote literally had nothing to do with Rick Devens and his performance and his idol.

The Aurora vote came about through a series of conversations. Earlier, after Victoria pointed out that Julie and Rick would likely vote for Aurora, we heard Julie telling Rick, “Maybe they’ll turn on Aurora on their own tonight.” Then Julie talked to Lauren, basically arguing that Aurora was much more of a threat. Lauren pitched that idea—keeping Julie, an easy final three goat—to her ally Gavin, who talked to Victoria.

While they seemed skeptical in the moment—especially because Victoria already knew that Lauren wanted to keep Julie—they clearly came around to the idea.

When Devens made his declaration, the other tribe members barely flinched. No one seemed amused. Well, except the jury, and clearly the editors, who know they have a telegenic star in Rick Devens.

The others didn’t make a plan to split the vote just in case Devens was lying. So they were voting out Aurora regardless of what Rick Devens did or did not do with his idol.

In other words, the Aurora vote did not happen because of Rick Devens. Yet that’s pretty much what the jury seemed to take away. So that’s the second week in a row that he walked away with credit for something that Lauren originated and actually did (with a nudge from Julie, and obviously with Victoria and Gavin voting that way too).

Is Rick Devens just marching toward an inevitable win?

Rick may win $1 million next week, and if he does, he’s certainly played the game that Survivor has given him to play. But what game is that? He won individual immunity: perfect. Yet he’s pretty much never been in the loop, and already been voted out once.

I’d usually root for an underdog who clawed their way back to the top by using their relationships with the other players (he has none; they won’t talk strategy with him) and clever strategy (he has none that we’ve been privy to). I’d much rather watch someone with a cheerful disposition than someone who’s a grumpy ass—and Rick is fun to watch.

But he is also just playing Get Out of Jail Free cards to cover for his lack of game play. When Rick found the idol, he said, “I’m gonna win this game. I am working harder than everybody else.” At searching for idols, sure. At doing anything else? Nope.

Again, good for him! Use what the game gives you. But that isn’t an interesting game. Gavin said “Devens is the idol and advantage king right now,” and watching an advantage king win is about as satisfying as watching Cirie be voted off by default: it’s not.

Rick said, “I love making them paranoid, because it makes them mentally and emotionally exhausted. It brings me joy, which gives me energy and it’s going to push me through this game.” It’s doing the opposite for me.

These two tweets sum it up very well:

That is the central issue with this season: nothing matters. It drained a lot of life out of earlier votes and blindsides, because no one left our television screens.

The potential idol in Rick Devens’ spokes is whoever returns from the Edge of Extinction next week. This episode, those on Extinction prepared to win their way back into the game next week by reading letters. From themselves.

Now, I think writing letters to oneself is a worthwhile exercise. And some of the things that they said—again, about themselves—were charming and/or insightful.

Is it great television? Eh. At the very least, it was a far more leisurely stroll through the Edge of Extinction than the usual manic cut-and-run. This entire episode had so much extra time to fill.

I’d normally appreciate a more leisurely pace, but the b-roll footage of nature got more time in this episode than some contestants got all season long. It just felt really weird considering that some episodes this season have been so overstuffed they didn’t even have time for the “previously on Survivor” or voting confessional segments.

There were two obstacle course challenges—hurray for not having to watch people stand and balance!—and though the fundamental challenge was similar to past ones, each had new segments that we hadn’t seen before.

And there was also a legitimate reward, a helicopter flight to a resort for a poolside meal, complete with a “fuck you” flyover of camp just to rub it in to Aurora’s face that Gavin didn’t choose her to go on the reward he won.

That’s kind of what Survivor is doing with Rick Devens: Rubbing him in our faces to remind us that this season’s twists and editing have taken it far away from the one it used to be.