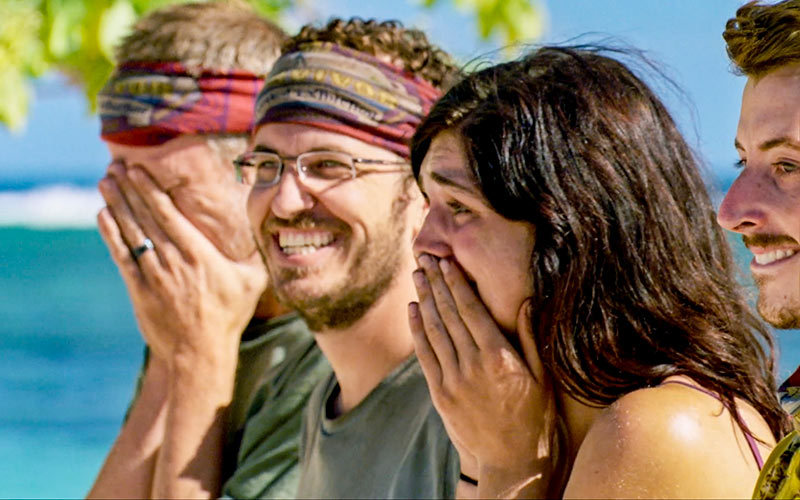 “Well, I’ve heard a lot of lovely things about you. I really have. Everybody loves you,” Reem told Ron when he arrived on the Edge of Extinction after becoming the 17 millionth member of the Survivor jury. When he said he’d lied frequently, Reem replied, “It’s a game. Everybody’s a liar.”

Reem wins the quip game once again, but what’s so fascinating to me is that her version of Ron—told to her by everyone who’s been voted out—is not the version we’ve been seeing, at least not since his tribe was just dancing around camp since they were so bored from winning.

Nearly every confessional with Ron is him talking about some duplicity, and it’s usually contrasted with him saying or doing the opposite. This could be framed as strategic game play, but it’s coming off as if Survivor wants us to imagine him a sociopath.

We did see him literally carry Julie after she stepped down off the immunity challenge, unable to walk, so that was nice. But when else have we seen him be “lovely,” to use Reem’s words?

Compare how he’s being presented with Rick Devens, who’s constantly on the wrong side of votes and even got voted out of the game, yet is getting a hero’s edit week after week, as if he’s just the most genius player.

The editing is infatuated with him! And that attention makes some sense: Devens is a performer, and as someone who’s well-practiced being in front of a camera, he’s using his talents. Also, the jury seems wildly amused by him, so he has fans outside of Survivor’s edit bays.

Unlike other players who get ignored, Devens gets little episodes inside episodes. Tonight, he was first a victim and then the hero. After Lauren told Aurora to go through Devens’ bag to see if he had an advantage, and Devens walked in during it, she said, “It’s allowed in the game.” He replied, “I know it’s allowed.”

Everyone was against him—even the person pretending to be his friend (Ron, of course).

But Rick did find an actual immunity idol clue, learning it was hidden at camp in a tree. He talked himself out of getting it while everyone could see him, and instead retrieved it when the rest of the tribe was sleeping. That scene that was quite dramatic: The shelter was attached to the tree he was climbing, so it kept making noise and waking people up. But Rick Devens succeeded. “They searched my bag too soon,” he laughed.

His performance at Tribal Council was also quite a moment: He first played the expired advantage Ron gave him (an attempt to win Devens over after Devens was once again left in the dark about a vote last week), and seemed to know that it was worthless.

In what seemed quite planned and rehearsed, Devens then said, “Ron and Julie, you are villains. I was already going home. You just wanted to make me look stupid? So my kids think I’m an idiot?” He walked back to his seat, and then perked up: “Except you’ve proven time and time again that you’re untrustworthy and disloyal.”

That’s when he played his idol, nullifying votes against him and sending Ron home.

But guess whose idea voting out Ron was? Not Rick Devens!

Devens was once again completely disconnected from every other person’s plan: He voted for Aurora, who Ron told him to vote for. Everyone else split votes between Rick and Ron.

Although they didn’t put on a performance at Tribal Councl, this was Lauren and Victoria’s plan. It was augmented (unnecessarily, it turned out) by Aurora giving her extra vote to Gavin—the only person who could certainly revote in the event of a tie.

It was a smart and strong plan, but the showboating at Tribal got more attention than the strategy that actually took Ron out.

While I was once entertained by The Rick Show, it’s getting as tiresome as the Jeff Probst Show: Loved Ones Visit Edition.

I will actually skip my usual complaints about the Survivor loved ones visit, which I have detailed before, and also not dwell on the weirdly disturbing way in which Jeff Probst says “love,” because I am very happy about the reward challenge—and not just because I absolutely laughed out loud when Probst said to Ron, “Let’s see who married you.”

I was just so, so excited that the loved ones got to do something other than fly to Fiji to have their interaction with their loved ones narrated by Probst.

There was very little time in this episode—the usual lack of opening credits, of course, but not even footage of the cast walking into the immunity challenge, just an abrupt beginning—so the actual reward didn’t get much time to spend with Ron and his husband, Gavin and his wife, and Julie and her husband.

It did have time to remind us that Ron’s game involves duplicity, though, as he talked to his husband about his game play, and received encouragement to keep playing that way. That’s the attention the show gave, while the attention it gave to Gavin focused on the newness of his marriage, not his game play.

Even Probst’s joke about who’d marry Ron was essentially sand kicked in Ron’s face; even if that wasn’t a joke, in the context of all the other Ron-is-evil moments, that’s what it came across like to me. Is this just Survivor’s version of the evil gay person trope that pops up in fiction?

Or maybe it was just setting up the reason for his exit. But it also was just another reminder of the way this season is giving bizarrely lopsided—and, in Ron’s case, like so many others, one-note—attention to certain members of its cast.