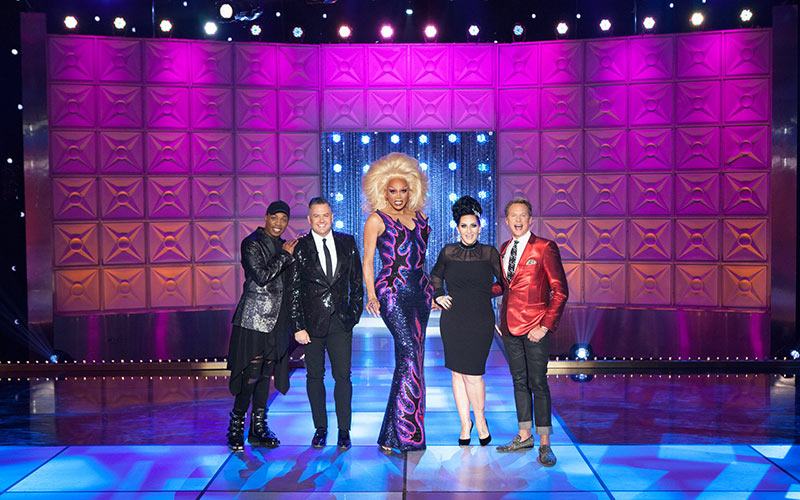 Two hit cable reality competitions, Guy’s Grocery Games on Food Network and RuPaul’s Drag Race on VH1 have something in common with each other—and with CBS’ Big Brother: the same set designer.

Scott Storey has designed sets for dozens of reality shows and live broadcasts, from The Surreal Life to America’s Funniest Home Videos. I’ll have a detailed profile of him and his work on Big Brother coming up in June, but for now, as Drag Race comes to an end, here’s are some behind-the-scenes details about the well-known sets for those two cable shows.

“For season two, they brought in me to design it, and they brought in a lighting director—and they also brought in a video engineer,” Storey said. (The lack of such craftspeople on season one was very apparent; in my review of the first season in 2009, I wrote “the series looked like crap, too bright and too blurry.”)

Scott told me that Ru “was so sweet” and working on Drag Race “was loads of fun to do.” Many elements of his design stuck around (“they used that same set until, like, last season,” he said).

His changes from season one and contributions included widening the runway. “Season one, it was only four feet wide, and the girls couldn’t walk down it,” he said.

The familiar backdrop behind the runway, which has a pattern of three-dimensional, four-pointed stars with a circle in the center? “Those are plastic ceiling tiles,” Scott told me. “They cost like $4 a piece—they’re cheap, cheap, cheap. They’re white and they’re lit to be pink.”

The wall of lights that’s directly behind the runway entrance, with lots of light bulbs, is a rental—and was also used on Celebrity Big Brother season one. For its use on CBS, “I changed the light bulbs out—now they’re all LED,” he said.

In its early years, Drag Race was on Logo and was very low-budget, and that’s still evident in the set today. The columns on the left side of the runway are not repeated on the right-hand side, because there wasn’t enough money to create a mirror image. As he designed the set, Scott said, “Let’s pick an angle [to film from] and go with it.”

The other major space, besides the runway, is the workroom. (The backstage space used for Untucked, once nicknamed the “Interior Illusions lounge,” was actually product placement, named after a company that presumably furnished the space; it wasn’t designed by Scott.)

Scott’s design for the workroom was inspired by a literal “pit stop—it’s a garage. I got these pink work boxes, which are mechanic work boxes, but they’re in hot pink,” he said. “So there’s all that automative concept behind it. It’s really subtle; nobody would see it if you’re looking at it. Everything was from a mechanic’s shop: pink row boxes, workstations that were mechanic workstations, checkered flags.”

Filming for scenes in the workroom were “evenly lit; it was being shot all around. We did do makeup mirrors, with the cameras behind the mirrors, and that was stuff they did at Big Brother.”

Yep, the camera shots from behind the mirrors on Drag Race were inspired by Big Brother, which films most things in the house from behind mirrored panels.

Guy’s Grocery Games’ Flavortown Market: a functional grocery store, not at all like Supermarket Sweep’s

Supermarket Sweet was one of the many game shows I watched as a kid, and I think it was mostly because of the fantasy of running around a grocery store and grabbing anything and everything.

But Scott Storey—who worked on the show when he was an “infant,” he joked—told me that it was not a pleasant shopping experience, and that’s because the grocery store was not functional. Those giant packages of meat that people would grab? I will never see them the same way again.

“I’ll tell you a horrible story about Supermarket Sweep,” Scott said. “Unlike Guy’s Grocery Games, it wasn’t a real working grocery store, but it was stocked. Buying fake food is really expensive. Buying fake meat was too expensive. So the production company would just buy real meat. It would sit there, unrefrigerated, for a week, and then after taping they would just throw it all away. It was the most rank, disgusting—the contestants would always grab it, because it’s a roast, it’s $24! And it was like rotting flesh.”

“Everything was just rotten, because there’s no refrigeration. It’s just scenery,” he added.

Nothing in the store on Guy Fieri’s Food Network competition Guy’s Grocery Games is scenery. For its first season, the series filmed in an actual grocery store: Fields Market in West Hills, California, a city northwest of Los Angeles.

Inside that warehouse, a 15,000 square foot, fully-operational grocery store was built by Scott and his team. “It takes a year to build a grocery store, and I had four weeks,” he said. When he talked to vendors, “They were like, It can’t be done.”

Among the complications: the building “had no gas, so we had to have gas run to it, which is really hard to do when you have a week. We finally got the gas run and we fired it all up, and the gas [company] called and said, you’re dipping the gas pressure in the neighborhood. They had to fix something.”

Now that Flavortown Market is operational and appears on television regularly, “Nobody realizes it’s not a grocery store. A lot of people think it’s a real grocery store,” Scott said. “I think it looks a little like a set.” (The only part that looks like a set to me is the front entrance; when contestants exit, they’re very clearly leaving into a faux parking lot, not walking into a full parking lot bathed in natural light.)

Food Network says the store is “stocked with more than 20,000 items,” including 241 produce options, 67 types of meat, and “442 pounds of seafood each week.” It “has a staff that orders the goods and stocks the shelves.”

Everything has a barcode and can be scanned at the checkout for real. “All the food is barcoded in; everything works,” Scott told me. “All the vendors were just blown away.”

“One day, a guy doing potato chip delivery shows up. He’s like, I’m here to deliver a thousand bags of potato chips. We open the door, and he sees the back of the set: it’s a wooden wall. And then we walk through that, and he’s like, Oh my god! What is this? It’s a grocery store. He’s like, But no one will shop here. There’s no parking.”

Although it is a functional store, it differs from real grocery stores in several ways, and not just because it’s closed to the public. The aisles are wider, to allow for carts and cameras, and “there’s no pet food section, there’s no baby care section,” Scott said. Of course, they don’t need those items on a cooking show.

You might also notice that there are horizontal lights attached to the shelves, directly beneath the top shelf. That’s “because the contestants stand looking at the shelves, you can’t light them, so we built lighting into all the shelves,” Scott told me.

Along with a slideshow that has close-up images of various sections, Food Network shares this about how the set is maintained:

“Every day the store team examines the aisles to determine what items need replenishing or replacement, starting with the produce section, which inevitably will need to be refreshed. The store team’s most-important job is making sure the quality of the food is at the highest standard.”

“Monday morning is a race through the aisles for the store team to get the market up and ready for the competition. Three hours are allotted for restocking and refreshing all sections, including produce, dairy, meat, seafood and the bakery counter.”

At the end of a television season, non-perishable items stay in the store to be used for future seasons.

Any fresh food—produce, meat, bread, seafood, et cetera—gets donated to charities, schools, and even to farms to be used as feed for animals. You can watch the crew pack up all donations in this video, which says that about 30,000 pounds are donated every season.

And if you want to see Flavortown Market under construction, Scott Storey has behind-the-scenes photos on his website.