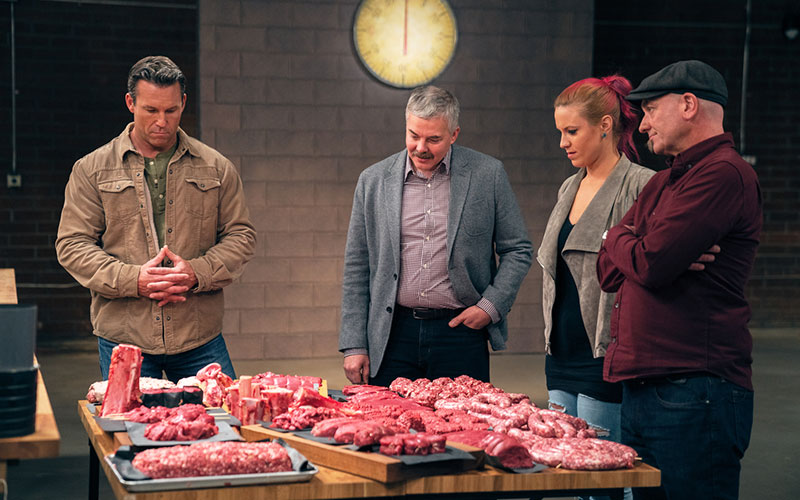 Four dead pigs hang upside down by their legs inside a walk-in cooler, and four contestants approach them with massive cleavers. They start hacking at the groin, aiming to split the spine down the center to hack the pig in half.

There is a bit of cooking, just to see how a cut of meat works on a grill, but mostly it’s just cutting: different animals, different tools, different goals, but still cutting lots and lots of meat. (Long before anyone pierces flesh with a knife, we’re told that the meat is donated to animal rescue organizations.)

I’m a vegetarian, and I’m also a gigantic baby about watching certain kinds of graphic violence on television and in movies. But I was fine watching The Butcher. If you can walk past a meat case in a grocery store, this probably won’t bug you. It’s significantly less gross than an average episode of American Horror Story, with the bonus of being far more coherent.

Actually, there’s more information flying around than hunks of bloody meat and dead flesh. If butchery is new to you, even if you devour meat with abandon, the show is ready to teach: with graphics, explanations from the judges, and comments from the contestants.

While the butchers work, the judges comment and critique, and even offer helpful take-away advice for people who might not have dead pigs hanging in their fridges. They dissect—in words—the various cuts of meat, the parts of the animal’s musculature, and why butchers prepare a cut of meat in a certain way (tying it, scoring it).

Judging is a combination of subjective and objective decisions. In the first round of the one episode History provided to TV critics, the contestants are judged based on the number of cuts of meat they make, though the judges can reject poorly butchered pieces.

The second round was entirely objective: the remaining contestants had to deliver five filets that are exactly six ounces, without being able to see a scale.

The final challenge, named “Meet the Monster” (or is that “Meat the Monster”?), involves butchering something they’ve never butchered before, and trying to get much usable meat with the fewest cuts. That was converted, somewhat mysteriously, into a dollar amount, though the judges were also discarding certain cuts like they did on the first challenge.

If you’re still concerned about why a TV show doesn’t seem to fit with its network’s title, you’ll feel comforted by The Butcher and its brief history lessons.

Those are delivered by Colby Donaldson, who previously hosted Top Shot. This show doesn’t give him as much to do—just the way he said “Top Shot” should have won him an Emmy—though with his signature crisp Texan intonation, he has fun with lines like, “It is time to split your swine.”

There’s also fun banter with the judges, including one accidental joke which starts when he admits he doesn’t understand what one contestant is doing, and reaches for a familiar reference. I want more interplay like that, and just more personality—puns, or humor, or anything to cut through what otherwise is a pretty ordinary cut off the reality TV carcass.

What surprised me the most was when, in the premiere, one contestant says, “It really makes me proud to see this younger generation continuing to carry on this art form that I’ve made a career out of.”

I’ve never thought of butchering animals as an art form, and multiple people make references as if it’s in danger of dying, perhaps because of the industrialization of our food supply that has the effect of separating us the source of our food while also treating the animals like shit.

There’s a significant degree of respect and care that these butchers show—I mean, as much respect as you can show to something that was killed for you.

Even as someone who finds eating animals to be unnecessary, I appreciated The Butcher for introducing me to a craft I didn’t think of as a craft, and for its reminder that it’s possible to treat our food with respect, even as we hack it apart with a giant cleaver.