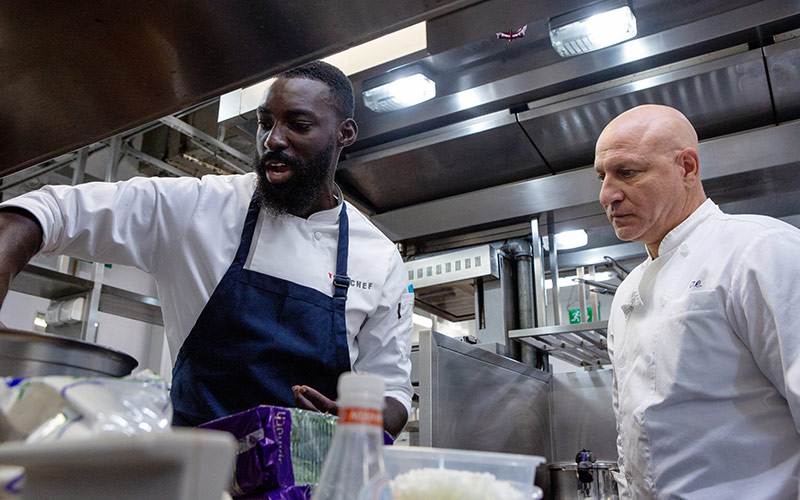 Eric Adjepong cooks and talks to Tom Colicchio during part one of the Top Chef season 16 finale in Macau. (Photo by Carmo Correia/Bravo)

It’s Memorial Day in the United States, a day on which we remember people who’ve served their country.

It’s also become the unofficial start of summer, which means that for many of us, it’s a day off of work—at the beach, on vacation. And for others, it’s a day of work because other people are vacationing.

Whether you need beach reading or something to pass the time at work today or this week, this curated list of stories highlights the best and most insightful journalism about reality television that I’ve come across recently.

And if you come across a must-read story, please share it with me (self-links are fine!).

Eric Adjepong didn’t get to finish his Top Chef finale meal, thanks to that dumb twist. But he prepared the whole meal for—and discussed it with—The Washington Post‘s Food Lab. (Washington Post)

On Survivor Cook Islands, Jonathan Penner was visited by his wife, the film director Stacy Title, and they competed together in a challenge. Today, she’s directing her final film and navigating ALS, which took away her ability to move or even talk within the span of a year. The two are profiled—and are incredibly honest and vulnerable—in this story. (Vulture)

Neil deGrasse Tyson’s shows Cosmos and StarTalk will return to NatGeo after an investigation into his sexual misconduct, which the network concluded by saying “There will be no further comment.” That doesn’t exactly inspire confidence in a corporation investigating itself. (Slate)

The composers of Surviving R. Kelly and Leaving Neverland, Chad Hobson and Nathan Matthew David, discuss how they created music to accompany stories of abuse. (Variety)

How responsible are networks and producers for their cast members’ actions? Two storm chasers getting footage for a Weather Channel reality show ran a stop sign at 70 miles per hour, killing themselves and another man. The network is now being sued, and the lawsuit claimed it “encouraged the pair’s recklessness.” (New York Times)

Fixer Upper stars Chip and Joanna Gaines will be getting their own network, that’s how popular their work is—but I was fascinated by this deep dive into their effect (positive and negative) on Waco, Texas. (BuzzFeed)

The Kardashians offer “a master class in the art of monetizing influence.”  It’s a class you may not want to take, but it’s fascinating to read about. (New York Times)

The Israeli reality show 2025 takes place in a fake town, and the cast has to decide how to spend money, and are constantly ranked—and eliminated—based on their net worth. (Fast Company)

Pieces that made me think

I wish this piece went deeper, but I love its argument that Guy Fieri’s “Diners, Drive-Ins and Dives is actually a show about two things that have truly made America great: individual entrepreneurship and immigration.” (Daily Beast)

This satirical story about The Bachelorette is so, so wrong—but also, those fake quotes are so spot-on, echoing the way the show markets and defends itself. (The Onion)

For those of us who love the early seasons of The Real World, this is a fascinating argument about precisely when the show changed into the mess it became. Rebecca Schuman argues that “the show’s transition from unscripted soap opera to unapologetic grotesque” happened with Boston. Boston! I adore that season, and so I’m not quite sure I agree, but I still love this deep dive into The Real World. (Longreads)