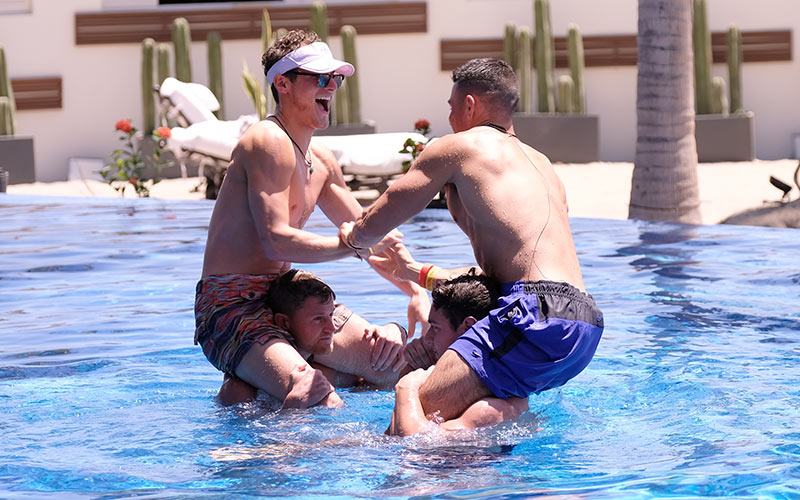 Tyler, David, Bobby, and Hans mount each other and splash around on the Paradise Hotel premiere (Photo by Ray Mickshaw/ FOX)

In her 2003 review of the first season of Fox’s Paradise Hotel, TV critic Heather Havrilesky called the cast “pea-brained flesh monkeys” and “mildly attractive morons” who were starring in “two scintillating hours of tragicomedy per week.”

As flawless and accurate as those descriptions were, it was her lead paragraph that struck me the most when I read it earlier tonight. It turned out to be incredibly prescient—and a perfect explanation for the challenge that the return of Paradise Hotel faces:

“While most normal, sane human beings loathe reality TV and see this as a low point in our cultural history, I feel lucky to bear witness to such a pivotal time in televised entertainment. Right now, we’re in that precious pocket between the invention of a new genre and the point at which that genre is standardized into bland uniformity. Soon, unpredictably awful reality TV will be a thing of the past, and those who pooh-poohed it will look back with nostalgia and longing, the way we now look back on discotheques, bad perms and Shaun Cassidy iron-on T-shirts. Sure, we thought ‘Herbie, the Love Bug’ was corny when we were little kids, but who doesn’t long for the days when the hit movie of the summer starred a compact car?”

Since the Fox series premiered in 2003—16 years ago! Children born then are now operating motor vehicles!—its format has been copied (by Bachelor in Paradise and Love Island), and Big Brother embraced an identity as summer trash in swimsuits. MTV has basically rebuilt its network on the pile of STD tests.

That leaves Paradise Hotel season three with one weapon: being live, and having literal viewers join the cast and shake-up the status quo.

That won’t come for a while, but the show made a push to involve viewers by having a vote at the end of the hour for a new guest to join: the guys picked one new guy to join them, and viewers will pick another.

The show was trending on Twitter during its two hours, but it also paid a bunch of people to tweet about it, so that’s not a good measure of anything at this point.

Paradise Hotel’s guests insist they’re there for love, but please

The game is simple: there’s always an uneven number of men and women, and everyone pairs off. Whoever doesn’t get paired up leaves, and then a new person shows up.

The first single person, MariaElena, who was single because of a random draw, knew the deal: “I’m not going to be single for long because I’m the hottest girl here right now. I know that the guys have their eyes on me.”

She’s right, because there’s basically nothing to Paradise Hotel otherwise. It’s purposefully empty and shallow: a bunch of straight people show up and pair off immediately.

Okay, sure, there was a lot of insistence that the cast is here to find actual love, and not to win, you know, the cash prize.

Brittany, crying, said in an interview, “Love is what I came here for, and with love comes the possibility of getting hurt, and that’s a very scary idea.”

I’d argue that searching for love on this show is scarier. It’s almost odd that it’d be much more honest to just admit they’re here for five weeks of free drinks and hook-ups in front of surveillance cameras.

At breakfast one morning, Bobby asked the other men, “Anybody get it in last night?” He was indeed talking about penises in vaginas, and at least he was honest about his expectations for what Paradise Hotel is for.

So was Deion Sanders’ daughter Deiondra, who introduced herself by telling us, “No one is getting this million dollar pussy.” That’s true: She was the first out, with her guy Carlos dumping her after being forced to choose between her and MariaElena.

These kinds of shows have delivered so many straight people play-acting their well-worn gender roles that none of this felt new or interesting, just flat and dumb. And that’s fine, if that’s what you’re here for.

Paradise Hotel’s only attempt to develop its cast as more than one-dimensional lust machines were throwaway things like Hans Wiener, the actual name of an actual model, sharing Chippy, his stuffed animal. But why does he have it? And did anyone even look at the stuffed animal as he climbed into his bed wearing just tight boxers and flung his legs up in the air?

I don’t know if they’re able to develop themselves as characters: Carlos could only describe the woman he chose, MariaElena, as “a beautiful woman” with whom he “shared an amazing date.”

Here are some other superficial things: The hotel is beautiful (Paradise Hotel is being filmed at Rancho de Costa in Baja Sur, Mexico), though the visuals are jarring as the show switches between traditional cameras and surveillance camera footage, which always looks different and never quite frames things well.

Also jarring: the switch between a British narrator and host Kristin Cavallari, who also sometimes narrates.

Kristin was mostly fine with the contestants and hosting duties, though she approached Julie Chen levels of awkwardness in her stand-up introductions. The show invited the comparison by having the cast (“guests”) sit in a living room and interact with her via TV, live on our TVs.

Still, Paradise Hotel is no Big Brother, though: no challenges; no HOH; no dumb, unfair twists (so far! fingers crossed!), none of that pesky thinking getting in the way of the showmances. Bachelor in Paradise continues an ongoing storyline with already-known cast members, but Paradise Hotel has none of that baggage, just a bunch of hot bodies here for our entertainment.