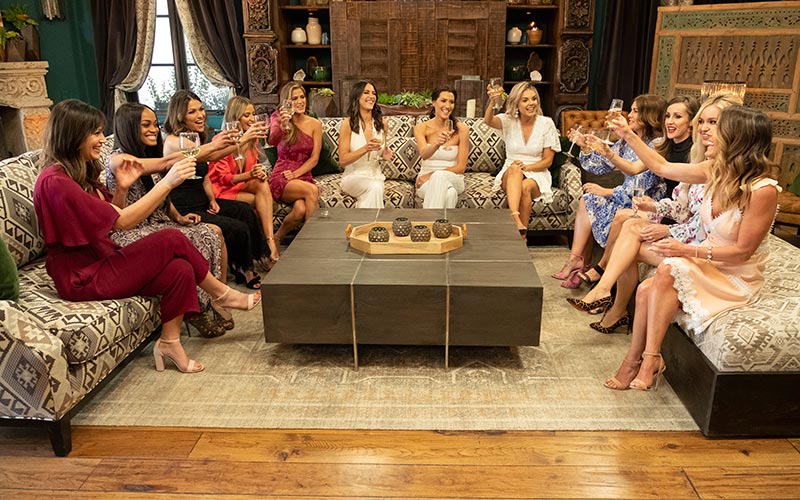 12 of the 15 Bachelorette stars reunited at the franchise's iconic mansion. (Photo by John Fleenor/ABC)

“To everybody together—it’s really special,” Chris Harrison said when the stars of The Bachelorette finally reunited during Monday night’s reunion. He later said it was a “controversial” premise “for the first three of you.”

Except two of those three weren’t even there: season two star Meredith Phillips and season three star Jen Schefft were both missing.

When the show finally got through its filler—including significant time with the “bad boys” of the franchise—the actual reunion lasted about 10 minutes of a two-hour special.

But what else would we expect from the franchise that consistently lies about something as trivial as when its star is going to leap over a fence and run away from the production?

Chris Harrison didn’t acknowledge that two of those three weren’t even standing there, though he did describe them as his property: “It’s good to have my girls back.” He also took credit for creating a “sisterhood,” a story that definitely should be turned into a book and movie: Sisterhood of the Hosting Pantryman.

Both Chris and Trista mentioned that there were 12 Bachelorette stars there, and Hannah’s absence was because she is currently filming The Bachelorette season 15.

So where were the other two?

And does it have anything to do with the fact that, one year ago, Meredith Phillips said she was drugged and sexually assaulted during season two by a crew member?

Last week, Chris Harrison told ET that it was all about scheduling:

“Unfortunately Jen and Meredith couldn’t be there because we had to settle on a date. At the end of the day, we had to shoot this thing. So, we just picked a day where we could get as many as we possibly could, but unfortunately schedules, vacations, was one of them, just couldn’t be changed. And we just had to pull the trigger and do this thing.”

That’s a logical answer. After all, gathering 14 people together is difficult.

But Steve Carbone, aka Reality Steve, on whose podcast Meredith told her story of being assaulted, tweeted the contents of a text message from Meredith that said she was never invited.

Reality Steve says Meredith texted this to him:

“No, I was never contacted or spoke to anyone. I didn’t even know the show was happening.”

While that is second-hand information, Steve is obviously connected to Meredith. And that would mean the person who one year ago said disclosed that she was assaulted by someone hired by the production not only wasn’t invited back, but didn’t even know the reunion was happening.

In his interview with ET, Chris Harrison said:

“Jen and Meredith are represented, they’re celebrated in this thing, we love them very much and they’re a part of our family and this sisterhood, but they just couldn’t join us.”

That very last part could be true: It is difficult to join if you haven’t been invited.