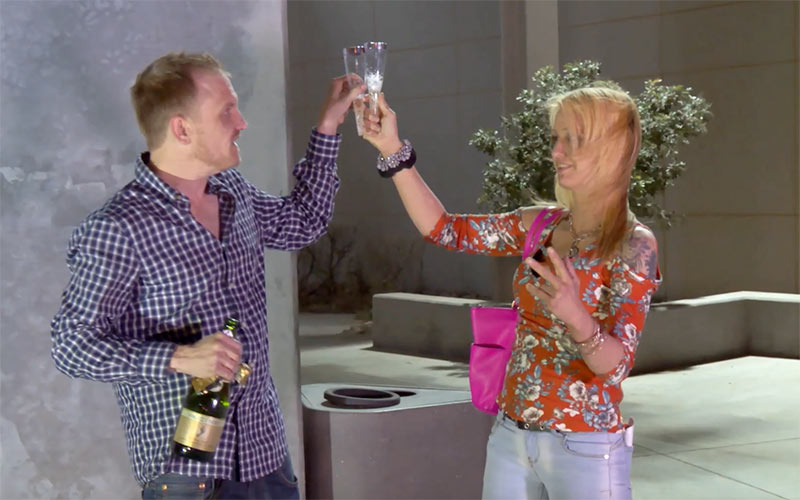 In its second season earlier this year, WE tv’s reality show Love After Lockup has done something few shows do: kept growing its audience. The series, which follows people who are in relationships with incarcerated people, did so well that WE tv ordered an additional 10 episodes for its second season.

So it makes sense that a brand-new spin-off is on the way—one that keeps the focus on five of the couples who are now navigating their relationships after one of them leaves prison.

WE tv said that, during its first season, the show was “the fastest-growing new cable reality series for 2018.”

Season two did even better. It aired from January to March, and averaged 1.17 million viewers per episode, compared to 663,000 viewers for the first. That’s a strong hit for any cable network.

Between the premiere and finale of the second season, viewers more than doubled.

To get specific: In live plus three ratings, meaning everyone who watched within three days of a broadcast, the show grew its audience (people ages 25 to 54) by 85 percent compared to season one, and 67 percent among all people who watched live or the same day. There was similar growth in WEtv’s key demos: women 18 to 49 (up 78 percent compared to season one) and women 25 to 54 (up 82 percent.)

That’s impressive, especially for what comes across as a very low-budget, simple show: just cameras following people. Sometimes their conversations can feel forced and awkward, or scenes seem like they were set up to capture a certain conversation—that’s not unlike The Real Housewives, just far less slick.

Although it may seem like ordinary reality show relationship drama, Love After Lockup is also calling attention to how normal and ordinary it is for people to be incarcerated, and how difficult the transition out of prison can be.

There’s been “a 500% increase over the last 40 years” of incarceration and it’s because of “Changes in law and policy, not changes in crime rates,” and in fact, “Crime rates have declined substantially since the early 1990s,” according to The Sentencing Project.

Perhaps unsurprisingly, we actually think there’s a lot more crime than there is.

Of course, Love After Lockup focuses its attention on people, not on examining the system.

The couples Love After Lockup’s spin off will follow

In a press release announcing the spin-off, WE tv’s Marc Juris said, “our viewers can’t get enough of Love After Lockup. There was an outpouring of interest from fans who were eager to keep following these unforgettable couples, making it an easy decision to expand this burgeoning franchise with an all-new series.”

The show will follow these five couples from seasons one and two:

“…follows five returning couples who fans have grown to know and love—or love to hate—as they face parole restrictions, temptation, and turbulence in their lives outside of prison walls. Will these troubled lovebirds break old habits with the support of their loved ones? Or will they break the rules and land back in the clink?

Throughout the eight episodes of Love After Lockup: Life After Lockup, fan-favorites Clint and Tracie; Marcelino and Brittany; Megan, Michael, and Sarah; Scott and Lizzie; and Andrea and Lamar will face new challenges and tackle many firsts in their new lives, from raising children to buying first homes to finding work and staying sober. These committed couples are doing it all while living under the restrictions of parole and dealing with the stresses and occasional turmoil of a new relationship. Now that these former inmates have left prison, will they be able to survive the real world and stay out of prison for good?”

Recommended for you: How Love After Lockup became a reality TV show