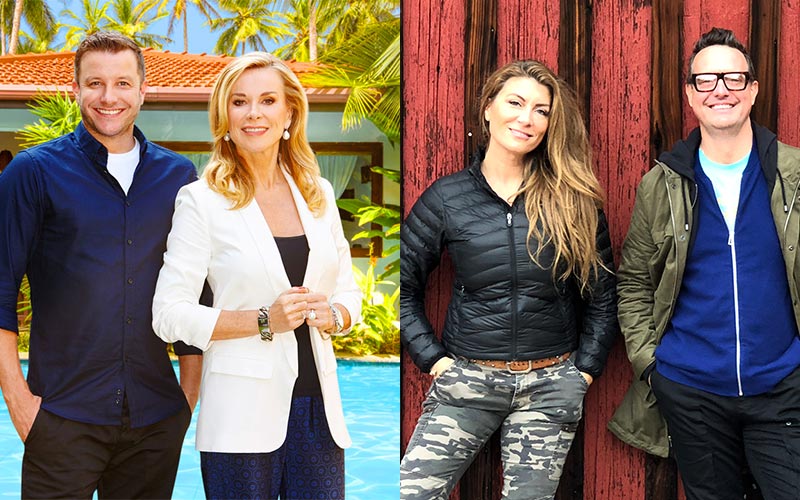 Instant Hotel and Stay Here are both reality shows that take place primarily in home stay rentals like AirBNBs, and whose episodes offer buoyant overviews of cities, towns, and properties that would be delightful to visit.

I highly recommend each show—both are streaming on Netflix in the U.S.—though they could not be more different.

One is an Australian competition series on which some absolutely surprising game play and villainy emerges.

The other is mostly about spectacular redesigns thanks to a designer we know well from Trading Spaces and other shows.

At first, Instant Hotel seems like it’s a breezy look at some of Australia’s home rental options, a kind of living version of browsing AirBNB or VRBO.

But that’s just a costume that a dramatic, sometimes cutthroat, always catty reality competition has put on to try to soften its sharp edges.

In each episode, people who rent their homes travel around Australia and stay in each other’s places, and judge it. And I mean, they judge it: for nearly every moment they’re staying there, and then formally, for the competition.

The cast—wow, are they something else. They’re easy to like and watch, but so many of them compete to see who can be the most catty, the most vicious, the most judgmental.

In every episode, the owners introduce their place, and then go off to a hotel, and the rest of the teams stay for one night. They spend most of their time identifying and complaining about every fault they can find.

The couples (friends, siblings, married couples, parents and their adult children) argue with each other about who gets which bedroom, and then they settle in for an evening of criticism. Some channel the informed and helpful critiques of Tim Gunn, others resemble the pointless shouting of Fox-ified Gordon Ramsay.

At the end of the stay, each couple scores the place and experience on a 1-10 scale. They’re supposed to consider all kinds of criteria, including the quality of sleep, the value for the price, and local attractions. Despite that objective framework, it all gets smashed into one very subjective number.

The host reads the couples’ comments and scores out loud in front of the couple, so they get to face their critics. The hosts also score their guests, just like people do on AirBNB and other rental sites.

Balancing things out a little is an expert judge, Juliet Ashworth, who scores the place on the same 1 to 10 scale. She tours the property with host Luke Jacobz while the rest of the guests are doing some kind of local activity that the hosts picked out. Juliet is exacting but fair, and her critiques often align with the competitors’ comments.

The first season aired on Seven Network in 2017, and season two aired earlier this year. Season one—which is on Netflix, and thus is the only one I’ve seen—has 10 properties split into two groups, so five couples and five visits. The couple/property with the highest score in each round goes on to the two-episode finale, after first making some improvements to address their fellow contestants’ complaints.

The homes and apartments (and houseboats, and tents) are often charming and sometimes creative, and Instant Hotel throws in a bit of travelogue with introductions to different parts of Australia. Then the cast comes in and spends time tearing down the locations, too, because why stop at criticizing the linens or decor when you can shit upon an entire city?

The competition spurs some outrageous behavior that shocked me in the way that Richard Hatch’s strategy shocked me in season one of Survivor. It comes across as pure evil villainy but may just have been smart game play. That extends to the finale, when, of course, the producers brought back some of the most villainous teams to become a jury.

Don’t confuse this series for a truly strategy-oriented show, however; the rules are loose, and contestants adjust their scores on the fly based on how others score them, which seems a little unfair.

At times I found the show wildly entertaining, and at others the quibbling, nit-picking and pettiness became overwhelming.

Still, Babe and Bondi, Brent and Leroy, and Mikey and Shay are some of the most indelible cast members reality TV has given us, and there’s also a lot of difference in the casts, from siblings Bec and Tristan to high school sweethearts Mark and Jannine.

(One of the on-screen villains did a Reddit AMA you should read after watching, because there’s some insight into what happened off-camera—and what happened after the show aired.)

What really kept me hooked, with intense fascination, was watching certain couples tear other properties apart, and then getting to see their property. The most critical people tended to have places that may or may not live up to the standards that they’ve held other people and properties to.

How do people projectile vomit criticism all over the room and yet get offended by a tiny burp from someone else? Are they just noticing the things they dislike about their own spaces?

The show doesn’t engage with this in any way, of course, but it’s insight into how easy it is for us to point fingers and how tough it is to even see a finger. And yes, I am talking about myself here.

Before she hosted a Bravo competition, but after she returned on Trading Spaces, Genevieve Gorder hosted and starred in another new show on Netflix: Stay Here.

Between the title and the weak description (“Designer Genevieve Gorder and real estate expert Peter Lorimer show property owners how to turn their short-term rentals into moneymaking showstoppers”), it took me a while to realize that this fits nicely into one of my favorite reality TV subgenres: the business makeover show. But it barely resembles cable shows like Bar Rescue or Restaurant Impossible.

Genevieve and Peter Lorimer, a former record producer turned real estate agent, have terrific chemistry, and give an overview of the city before arriving at the property. They meet the owner and tour that person’s property, identifying potential issues, and also identifying its potential, as a space and in terms of how much revenue it can generate.

Then they get to work. It’s clear that a lot of the work happens off-camera, both during pre-production and as the episode unfolds. There are flashes of the construction and redesign, but this is not a show about process.

It delivers more substance than the absolutely delightful Get a Room with Carson and Thom, but we’re mostly here for a spectacular reveal.

The episodes and the transformation are quick, but they are massive, significant transformations, and Gen’s designs are exceptional: rich, clean designs that sparkle with life, even before people check in to stay there.

The best part is that no one yells at anyone; there’s no turning someone into a villain just to get a story beat and an act break; there’s no forcing a last-minute problem just to get a dramatic conclusion. Everyone is good-natured and charming, and even when property owners are skeptical about changes, they roll with it.

Eight episodes weren’t enough; I want to travel the country with Gen and Peter. I’d also like a second season so I can start a short-term rental just to have Gen come in and design it for me and have Netflix pay for it. Is that too much to ask?