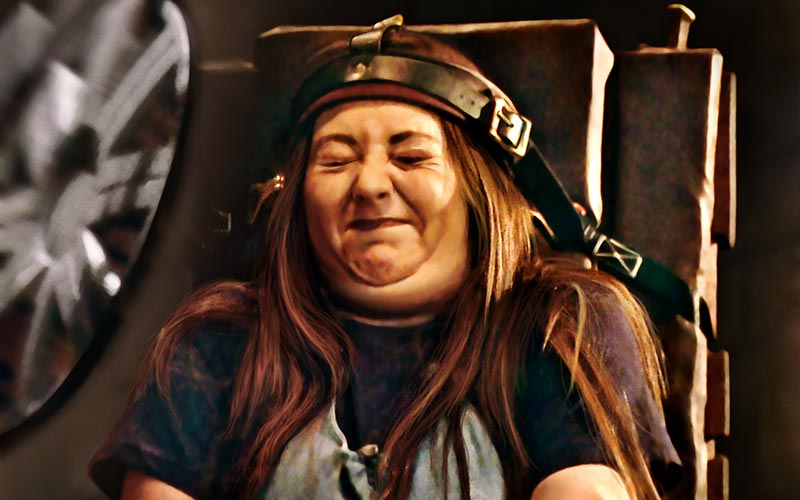 An image from Netflix's art for Flinch, a game show that punishes flinching with pain.

Today Netflix’s attempt to remake all of reality television in its own image moves into game shows with Flinch. But it has as little in common with a game show as the excellent Netflix reality show Dating Around had with The Bachelor: practically nothing.

The point of Flinch is not to use skill to win money, because there is no prize. But there is a whole lot of stupidity masquerading as a format.

The only skill on display are the contestants’ ability to fight their own bodies’ automatic responses. When someone doesn’t flinch, that can be impressive, though is it a desirable skill to be able to not move at all when a giant balloon pops right next to your face, or a washing machine flies through the air directly at your head?

In each of the 10 episodes, eight contestants participate in three challenges, all filmed in barns on a Northern Ireland farm, and constructed out of materials that appear to be homemade, apparently by a psychopath. The stagehands dress the part, and would easily be at home in a horror movie.

The challenges themselves are like the contraptions from Saw, except instead of gruesome, splattery death, they produce some kind of punishment that ranges from physical pain (electric shock, produce dropped on their heads) to annoyance (whipped cream in their faces).

Flinch is unconcerned with its contestants as anything other than fodder for its contraptions, though they get brief introductions. They’re simply meat puppets for the machines.

A trio of comedians—Desiree Burch, Seann Walsh, and Lloyd Griffith—watches the action and comments, though they don’t add much. Since there are no rules and no explanations of what’s about to happen, sometimes they guess and infer. But they mostly react alongside an audience that’s been brought in for the fun.

Before each challenge, each comedian randomly selects a contestant, and earns points every time that contestant flinches. At the end of three challenges, whichever comedian has the most points gets to experience some flinch torture for themselves. The contestants get to watch. I’d prefer consolation prizes.

The point, of course, is to watch a washing machine fly through the air and see how someone reacts. To see if being fired at by paint balls causes a person to move just enough to get an electric shock. To see what happens when someone is surprised by a loud noise or a jack-in-the-box popping up unexpectedly. To see if they can breathe in foul odors without moving.

There is a degree of cleverness in the design of the challenges, most of which feel new, although Flinch does reuse challenge formats and contraptions, like Survivor keeps reusing the basic idea of an endurance challenge that involves balancing and holding something. (If you’re curious about the behind-the-scenes of Flinch’s creation, the producers explain a lot in this Broadcast story.)

But there’s also a degree of unease with the way Flinch turns actual methods of torture into light comedy. Flinching can get you waterboarded (dunked backwards and upside down into filthy water, for one example) or electrocuted (with a cattle prod, or with wires connected to a car battery). The show loves rapid dunking and electrical shock.

With a TV-PG rating that says it “may not be suitable for all children,” it suggests that some children are part of the target audience, and I am sure Netflix will attract a younger audience here. Many of them, and many adults, will be amused. When people ignore the warning at the start of the show and try recreating these challenges on their own, Netflix may not be as amused.

Netflix calls this an “all action comedy game show with one simple rule: do not flinch.” But it lacks many of those things, like rules and action.

The “comedy” part is probably very personal, and I’m sure some people will find this to be a joy and a half, and they’ll burn through the episodes in an afternoon. I didn’t, really.

Slapstick comedy and shock humor work very well on me, and can leave me barely able to breathe, I’m laughing so hard. (Most recently, I fell apart watching this segment from At Home With Amy Sedaris; Amy subtly breaking character also made me laugh.)

But Flinch didn’t ever surprise me enough to get that kind of reaction; at most, there was a chuckle.

All of this is blessedly brief: episodes last from 20 to 25 minutes, with the challenges presented as montages, not eight contestants trying the same thing one after the other. Still, it can drag, especially when we’re waiting for something to happen.

ABC’s successful relaunch of classic game shows—which continues this summer with Card Sharks and Press Your Luck, the latter of which will be hosted by Elizabeth Banks—demonstrated that game shows can definitely be fueled by silly, ridiculous fun. But even a game heavy on double-entendre and reliant almost entirely on guessing, Match Game, had substance, such as witty banter and actual prizes.

There’s so little to Flinch that, if it were to flinch, I fear it’d just evaporate into dust.