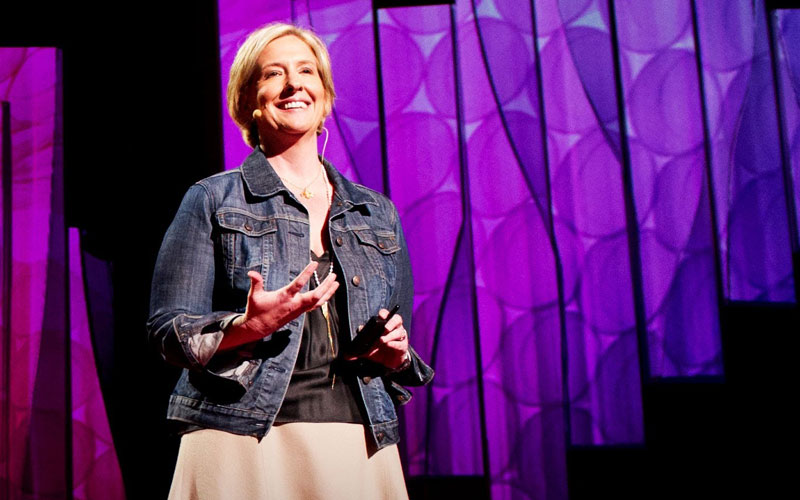 Brene Brown in her TED Talk about shame

Ever since I watched Brené Brown’s TEDx Talk on vulnerability, I’ve been a fan of her work. She has a way of not just speaking about fundamental issues in our culture, but also clearly and directly identifying my bullshit.

For one example, I frequently re-watch her explanation of empathy versus sympathy, because I’ve been that deer more often than I care to admit.

Brené now has a Netflix special, Brené Brown: The Call to Courage, which is basically Netflix doing what it does and remaking a thing so it can own the thing. But since it’s Brené sharing about her own experiences and research, it, too, is full of insight.

She talks in part about the reception to her breakout talk on vulnerability, and how cruel people were to her online.

One part that really rattled me, in a good way, comes when she’s talking about how “easier [it is] to cause pain than feel pain,” and says, “Stop working your shit out on other people.”

Does reality TV cause pain? What about watching it? Or critiquing and commenting about it? Is that just redirecting my shit toward the people who are going through shit on television?

A while ago, I came across this 2010 Houston Chronicle essay that Brené wrote, and I was somewhat taken aback by part of her argument, because she challenges her readers to think really critically about the genre of entertainment I spend so much of my life reporting on, critiquing, and championing.

Brené writes that “reality TV draws audiences by delivering performances that mirror the exact behaviors that we define as bullying.”

She does make a broader argument, though; this isn’t a simplistic condemnation of reality TV as the root of all evil. (And it’s similar to something Monica Lewinsky pointed out several years ago.)

That argument: “When it comes to managing conflict and difference, we’re not exactly modeling the behaviors that we want to see in our children.”

Here’s the part that really made me think:

“In a world that is plagued by war, economic hardship and pervasive self-doubt, we rage and humiliate to alleviate our own misery. It’s simply easier to attack and berate others or watch it happen on TV, than it is to risk having honest conversations about our struggles with worthiness. Why lean into our own feelings of scarcity and shame, when we can watch strangers get booed off stage or voted off the island? It feels good to watch others suffer.”

How true is this for me? Okay, very true! Early on in my reality TV-watching, when I was in high school, it was definitely more true than not. I did not want to have honest conversations with anyone; I wanted to point out others’ flaws. How much easier it was to mock a Real World cast member than to deal with my own issues!

But that was roughly 25 years ago, holy forking shirtballs.

Why am I still doing that? What’s the purpose? Is there a difference between critiquing someone’s behavior on a reality show, and critiquing the show itself as a work of popular culture? Is the latter more defensible?

This is something I’ve had in the back of my mind for years, and am now working on a book in part to help me think about it—in addition to sharing behind-the-scenes stories of my relationship to reality TV, my experiences with cast members and on sets (from a panic attack in an airport to being voted out of Survivor by Jeff Probst), and why I do what I do.

So there’s a lot to write about!

In the meantime, in case you haven’t seen Brené’s original TED Talk, it’s worth a watch.

You can also watch my TEDx Talk on “The Value of Reality TV,” which is mostly a lesson in making sure your sweater contrasts with the background.

But I highly recommend giving a couple minutes to watch this animated version of part of one of Brené’s lectures: