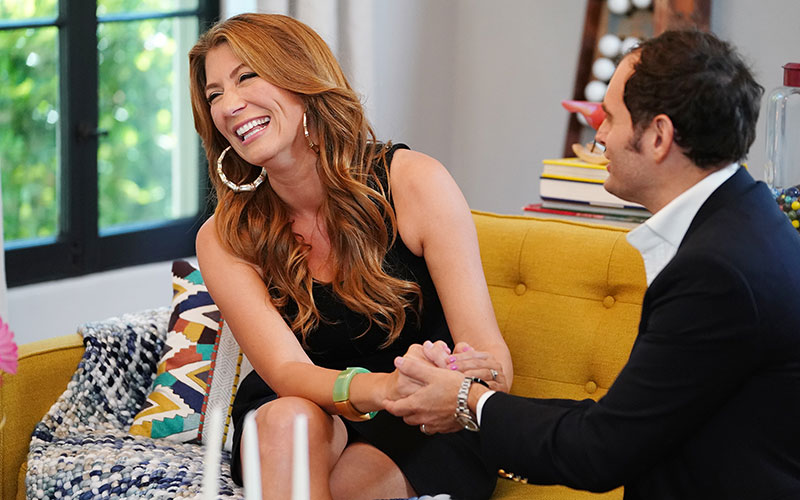 The difference is that Best Room Wins (Bravo, Wednesdays at 10) keeps a room’s owners around for the entire process. They aren’t exactly central to the process, but neither are the home-swapping couples on Trading Spaces.

That makes this new series much more about design, and also feels like a missed opportunity to use its greatest asset: Genevieve.

On each episode, two designers redo a room in a couple’s home in four days. Each episode uses a multi-million dollar house and its design style as its theme, and both rooms are done in that style.

The winning designer gets a feature spread in Elle Decor—oh wait, no, on ElleDecor.com. The competition is literally the title, but it’s the least interesting part. The designers yelling about the fact that they’re going to lose, but the stakes feel so, so low. Exposure on a Bravo reality seems more consequential and important, but I am also not a designer nor an ElleDecor.com visitor.

The reveal at the end of the first episode—the only one provided to critics for review—is flat, which may just be Genevieve getting used to the format. But I’m also not convinced the show uses her well.

Best Room Wins is the inverse of Get a Room with Carson and Thom: more design and less personality. I adored Get a Room entirely for Carson and Thom’s interaction with each other. The design and process were mostly afterthoughts, or at least not the central focus. Besides Carson’s comical side project, most of the work was done by a team, and off-camera.

On Best Room Wins, there’s a lot more attention on the design process, so if you’re here for the makeovers, there’s more for you. It’s anchored, however, by designers who change every week, since it’s a competition between them, so there isn’t a consistent point of view or approach.

Gen introduces their challenge and then disappears. it’s halfway through the episode until she shows up again, on day three of the design process. It’s there that she shines, with both her quips and the really strong advice she offers. Her pragmatic advice and nonchalant approach are enjoyable to watch and also useful: When one designer conceals plans from her homeowners, perhaps to create a bigger reveal moment, Gen’s like, Eh, just show them what you’ve got!

That makes her both the through line episode to episode, and also the strongest personality on the show. The first two designers have been edited to be more grating than genius, and thus I don’t need to see them again. Genevieve’s fellow judge, Elle Decor editor Whitney Robinson, is outshined by the first episode’s guest judge, Martyn Lawrence Bullard, in both confidence and wit.

One issue across Bravo’s design shows—Get a Room, Buying in Blind, and now Best Room Wins—is that the budgets feel fudged. The amount of money spent is somehow always a perfectly round numbers, which doesn’t feel realistic or truthful.

The credits list promotional consideration and a staff member in charge of trade-outs—i.e. product integration—but there’s no on-screen acknowledgement of that. So they’re getting some things for less and/or free, which either means the room would cost much more than $25,000 for an average person, or the room cost the show far less than $25,000 to produce, and the budget we see is the retail price. Either way, it’s not very transparent.

I appreciate Bravo’s attempts in this space, making the HGTV reality glossier and higher-end, anchored by strong personalities. But I’m also not sure there’s a clear idea about what these shows are for. The this-season-on trailer suggests there will be takeaways for average people like us; I saw none in the first episode.

Is this drama or design? Is this a win-at-all-costs competition or a collaboration with homeowners? Is it aspirational design or DIY?

My preference would be for personality with spectacular design and transformation as a backdrop, which basically just means I want Get a Room with Carson and Thom back, because it does that so well. Best Room Wins has some of the right pieces, especially with its host, but the room hasn’t quite come together yet.