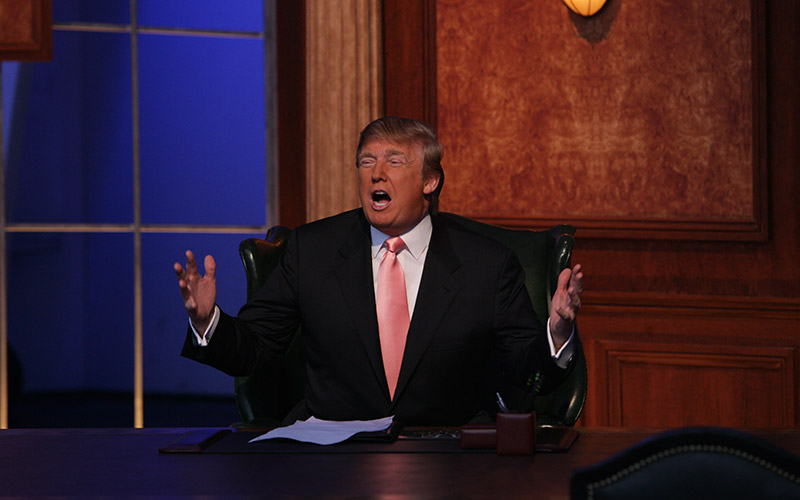 Donald Trump, before. (Photo via Tubi)

All 15 seasons of The Apprentice—the seven original seasons and the eight celebrity seasons, hosted by current president Donald Trump except for the last season, which was hosted by Arnold Schwarzenegger—are now available to watch online for free. The Martha Stewart season is not.

While season one of The Apprentice has been available on DVD, Celebrity Apprentice streamed on Hulu for a while, and bootleg versions of episodes and some seasons have popped up occasionally, the show’s archive hasn’t been this available before, whether to stream or to buy.

Who will want to watch it? Good question! But having the entire series publicly and easily available may be an invaluable resource for researchers, journalists, and perhaps even politicians.

Tubi TV announced that it “entered a content partnership deal with MGM Television to become the exclusive home for all 15 seasons of The Apprentice franchise.”

You may recall that MGM previously claimed that “Mark Burnett does not have the ability nor the right to release footage or other material from The Apprentice” and “[v]arious contractual and legal requirements also restrict MGM’s ability to release such material.”

That was in response to an Apprentice producer’s comment that “far worse” statements by then-candidate Donald Trump existed on tape. That saga has continued; Tom Arnold’s “reality” show’s entire premise was to find Apprentice tapes.

In a press release, MGM executive Chris Ottinger said, “We appreciate our partnership with Tubi, and we are excited to share our content with their audience.”

I’ve asked Tubi if Donald Trump is profiting from this licensing agreement, and will update when/if I hear back. MGM is an investor in Tubi, which called this a “partnership” and “unprecedented content deal” in its release.

Where to watch all of The Apprentice online

The collection of 15 seasons start season 1, episode 1, “Meet the Billionaire,” and are available on the web or on any of Tubi’s apps:

Tubi recently added the original seasons of The Bachelor and Bachelorette, and also streams other reality shows—and is promising that there’s more reality TV to come.

Its CEO, Farhad Massoudi, said in the release, “In our quest to democratize content and make more premium content accessible, we are making a big push into the reality television space. The Apprentice is our second big series announcement this month, and we will have more in the near future.”