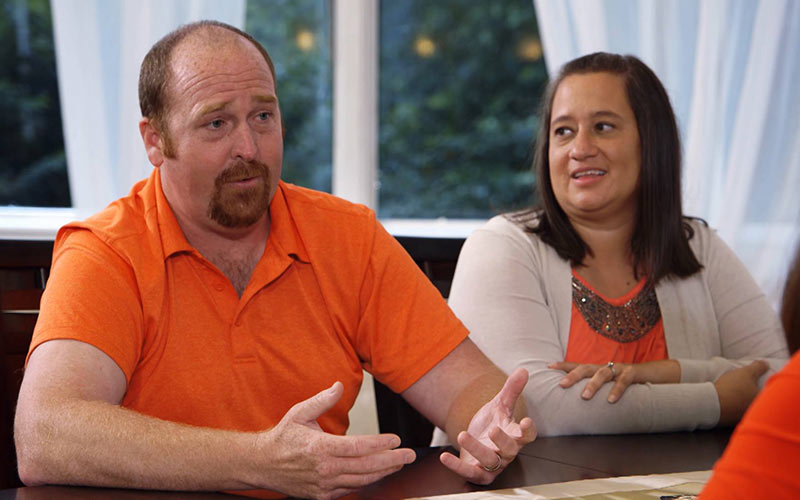 Bo and Christie McMichael during their final conversation with the Benner family on Wife Swap. (Photo by Paramount Network)

The reboot of Wife Swap moved from CMT to Paramount Network, a cable channel that used to be Spike but now insists it is “a premium entertainment destination that pushes the limits of story-telling with bold original scripted and non-scripted series.”

Wife Swap is, well, none of that. Not bold, not premium, just flimsy and without any actual story. Cymbal crashes and sudden revelations do not make for narrative arcs, and certainly not for growth and change.

While the show has made efforts to move beyond its archaic title, the episode titles have “vs.” in them, and it’s clear that’s the focus and primary concern: conflict.

As before, the families have been cast and paired up for extreme conflict: in ideology, and in the types of families: conservative Christians versus gay dads! YouTubers versus an off-the-grid family!

The family members who’ve swapped homes are still mostly wives, but not entirely: the premiere has a stay-at-home dad who swaps with a stay-at-home mom, while future episodes have same-sex couples. The show’s announcement promised this:

“Each episode of Wife Swap takes two families from very different walks of life and switches spouses, regardless of sex, to discover there is often more that unites us than divides us. The families will face contemporary hot-button issues such as politics, classism, gender and race with the end goal of finding common ground.”

The actual reality show feels about as “contemporary” as the word “hot-button,” and its idea that families can be more than just traditional nuclear families—A woman can work! Kids can have two dads!—would have been revelatory in, oh, maybe 1979.

In 2019, it’s condescension wrapped up in a pretty shitty package. There’s an abundance of editing shenanigans, with audio from different scenes or interviews laid over footage to try to create more tension for viewers.

The heavy hands of producers are all over this, creating scenes that illustrate the differences between the families.

It clings so rigidly to the format that it has no room to show any kind of significant growth or change. First the person who’s swapped families does a few producer-planned activities to experience life in their host family. Then they set the rules, which simply means a few more orchestrated scenes.

That’s it; that’s the end of the swap. The couples gather to bicker before reaching some kind of conciliatory note in the final seconds. It warmed my heart with the heat of at least two wet matches.

Along the way, there is very little attempt at connection or communication—just confrontation, because that makes for better television, or at least that’s the Bar Rescue idea of reality television. The interaction feels so forced and mediated by the production that there’s never a chance for honesty or reflection.

During the first episode, a woman expresses concern about the cost of natural and organic food versus processed food, but she’s in a scene about making smoothies, so a reference to cost and budgets and financial insecurity gets tossed away. Later, there’s a major reveal about why someone behaves the way they do, and it makes no sense why that person didn’t say anything about that earlier—though it makes more sense if all of the participants’ contact with each other was on camera while they were just being told what to do.

The show pretends to have moved past traditional gender roles, but ends up reinforcing them in the same way. In the premiere, the editing mostly mocks the perfectionist mother who has her kids eat healthy food, and exalts the stay-at-home dad who goofs around with his kids instead of doing anything productive.

Wife Swap is too busy trying to heighten and exploit differences to really explore the “common ground” it pretends to seek.

The episodes do end with brief acknowledgements that the family members have learned something valuable from the experience or from the other family taught them. But after an episode of pointless bickering, tacking on a sentence with swelling music is just an empty gesture.

The one part that does feel earned is the greater appreciation family members have for their loved one, but I also read that as Oh finally we’re done with this crap show!

Next week’s episode includes one participant who’s a grotesque “old fashioned” “macho man in charge,” as the narrator says. Jack Moon insists “women are men’s helpmates,” demands his wife wear makeup and knock before entering rooms, and slaps her butt as if this is comical.

The woman who’s swapped into his home, fire chief and gym owner Halani Lobdell, asks Jack to wear makeup and clean the house. She later tells Jack’s wife, “I just wanted him to walk a day in your shoes, period.” But Jack refuses, and later, even pulls off his mic and storms off.

“This is so ridiculous. Why am I here?” Halani asks. “This is stupid, this whole thing is stupid.”