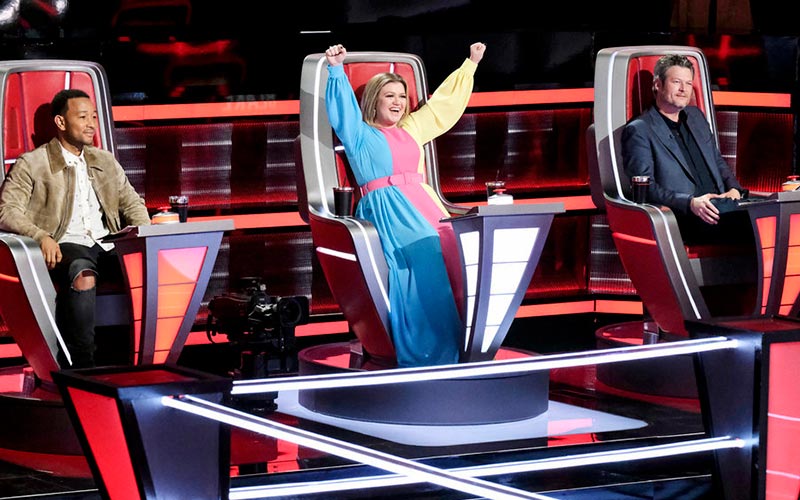 This week, both The Voice and American Idol had their lowest-ever ratings as television shows.

Both were up against the NCAA basketball championship, which is tough competition for live viewing, but the trajectory for both is still down, down, down: from last year, and during the season.

The two shows both still air two nights a week (four hours for Idol, three for The Voice). If that wasn’t enough fatigue, they compete head-to-head on Monday nights at 8, which is—what’s the word—dumb.

Today, The Voice announced its new battle round format: live, head-to-head face-offs between opposing members of other teams, in which viewers will choose the winners live.

Those battle episodes will air over four episode, starting next week and continuing the following week.

The battles will be broken into two groups: 16 singers competing each Monday, and learning their fate the next night. There will be a new set on which “artists will be seated by team on dramatically lit benches around each side of the stage,” according to NBC.

Here’s how the round will work:

“In every Cross Battle, two coaches will go head-to-head in a ‘live school yard pick,’ each selecting one artist from their team to go up against another team’s artist. Each artist will perform an individual song, and their fate is in America’s hands to decide the winner.

On the Tuesday results shows, host Carson Daly will reveal the winner of each Cross Battle, and 16 artists will advance to the next round through America’s vote. For the first time ever, each coach will also have the opportunity to save or steal eliminated artists live in the moment. The coaches will have one save and one steal to use over the course of the Cross Battles, and they will only have ten seconds to decide if they want to push their button to save or steal an artist.”

That’s a decent change to the format: It means the battle rounds won’t just cut contestants from each coach’s team, but will instead leave it up to viewers, plus saves and steals.

That means the top 24 performance shows could begin with uneven teams—instead of forcing equal teams with weaker singers on one team and better singers going home.

Still, it’s hard not to read this as completely desperate. Here are the headline and four subheads from NBC’s press release:

‘THE VOICE’ TO DEBUT ALL-NEW, GAME-CHANGING LIVE CROSS BATTLES ROUND IN WHICH ARTISTS FROM OPPOSING TEAMS COMPETE HEAD-TO-HEAD LIVE FOR AMERICA’S VOTE

For the First Time in “Voice” History, Coaches Will Select Artists from Their Team in Real Time to Compete Live Against Artists from Other Teams

In Another Unprecedented First, Coaches Could Enter Top 24 Live Show with Uneven Teams as America Decides Winner of Each Cross Battle

The network released this promo, showing coach Kelly Clarkson explaining to the singers that they won’t know their competition until they step out on stage.

And for the record, here’s how the networks are spinning their ratings. Both of these are from press releases sent today.

“So far this season, The Voice has averaged a 2.2 rating in adults 18-49 and 11.4 million viewers, according to ‘live plus seven day’ Nielsens for the Monday edition, leading NBC to dominance as the top broadcast network this season on both Monday and Tuesday nights. Through the six ‘Blind Auditions’ episodes of the current Voice 16 cycle, the show scored a 3.2 rating in ‘live plus seven day plus digital’ results, for a 10% increase on the 2.9 for the fall cycle. This marks the first time on record that a spring cycle’s ‘Blind Auditions’ telecasts have grown versus the prior fall cycle’s in L+7+digital.”

“Despite airing against CBS’ broadcast of the men’s NCAA Basketball Championship from 8:00-10:00 p.m., ABC’s American Idol rose week to week with Total Viewers (+3% – 6.4 million vs. 6.2 million)and held steady with Adults 18-49 (1.0/4 vs. 1.1/5), narrowing the Adult 18-49 gap with The Voice to just 2-tenths of a rating point versus 5-tenths the prior week for its closest finish this season with the NBC unscripted series. In addition, ABC’s American Idol beat NBC’s The Voice for the first time this season in Adults 18-34, leading by 17%.”