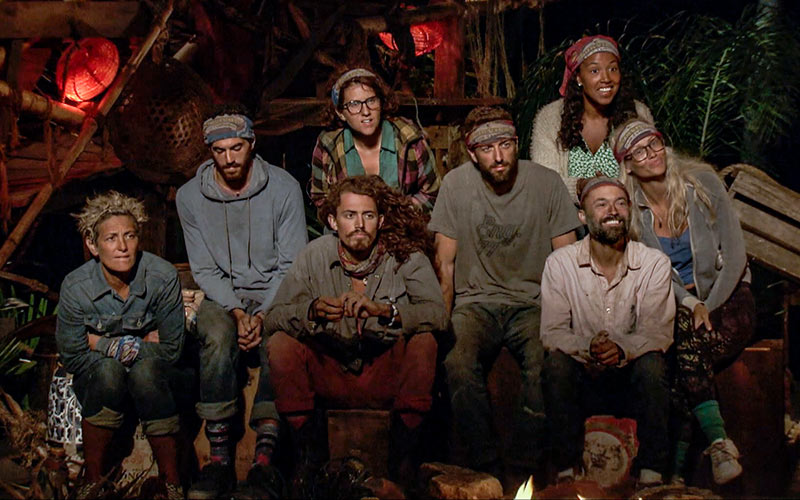 The Survivor: Edge of Extinction jury during episode 11, when it already had eight members—more than the seven-person Survivor Borneo jury. (Image from Survivor via CBS)

Do you know how this whole Edge of Extinction thing will play out? Will there be another chance for someone to re-enter the game? Will all of the people there now be the jury? That would be highly unusual with the entire cast participating down to the last day. —Eugene

“Highly unusual” is definitely a good description for having 72 percent of the cast on the jury, but that is exactly what will happen on Survivor Edge of Extinction’s finale.

There will be one more opportunity for a player who’s been voted out to re-enter the game, though it’s not yet clear when that will happen. Most likely, it’ll be during the penultimate episode or at the start of the two-hour finale.

What happens to everyone else after a player wins their way back? They stay, too! They’ll still be the jury—although presumably, they’ll finally get to go to Ponderosa and have real food, rather than be stuck on Reem Island.

Last summer, when news of this twist was first revealed, I wrote, “Yep, the entire Survivor 38 cast might still be on the show during episode 14.”

Of course, we’ve lost two pre-merge players, who both quit and left right after the merge, but it seems like 16 people will be there for the finale.

For some other fun facts, the Survivor: Edge of Extinction jury had eight people on it last week, and will have nine for the May 1 episode, adding a 10th.

Asked by Dalton Ross about how much time is spent with the jury/Edge of Extinction residents, Jeff Probst said:

“We’re up against a time element as we only have so many minutes in an episode. So the strongest stories always win out. But we’ve been extremely happy with how Edge has played out. Fans seem to enjoy it and I think the players are proving we made great choices in putting them on the show. Edge is no joke. That is some tough living out there, but amazing things happen when you push yourself and we’re seeing that every week.”

After the merge, EW’s Dalton Ross asked Jeff Probst the same question: “Were you all concerned about having someone like Reem (who was voted out on day 3) voting on the million-dollar winner even though she has been out of tribe beach action for so long? Also, do you even have enough jury seating?!”

Probst answered first with a meditation on fear and creativity:

“The idea for Edge of Extinction came in a bit of a flurry. It presented itself incredibly fast and arrived pretty much fully formed. All the elements — the desolation of Extinction, the secret nature of it, the two shots to get back in, and the possibility of everyone being on the jury — was just part of the package that the creative winds sent our way. We tend to look at these kind of ideas as gifts rather than risks.”

He eventually answers, and says that the jury size was of zero concern:

“no, we weren’t concerned about the jury! As for the jury seating… we have this little team called the Survivor art department, and they can literally do anything. And we have more big ideas in store!”

The real problem for me is not the number of chairs, but how much is gained versus what is lost by keeping so many people around.

Instead of getting to know the players who may not have received focus earlier on, the editing had to divide its attention between 18 people week after week. That’s very different than old-school Survivor, where voting someone out decreased the number of people who were on the show, meaning we deepened the time we spent with them.

As the show has evolved, so has its editing, which for me has been less-than-ideal these past few years (excepting Survivor: David vs. Goliath, which was a terrific season). That’s because it gives disproportionate attention to some people and ignores others. This season, it’s focused on people we already knew, the four returning players.

But as we saw in a scene with Kelley on Edge of Extinction last episode, keeping players around can give us new insight, like what playing Survivor is like, and how it affects its cast members.

So, like everything else, there’s a trade-off involved. That’s true for our next question, which is about…

All the things Survivor has lost, and whether they’ll return

Hi. [I] noticed not every season they have Survivor auction for food, and haven’t had final 3 or 4 walk and flashbacks of each snuffed torches of each Survivor. Rites of passage, fallen torches. Survivor they used to have gross challenges in which everyone had to eat gross stuff. —Jonathan

While this isn’t exactly a question, it’s an observation I’ve noticed people make frequently. That’s because, over its 38 seasons and 19 years (!!!), Survivor has shed a lot of its core elements, even as it adds new ones.

The three you’ve mentioned have been gone for some time:

As the eating challenge proves, things can and do return; it seems like something the production doesn’t want to do every year, but will return to occasionally.

With the loss of other elements, host and showrunner Jeff Probst frequently cites the length of each episode as the reason things have been cut.

Among the things cut this season was footage of the players voting at Tribal Council, so we could find out how each person voted. “Issue is time,” Probst wrote. (The voting confessional footage eventually returned.)

A fan recently asked about Rites of Passage, and Probst replied with this:

Probst also encouraged fans to lobby CBS for 90-minute episodes, saying that the production has enough content to fill that time.)

I’d volunteer to find a minute or two every episode to cut out just to start every episode of Survivor with that again, though I also recognize that with less than 43 minutes per episode, time really is limited, and these are not easy choices the editors and producers are making.

By the way, if you want to relive the various theme songs used over the years—the music changes to match the location and/or theme—Survivor Wiki has recordings of every season’s version.

I think it’s fair to say that, with these deleted elements, some Survivor fans miss them, others are thrilled for their absence, and others don’t even notice they’ve been gone.

While the eating challenges gave us some iconic Survivor moments, particularly in season one, I don’t miss them. That’s in part because Fear Factor did those to an extreme, and also because, for me, today, it feels weird to declare another culture’s food “gross” and then make entertainment out of someone gagging on it.

I do miss the auction, but I don’t need to see it unless it changes. The choices the production made with the auction killed it for me: By introducing advantages in the game as a potential auction item, people were reluctant to bid on anything else. While I appreciate players who want to play the game, it also drained out most of the fun.

I’d love to see the auction return as just a plain old reward, with the cast bidding for food, luxury items, or mystery items that could be zonks.

I also miss the Rites of Passage, the segment in the finale when players would walk past the torches of those they’d voted out of the game. We’d hear from the final two or three, and then—starting with Survivor Africa— from the player themselves, who reflected on their time on Survivor and what they’d learned.

Of course, the Rites of Passage would be unnecessary on Survivor: Edge of Extinction, because nearly everyone voted out of the game is on the jury (minus two, of course). Even before this season, as juries have gotten bigger, cast members are on screen for longer periods of time—well, unless they’re ignored entirely.

Besides taking up too much time, Rites of Passage isn’t coming back because, Probst said five years ago, at the end of Survivor Cagayan:

“It’s done. It meant more in earlier seasons; it just doesn’t have any value. So unless we find a way to make it more compelling, I think we’ve seen the last of it.”

The auction, however, may be making a return. Jeff Probst recently responded to a viewer who asked about it:

Recommended: Survivor’s composer Russ Landau on why he left the show, and how Survivor’s music is created