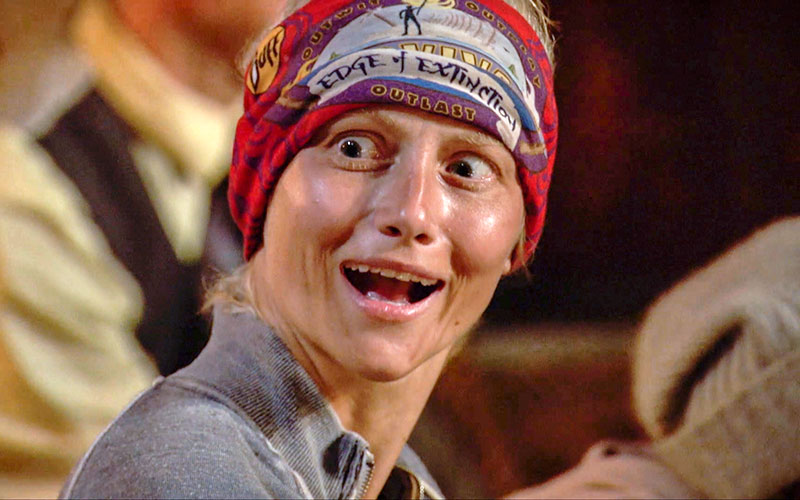 Kelly Wentworth reacting to some of the craziness of the Survivor: Edge of Extinction episode 9 Tribal Council (Image from Survivor via CBS Entertainment)

Survivor: Edge of Extinction made it clear that we were in for a wild Tribal Council when the merged tribe started their walk just about halfway through the episode. This was intended to be half of a double episode, which is why there wasn’t a reward challenge, but there was so much that it became its own full episode instead.

Most of the episode was strategic conversations, and those paid off. What followed wasn’t a live Tribal Council, it was electrified. Instead of whispers, we had outright admission of a plan (to vote out David) and the formation of a new super-coalition that banded together and voted out Julia.

Those 20 minutes were full of so many wonderful moments, and those started even before the alliances shredded and reformed themselves.

For just one example, there was David’s metaphor about minnows and sharks, and Probst asking him if it was true, leading to the best anecdote of the season: “Yeah. It was while I was taking a poop, but yeah.” (More on-screen acknowledgment of the aqua dump: how Survivors poop.) And then Rick Devens extended the metaphor and said he might be the poop!

First, though, Probst began Tribal Council with a subtle lecture:

“There’s an implicit agreement on Survivor, which is, nobody is to be trusted, and yet everybody will choose to trust one or more people. It’s this implied agreement that makes the blindside possible.”

This sounds like him saying, I know David is about to get blindsided, or perhaps the people who don’t know he has an idol will be blindsided. But even he didn’t know how that plan would fracture right in front of everyone.

The dominos began to fall with tears from Julie, who broke down again about being alone and isolated and paranoid, and while she was doing her thing, Kelley used that time to check in with Julia to see if they were okay (with the David vote), a conversation Probst called out.

Sensing an opening, Rick pitched to the seven (“take the power from Kama”) and clearly worried Julia (“You’re such a passenger, Rick”).

And then, Julie loudly bailed on her alliance, people stood up, and everything fell apart. There was a surprising amount of fuck it, whatever! honesty, such as this conversation:

David: “What was the plan tonight?”

But in the most shocking part of any Tribal Council I’ve seen in a long time, Jeff Probst said, “I wouldn’t want to ask a question. It’s just way better just to watch.”

At the end, Probst said, “I’ve never seen anything like it.”

Then Wardog said, “Let’s vote,” and Julia, winning me over forever, said, “Shut up, Wardog.”

Rick and David joined their idol fragments and gave David immunity, but it didn’t matter: It was an almost unanimous vote for Julia. Only Aurora didn’t vote for Julia, and she and Julia voted for two different people (Kelley and David).

At the end, Jeff Probst said, “One of the single craziest Tribals I have ever been a witness to.”

Julia reveals why she was targeted

Imagine, for a moment, if the editing hadn’t spent most of the season ignoring Julia, who was both a central player in the back-and-forths and the target of the vote.

Imagine if we even knew who Aurora was.

Let’s turn to Julia for some insight into what happened that didn’t make it into the episode:

Julia also confirmed that the editing was accurate about what triggered the chaos.

Update: The plan was actually to vote out Kelley, which both Julia and Victoria tweeted about.

What happened before Tribal Council set up a potential David blindside, though there was the alternate possibility of voting out Kelley—prompted, it seemed, by Julia worrying that Lesu would pull in Ron and Julie. (Ironically, that’s a version of what happened later.)

The possible switch from David to Kelley annoyed Gavin, who wanted to vote out David. (Gavin also won the stand-and-balance-zzzzz immunity challenge, which we could have also skipped.) But since David was the ultimate plan, it seems the Kelley conversation didn’t go anywhere and was a bit of a red herring for us.

Meanwhile, Rick and David reunited and planned to take advantage of Ron and Julie being left out of last week’s blindside, which left them both of the Kama outcasts in literal tears at various points.

Julie breaking down in tears at the well was perhaps the key, pivotal moment of the episode. She was worn down—understandably!—and felt disconnected from her alliance and in a place where she couldn’t trust anyone. Also understandable!

She asked: “How does the paranoia ever go away?” I don’t think it does.

Also not going away is the nickname “Wardog,” and I should note that he is now calling himself “The Wardog,” as if Wardog was a noun.

I should also note that I am over nicknames on Survivor, because they feel both ridiculous and forced.

Because the editing ignored Julia for most of the first half of the season, I think the editors should now make up for that lost screen time. Every time Wardog says anything, especially his own nickname preceded by “the,” a bubble should pop up with Julia saying, “Shut up, Wardog.”

This story has been updated: There was not a reward challenge that was skipped; instead, this was intended to be half of a double-eviction episode, but was expanded to a full episode instead because of the Tribal Council drama.