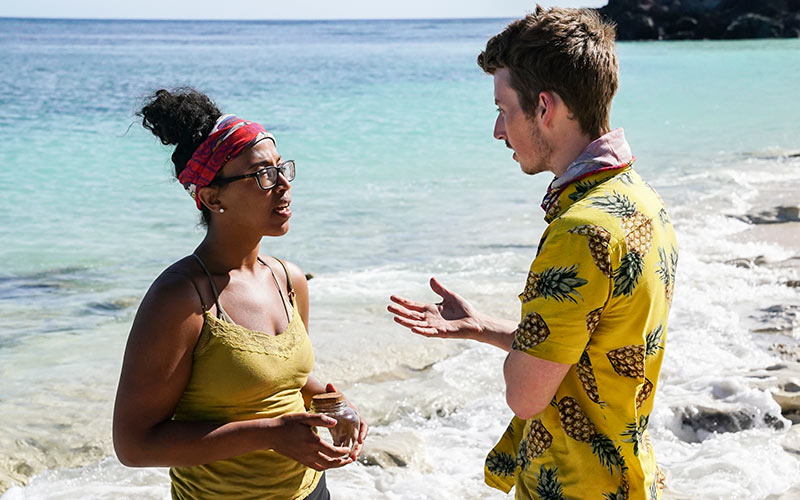 Julia Carter and Gavin Whitson discuss whether or not they should turn against their own alliance on Survivor: Edge of Extinction's eighth episode. (Photo by Robert Voets/CBS Entertainment)

What Survivor: Edge of Extinction lacks in character development and coherent narrative, and rewards that anyone would want, it made up for in witty one-liners this episode, which had an abundance of them.

The episode also had a delicious finally! blindside—which made this an entertaining ride, complete with a (brief, ultimately benign) medical situation and some Extinction Island action.

Despite the blindside, I can’t quite shake how little any of this seems to matter, since exiting the game doesn’t mean exiting the show, and being on Extinction is not at all the same as being (mostly silent) on a jury.

This cast may not have, you know, screen time or names we recognize (there just isn’t enough time in every episode to include 29 minutes of Wardog babbling plus everything else), but they do have some gifts with one-liners and metaphors.

So I’ll recap in the form of some of my favorite lines. (Disclaimer: I’m not going to quote all of them—if you want to see all of them, watch the episode!)

First, let’s check in with Ron, who has suddenly appeared to start acting like a sociopath:

“The last thing I want is for Wentworth and Lauren to be strong. I want them feeling lost and lonely, because I’m the puppet master. I’m trying to break them down.”

How’s that working for you so far, Ron? Yes, Ron was on the wrong side of the vote, one of only four people to not vote for Eric. And they could be coming for him next. Or they could reconfigure and return the game to voting coalitions instead of tribal alliances, which I’m hoping will be the case.

Long before the blindside, Devens chatted with to Wardog, faking him—and me!—out beautifully:

This makes considerable sense. Although so does Wardog, at least when he said:

There was logic in his argument that Devens and David were just Kama pawns, and would be picked off as soon as they were no longer useful.

As Kelley Wentworth—whose fly-swatting during an interview was more entertaining than entire episodes of this season— told David:

“You know how this game works: Either we come together and try to take one of them out, or we’re probably going to go one by one.”

This is a solid and accurate argument. Now was the time for them, and David seemed convinced—at least enough to try to convince Rick Devens that being part of Kama was not going to get him anywhere long-term (“You’re not getting numbers, bro”).

This created a wedge between the bros because each thought the other was wrong. Or, to use David’s perfect lines:

“One of us is drunk right now, and I don’t know which one. I think I’m the sober one; it might be you.”

The challenges and the pleas

What was interesting, though, was that the vote didn’t hinge on David and Devens’ flipping. They split during the vote, and perhaps for good: David wouldn’t even give Devens back the half idol that Devens gave him during the previous episode.

Instead, the votes to nail Eric came from inside Kama: Julia and Gavin (inspired by Wardog, or so the editing suggested) and Victoria (apparently reluctantly) turned on their own.

Stephen Fishbach argues that this was absolutely a “disastrous” and wrong move for Julia and Gavin; his argument is compelling, but I also kind of don’t care, because I’m just desperate for this season to have some forward momentum, like it did during its best two episodes.

In my mind, this breaks open the game so it’s no longer just a dominant tribe/alliance Pagonging a smaller one, which may be smart strategy but is quite boring at this stage of Survivor’s life.

Also, this cast is talking about the impending family visit like they’re on Big Brother and know exactly what twists happen on what days. If you’re playing Survivor by a calendar of rewards, you’re not playing a game I’m interested in.

I also appreciated how the decision to fracture Kama didn’t come easily, as we saw with Victoria’s reluctance, and Julia basically tested Eric by floating David’s name. Plus, as Julia said—in a confessional!—about Ron and Eric:

“They’ve taken advantage of the power this alliance has gotten.”

They joined with Aurora, a person who appeared on this season just in time for the worst-timed plea deal in the history of Survivor: at the immunity challenge, after Lauren fell over and was laying on the ground, unconscious.

Here’s Julie, talking to Aurora, and then Kelley, while Aurora started to negotiate with Victoria to drop out of the immunity challenge moments after Lauren toppled to the ground:

“Aurora, just wait. Aurora, it’s not the time. (Whispered to Kelley, with tears) She’s passed out. Can somebody tell her? She’s not awake right now.”

This was definitely scary, but Lauren cut the tension when she finally woke up and spoke one word:

Earlier, to file under #shade, Probst said this during the immunity challenge:

“We’ve already lost four of the fittest people in this game.”

Immediately afterwards, Rick Devens dropped out, and said that he was the fifth fittest person. David said, “Devens, I hope you didn’t do that just for the joke.” Devens: “Anything for the joke.”

Speaking of jokes and challenges: I long for a reward challenge in which 1) individuals, not arbitrary teams, compete for reward, and 2) the rewards aren’t food at camp. Probst described the reward like this:

“Chinese takeout. Waiting for you back at camp. It’s like a Wednesday night back home watching Survivor, order in.”

I’m sure that, for people who haven’t eaten real meals in weeks, anything is welcome. But let’s not pretend that the flying around the world to Fiji and receiving a cold version of the lukewarm food you eat on your couch counts as a “reward.”

Although, it actually looks better than the cold pizza and other craptastic rewards the cast has received recently:

Meanwhile, on the place where everyone always goes

On the Edge of Extinction, new resident Joe said:

Yes, sir! Jeff Probst designed it just for you!

God also delivered more advantages, in wine bottles. There was a clue about steps and back, which Aubry figured out. But first, she figured out that, no matter what, she was had a strategy for when she received that clue, because she wanted to get Survivor’s equivalent of a $15 DVD player first:

“You best be running, because it’s like Black Friday and you better get the toy first, because someone here’s going to get it.”

Aubry received access to a private practice arena for the next challenge. It seems really early to get to practice. And also how is it that only she can go to this place? Wouldn’t that make everyone else immediately suspicious?

She also received an extra vote, which she sent to Aurora, a person who is on this season. Aurora immediately assumed it was from Joe, and then added Aubry’s name as an afterthought.

Speaking of afterthoughts, here are a few additional terrific one-liners.

Reem, when Eric arrived at the Edge of Extinction and immediately proclaimed that it wasn’t bad:

“I have no reason to lie; I’m already against you guys.”

“Shoot your shot as long as you’re not shooting yourself in the foot. I want to keep my feet tonight.”

David at Tribal Council, after talking about how the current players are either “pilot or passenger,” and admitting “I am a passenger tonight,” said:

“Blank sheets of paper”! Was it obvious even then how this season would be edited?