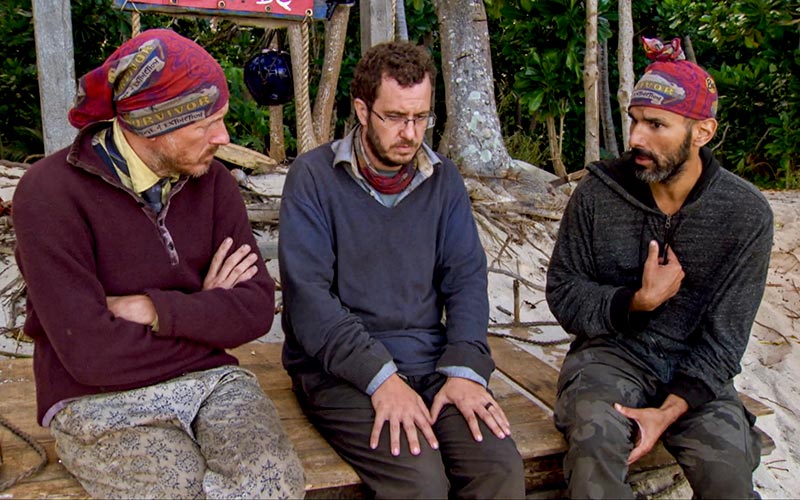 “It’s going to be so tempting to take each other out,” Rick Devens said to Ron and Wardog on Survivor: Edge of Extinction episode 11. He was trying to convince them to band together: “We’re each other’s biggest threat, and we’re each other’s only hope.”

But hope and a bro who’ll smear mud on your back was not enough when the entire tribe votes against you, which is what happened to Wardog and Devens.

And it probably would have happened to Devens first if he hadn’t won immunity: they’re the threats. Not even Wardog’ s attempt to gaslight Gavin—Wardog tried to be mad at Gavin, even though Wardog flipped on him—could change that.

After Wardog turned on his alliance last week and voted out Kelley, the same people he voted with last week turned on him and blindsided him, revenge for Kelley’s vote—or perhaps just the best choice. “I want his head on a silver platter,” Gavin said.

Even Wardog agreed: “If people are playing smart, they’re votin’ out the Wardog, but I’m banking on stupidity tonight,” he said. After Jeff Probst snuffed his torch, he said, “Ya’ll made the right decision.” It’s hard to disagree. Wardog is not my favorite character ever, but his take on the game was typically sharply on point.

Before the immunity challenge, Devens seemed like he was toast. When Julie, Lauren, Wardog, and Devens won a reward, the losers went back and decided to vote out Rick Devens.

Meanwhile at the mud bath reward, Julie and Lauren discussed voting him out seconds after he dismissed them both as non-players. The editing seems to be signaling that his time riding high is over; he’s dismissing people and out of the loop, as he was the only person in the tribe to not vote for Wardog (I mean, besides Wardog).

By the way, with all these flips back and forth, shouldn’t this season be more exciting than it is? I keep coming back to Extinction as being the reason why it’s not—in part because people don’t really get voted out of the show/game, and in part because the editing has been so lopsided.

The only interesting thing about an otherwise nothing Tribal Council was the revelation that Gavin hadn’t talked to Wardog since the flip: “There’s talking to someone, but I feel like Wardog was talking at me.” Kelley cheered him on from the jury stadium.

While this was a relatively straightforward and easy episode, let’s celebrate: There was an actual reward! A trip to a place! Mud baths! Sandwiches! I was so excited that I will pretend I don’t miss individual reward challenges where the winner chooses who goes with them!

And there’s more! We also got an immunity challenge during which people didn’t have to stand in one place with balls in their hands! They got to do things, many things! There was action and drama! Woo hoo! And we haven’t even talked about Reem yet!

“You’ve just gotta laugh at it all, because it’s a game, right?” Aubry said on Extinction. That’s a great attitude, but a lot of time was spent on how difficult it is to get to that place—especially after going to rot at the Edge of Extinction.

Its newest arrival, Kelley, got a lot of attention, more than I remember the other returnees getting once they arrived there, and definitely more than some of the newbies. I wonder if that’s setting us up for her eventual return to the game. (Just a guess; I know nothing.)

I appreciated the extreme close-up on her cheek and a single tear paired with her meditation about how typical Survivor vote-outs involve burying feelings in food, while going to Extinction instead of Ponderosa means being stuck with your thoughts and regrets.

Yes, Kelley got quite the hero’s edit on Extinction. Well, except for Reem.

I am showing up for the Edge of Extinction for Reem and Reem alone. She is its star—and not just because she’s been there since day one and is basically its mayor.

Her quips, whether delivered in interviews or directly to someone’s face, cut right through the bullshit. Reem said Kelley “killed my Survivor dream” and called Kelley out on that, and gave us a nice recap, too:

“Finally, Kelley gets voted out. I don’t know what the hell took them so long. I was trying to do that on day three which ended up getting me voted out. I mean, bravo, finally—Kama’s so stupid.”

But Reem also acknowledged the emotional toll the game takes: “everybody knows there’s a healing process once you’re here, but it takes time.” She expressed her frustration with Kelley, and then didn’t let Kelley burn to a crisp in the sun. Reem contains multitudes.

Best of all were Reem’s final words—literally, the final words of the episode, even following Wardog’s exit confessional: “Listen, dude,” she said to Wardog upon his arrival. “You can bet your rear end you’re gonna get it from me tomorrow, just so you know.”

I cannot wait for that.

Considering today’s news that the fall season of Survivor—which is currently filming—will bring back two former Survivor winners as mentors, I’d so much rather the fall season bring back Reem for color commentary: at challenges, at Tribal, at Extinction, wherever.

And at this point on Survivor: Edge of Extinction, I’d be more than happy to see her come back in and win the game, which is the opposite of how I thought I’d feel about Extinction players returning. There’s just something about her combination of rancor and resilience that’s perfect for this frustratingly imbalanced season.